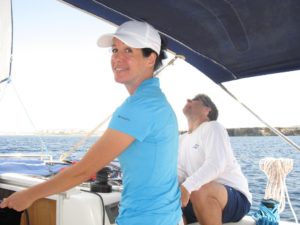 Christa (The Admiral) grew up in a tiny village of Meductic in rural New Brunswick. It has the distinction of being the smallest incorporated village in NB, and is the home to Sabian Cymbals. She recently retired from a Federal Government Director’s position while we figure out how to try and become cruisers. She holds the International Certificate of Competence (ICC), is American Sailing Association (ASA) 101/103/104 certified and has a Royal Yachting Association (RYA) Coastal Skipper qualification as well. Christa speaks English, French, some Italian and is currently learning Spanish..and she’s an awesome cook, sometimes. 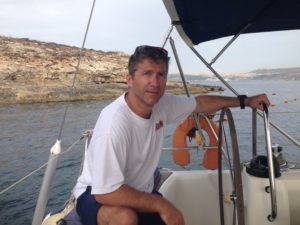 John (The Captain) grew up on the water in the small town of St. Stephen on the Maine-New Brunswick border. He is a retired Royal Canadian Air Force (RCAF) Helicopter Pilot who decided he wanted to be a sailor when he grew up. He has completed numerous Canada Power and Sail (CPS) courses, holds the International Certificate of Competence (ICC), and is  Royal Yachting Association (RYA) Coastal Skipper qualified. Since his retirement, John has become an Emergency First Responder, PADI Rescue Diver and PADI Divemaster.