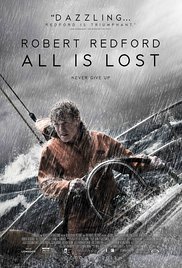 All is Lost is a movie staring Robert Redford about a solo voyage in the Indian Ocean. You may have heard about this movie from a couple of perspectives.

It was lauded by film critics about the great job the production crew did, and how Redford is still a great actor who is able to hold the audience attention, even when there are no real lines in the movie.

The other perspective was the heat that the film got from actual sailors because it showed so many things that an actual sailor would not be doing. Simply Google “all is lost criticism” and you’ll find plenty examples. There is even one in Vanity Fair.

Another one of these movies that may be mixed for couples that are considering going cruising. The guys may like the man-vs-nature aspect, while the girls may  see it as a confirmation of all their fears about sailing.

There are plenty of film sites that will discuss the merits of the movie itself. We tend to look to Rotten Tomatoes and IMDB.

From the IMDB site:

An unnamed man (Redford) wakes to find his 39-foot yacht taking on water after a collision with a shipping container left floating on the high seas. With his navigation equipment and radio disabled, the man sails unknowingly into the path of a violent storm. Despite his success in patching the breached hull, his mariner’s intuition and a strength that belies his age, the man barely survives the tempest. Using only a sextant and nautical maps to chart his progress, he is forced to rely on ocean currents to carry him into a shipping lane in hopes of hailing a passing vessel. But with the sun unrelenting, sharks circling and his meager supplies dwindling, the ever-resourceful sailor soon finds himself staring his mortality in the face.

Its available for sale on Amazon new and used in the typical formats you find for most movies there. It’s also available for free if you already have an Amazon Prime

If you prefer iTunes, it’s available there too.