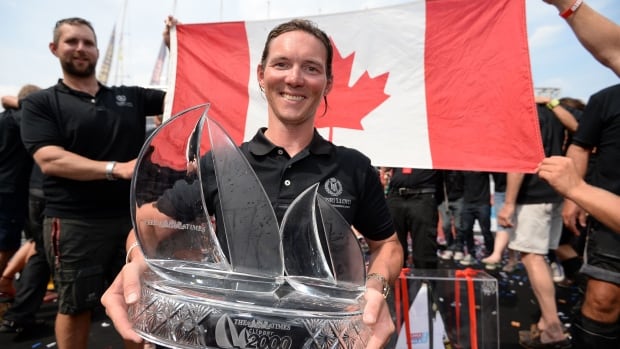 Henri Lloyd skipper Eric Holden celebrates with the Clipper Race trophy on the podium after the Round the World Race Finish in London. (EMPICS Sport)

Thousands lined the banks of the River Thames near Tower Bridge to welcome a parade of a dozen 70-foot yachts and 270 crew members back from a round-the-world race — and a B.C. sailor commanded the yacht that led the pack.

Thirty-four-year-old Eric Holden of Vancouver was showered in champagne as the Clipper Race trophy was presented to him and the crew of the Henri Lloyd in London today.

The Clipper Round the World event covers 16 individual races over 64,300 kilometres with an overall winner in a Formula 1-style scoring system. It joins together amateur sailors — some who’d never even been on a boat before — with an experienced skipper. 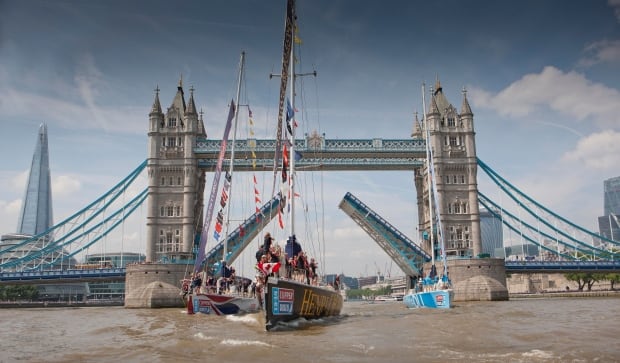 The Henri Lloyd leads the pack as the top three finishers pass under London’s Tower Bridge at the Parade of Sails ending the 2013-2014 Clipper Round the World yacht race. (EMPICS Sport)

Speaking with CBC News on the phone from the celebration party, Holden called the experience life-changing and said the support from Canada has been superb.

“We’re not a huge sailing nation, and the support has just been growing and growing every leg, every success we’ve had and that’s really been keeping me going through some of the tough times,” he said.

“If I’ve encouraged any people to get out there and try sailing, or offshore sailing in Canada, then that will just be a huge bonus for me.”

Holden was the only Canadian skipper in the race, and was joined on the 11-month journey by a crew that included four other Canadians: nurse Fiona Garforth-Bies, of Bragg Creek, Alta; heavy duty mechanic James Dick, from Victoria, B.C.; construction inspector Michael Jauncey, from Toronto; and recent college grad Morgen Watson, of Calgary.

Holden, who was named Sail Canada’s sailor of the month for both April and May, sailed for Canada’s national team for five years. He was the weather forecaster for the Canadian sailing team at the 2012 London Olympics.

Many of the race’s crew members, who are allocated to teams to ensure a similar skill set across the fleet, had no previous sailing experience. They undergo 26 days of training before setting sail.

‘I don’t know how we can be labelled an amateur team any longer, considering all we have been through together and how they have risen to every challenge. Many top sailors will have gone their whole careers and never experienced conditions like these.’– Eric Holden, 2013-2014 skipper of the Henri Lloyd

The race literature warns: “While the crew may be amateur, no one has told the ocean that. The sea does not distinguish between Olympians or novices and if the Southern Ocean, the Pacific or the South Atlantic decides to throw down the gauntlet, the crews need to be ready to face exactly the same challenges as those experienced by the pro racer.”

Holden told The Canadian Press earlier this week that he was proud of how well his crew fared in the extreme conditions they faced, saying they developed a good respect for Mother Nature. They saw everything from winds of 160 kilometres per hour and “mountainous seas” in the Southern Ocean, to lightning, thunderstorms and waterspouts in the tropics, to the dead wind in the Doldrums — an equatorial region known for bringing boats to a halt.

During a particularly challenging stretch between Cape Town and Albany, Australia, Holden wrote: “The team are loving these conditions and doing everything I could ask of them. I don’t know how we can be labelled an amateur team any longer, considering all we have been through together and how they have risen to every challenge. Many top sailors will have gone their whole careers and never experienced conditions like these.” 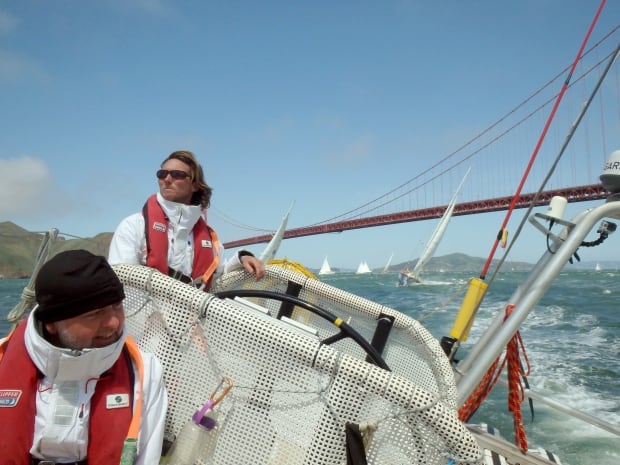 Henri Lloyd skipper Eric Holden guides his team’s sailboat near the Golden Gate Bridge on April 19, 2014, for the start of Race 11, from San Francisco to Panama City, in the Clipper 2013-14 Round the World Yacht Race. (Clipper Ventures/Canadian Press)

The gruelling race was conceived in 1995 by English sailor Sir Robin Knox-Johnston, who, in 1969, became the first person to complete an individual non-stop circumnavigation of the globe.

Knox-Johnston, who still sails competitively at age 75, chose Holden from some 180 applicants to become the race’s first ever Canadian skipper.

Holden isn’t sure of his immediate plans once the race ends, including whether or not he’ll be part of Canada’s sailing squad at the 2016 Rio Olympics.

“Offshore yacht racing is what I do for a living, and when I’m not racing, I’m doing weather forecasting for other yachts,” he said. “This race has taken up all my energy for the past 18 months, so I haven’t had time to look past the end of this race.”

With files from The Canadian Press