For the last few days we have been waiting for, and then sitting through, a stint of “bad weather” in Thompson Bay Long Island with about 25 other boats.  “Good weather” and “bad weather” are, of course, relative to a specific context or perspective so can be rather meaningless depending on the audience. For example, all the boats are likely staying here for the same reason. On the other hand, anyone that has lived through the so-called “winter bomb cyclone” would scoff at us “suffering” through 30 knot winds, mixed sun/cloud/rain and 25/77 degrees.

Most of the Bahama islands with any population have cell service, so there is no reason why we should be surprised by approaching bad weather. There may be an occasional squall that sneaks up on you, but on the whole we have plenty of information. Obviously the cell system can go down, as it did for a few hours this morning, so it’s important to look out 72hrs or so. There are other options available like the weather report available through our InReach Explorer through it’s Iridium Service, HAM or HF radio (from other sailors with these radios), or ultimately asking someone ashore with access to the internet, television or land line.

Because of what this information was telling us consistently for the last few days, we headed for the very well protected Thompson Bay, with access to groceries, fuel, water, and most other amenities associated with a small town. We have been getting our weather info mainly from four different iOS Apps, The NOAA Weather Prediction Center, and word of mouth in case anyone was talking about something drastically different. 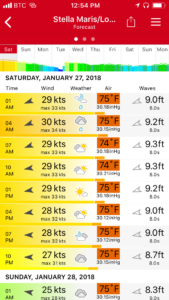 This first one is from an app called Windfinder Pro. Its shows wind solidly from the east, approx 30kts, gusts to 33, some rain, cloud and sun, 75F and 9′ waves if you’re not in a sheltered area, or leeward, of a land mass. 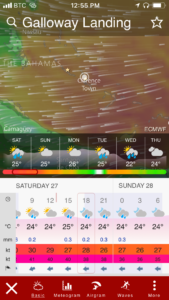 The next one is from an app called Windy and provides pretty much the same information as the previous one. 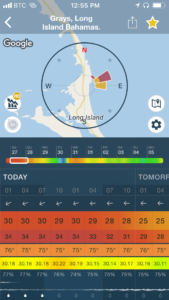 This one is (the other) WINDY app, spelled with caps so you can distinguish them I guess. Again, pretty much the same info with slightly higher gusts. 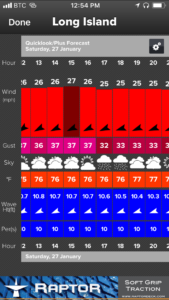 This one called WindAlert, tends to be the most pessimistic of the bunch, and has proven to be the most accurate over the last little while as well. Yesterday it was the only app that predicted winds near 40kts, which some boaters saw on their gauges.

So overall, we appear to have quadruple redundancy with out 4 X weather apps, and today they all appear to agree. The problem is that we don’t know where these apps are getting their data from. If they are all using the same source, there is no redundancy at all, and we could get a surprise. With WindAlert being different most of the time, we don’t think that is the case however it may be a good idea for us to contact the software companies and ask them that question.

As a hedge against this very thing and to get more detailed info, while still in Florida I looked at some aviation weather sources, both military and civilian, that I would have used while still flying. Where we currently are in the Bahamian out islands, that’s not an option since there is normally no weather data available for the smaller airfields. What we can use for more information is easily available from NOAA, in a number of different flavors.

The one I use the most is the NOAA Weather Prediction Center since it provides a graphical representation of air masses and fronts out to just beyond where we are. If I do see something on the apps that describes weather which isn’t consistent with what should happen when a cold front passes, I’ll keep digging for more info.

Here are some other weather-related sites we have used:

The last two have pretty good satellite loops that cover our current area. 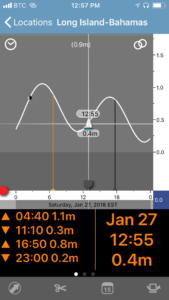 The other thing we have to watch closely are the tides as The Bahamas are notoriously shallow. This is the Imray Tides Planner app which gives you the tides, solar and lunar cycles geo-referenced to your location or a selected location, anywhere on the globe. What’s even better is that it doesn’t need a data connection. It’s essentially a tidal almanac whenever and wherever you need it.

The anchorage could be described as average depth for The Bahamas, but very shallow compared to elsewhere. It’s only 6-8′ when close enough to the shore for protection, so the catamarans with their shallow draft tend to anchor closest. We draw approx 4′, and where we are currently is showing 1-2′ below the keels. That would normally be fine except for the fact we can swing in a radius as big as the anchor chain we have out (approx 120′) and with strong winds, the water can actually be blown out of the bay to make it shallower than normal. An extreme example of this was during Irma when bays went completely dry and people were walking around anchors and moorings.

The lowest water level we saw last night when it was getting “sporty” was 0.3′ below the keels. We never did touch, and if we did, it wouldn’t mean much as we’re in a sandy/grassy area. Over the past month, I dove a couple times to verify the depth gauge, and we think it underestimates by about a foot. We have kind of confirmed this a couple weeks ago when moving through another anchorage while continually showing 0.0 on the depth gauge! A monohull in our current anchorage actually did move this afternoon, as he was bumping bottom in the night and, as he explained, left a nice trench on the way out to mark the spot for someone else.

What does all this mean at the end of the day? Not much in reality. Our anchor and chain should hold us here without issue, well into the 50-60kts range. We’re only a few hundred metres from shore so the waves don’t have a chance to build any more than maybe a foot. So we’re left with the boat yawing and the noise associated with winds gusting as high as 40kts.

The sound of wind in the rigging can be described as familiar to anyone that grew up in an older, Victorian Era home – very noisy, howling and whistling. As a really light sleeper, I tend to chase down any noise that I hear at any time, to try to determine what it is, in order to stop it if possible. Last night we developed two special noises that I left until morning, but am kicking myself for not solving them earlier. 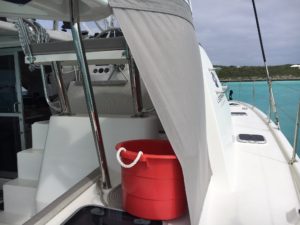 This picture is the lower skirt on our helm enclosure. As we don’t have a complete rear cockpit enclosure, it just terminates to an open edge. Normally this is OK since the aft of the boat is sheltered from the wind. Once we start to hit close to 30kts like last night, the boat yaws left and right, and exposes this trailing edge to the wind, causing it to flap. At certain angles and wind speeds it develops a vibration which transmits through the cabin top, that also happens to be the ceiling of our cabin where we are trying to sleep. This is amplified to sound and feel like we are rubbing the bottom. No problems sleeping through that. The solution? Push the bucket that was catching rainwater, over 6 inches so it tensions the skirt and removes the vibe. Wow, so simple.

The other excessive noise was the forward trampoline, which is essentially like a big sail mounted horizontally. It was being blow upwards each time there was a gust. The forward mounting rings are loosely mounted in a movable track, so the upward movement makes a metal-on-metal crashing/banging sound. This continual violent movement will also create a lot of wear on the trampoline with all its long line and mounting points. 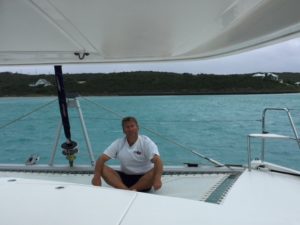 This picture is me sitting on the forward trampoline after checking our anchor bridle lines for chafe, and it dawns on me that I can’t hear that annoying metal crashing/banging while I’m sitting on the trampoline. Amazing. Solution? Find something heavy enough and rain/water resistant to sit on the trampoline to weigh it down and stop the noise. Wow again. 2 bins that are full of tools and 30+ lbs, and the 50 amp shore power cable that weighs almost as much. 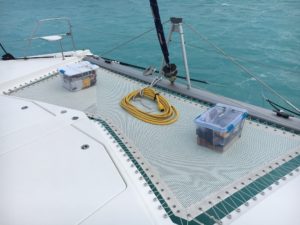 We’re now safe and sound, with only the wind noise and a bit of yawing motion which isn’t really noticeable unless you look outside. Next is how to deal with cabin fever after 48 hours of being stuck on the boat! From the VHF radio traffic, some fellow boaters have mitigated this by drinking their sundowners at noon. So far we have resisted…