When John ordered this book, I was intrigued by the title Get Her On Board. It’s a guy’s guide to convincing a reluctant wife that sailing off into the sunset is a great idea. 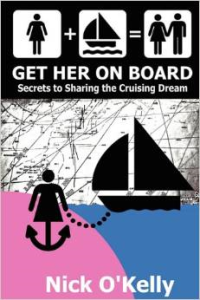 He covers a huge range of topics and offers some interesting advice on how to persuade your wife to become an enthusiastic boater. Some of it works (from my personal experience), for example there’s no better way to have her buy into the idea than to have her “own” parts of the project.

When John & I were building a Cobra sports car a few years ago, it was truly his project but I often puttered the garage around and helped out when I could.

Other women who were really reluctant to have their husbands buy a similar project, changed their tunes significantly (literally their tone of voice changed as we were speaking) as soon as I started telling them how I helped to install the windshield, bleed the brakes, rivet the body sheets, etc. I could see them picturing working alongside their hubby and enjoying the pride in seeing a completed project.

But this message was much more effective coming from me…so I would be really interested in reading a similar-themed book but by Nick’s wife, rather than Nick. It would be a better sell to know from her perspective what she felt truly worked and which tactics she appreciated.

Overall, this book is a really quick read, if you don’t stumble over the typos too much. And I’m sure many boater guys and their wives (or partners) would benefit from some of what Nick learned the hard way.

Here is what John thought.