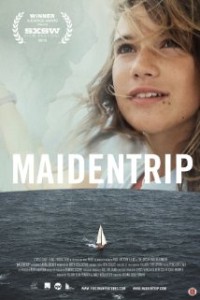 Netflix suggestions are working out pretty well for us. We just watched another sailing themed documentary called  Maidentrip. It’s about a 14 year old Dutch girl that sailed solo around the world over almost 2 years.

She made the trip in a 38′ Jenneau ketch rigged boat named Guppy. During the trip she mentions other young girls that have circumnavigated like Jessica Watson from Australia, and Abby Sunderland in Wild Eyes, but didn’t want to travel like they did, non-stop, since she actually wanted to see the world along the way during the trip.

The movie is well made, with most of the footage coming from Laura herself. It is in both English and Dutch (with subtitles). We would have preferred a bit more information on how she got the boat ready for the trip, and the problem she encountered along the way, but that probably would not keep the attention of the wider audience they are going for with the documentary.

It got great reviews on Amazon, and above average on IMDB.