John & I just got back from a sailing week in Malta where we qualified to be “Day Skippers” of a sailboat – complete with official ID cards. We lived aboard this 36′ Dufour sailboat for 6 days and sailed with an instructor, and another lady and guy (not a couple) who are also pretty much beginners like us. She’s an Australian Vet who lived for 20 years in UK, now moved to Malta with her retired husband who wants to become a pilot (and of course we teased her about who was going to win the argument of whether to buy a boat or a plane). The other chap was a retired human resources director from UK, most recently lived in Oman before moving to Malta 2 months ago, and has a house in Spain. Interesting folks. 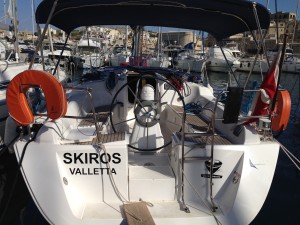 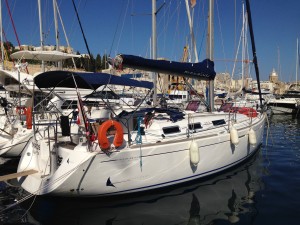 “Day skipper” means that we know enough to take the sail boat out of the harbour without damaging anything and then sail along the coast, navigating and avoiding others as necessary. We even sailed one evening and it was quite spectacular to see all the lights & feel the wind at sea at night. John was in his element – absolutely loved being on the water and picked up all the techniques very quickly, since much of the wind/sails/navigation translated easily from his helicopter world.

We thoroughly enjoyed the course – both the adventure of being on the water together and the experience we gained from learning in action. Our very knowledgeable and extremely patient instructor explained an aspect of handling the boat, then placed us in a role as either crew or skipper and the rest was up to us to make it happen. Each of us took turns being skipper and learned to control the boat both under sail and under motor, in tight spaces and in open seas. By Day 3, the instructor appointed the skipper and left it up to her/him to task the crew members. By Day 4, we were encouraged to do what we wanted when at the helm, and to talk through what we were thinking so the other students could learn from our mistakes as well as their own.

Fortunately for us, strong winds provided some interesting sailing situations and a variety of “teachable moments”. Throughout the week, safety was emphasized over and over. We ran through man overboard drills, discussed life rafts, flares, life jackets, helicopter rescues and fire.  John will post more of the detailed information about what we accomplished later.

Malta has fabulous weather – the sun shines there consistently & warm winters gives it one of the best climates in the world. We didn’t tour the island too much since we were on the boat every day and zonked in the evening, but hope to return in August to check out some more sights. It’s pretty small and wouldn’t take long to explore. The culture & language is a mix of British, Italian & Arabic – which is interesting. I could understand a few words they said but most everyone speaks English as well. There is tons of history there and many old forts and fortified structures due to its historically strategic position in the middle of the Med.  There are many online sites dedicated to Malta. It is a very interesting country that many of us know nothing about. I encourage you to Google it to learn about its interesting history as we did.