On New Year’s eve we anchored in the Hawksbill Cay Northern Anchorage en route to Georgetown and had a lovely potluck with our boating buddies. Even though it was New Year’s, we all decided to call it an early evening in anticipation of our 7am start the next morning. 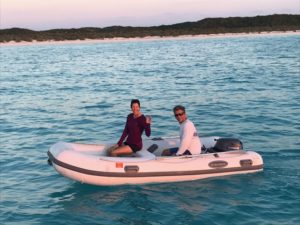 We kind of expected to get woke up with fireworks from some of the mega yachts anchored in the vicinity near popular Staniel Cay. It was still dark when we woke at 5:30 so we captured a nice picture of the moon setting into the horizon. The little iPhone lens doesn’t do it justice. Makes waking up at 5:30 worth it! 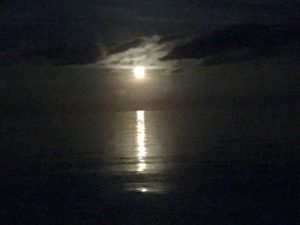 Most of the journey down to Big Farmers Cay was uneventful motor sailing most of the way with no wind and during the last two or three hours flat calm glassy water. It was quite surreal, and I think all three boats in our group commented on the radio about how incredibly calm and clear the water was. As the depth varied between 2 to 20 feet below our keel, we relied on the boat’s depth gauge since you could clearly see bottom at all depths. 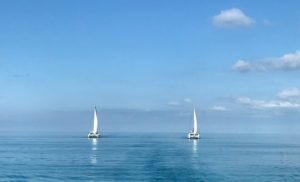 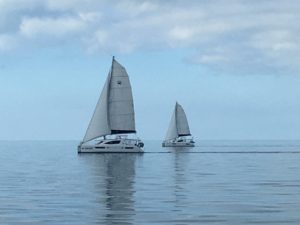 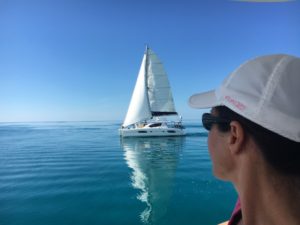 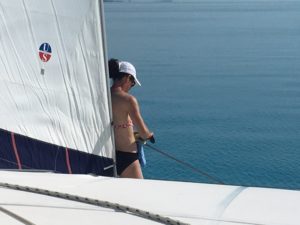 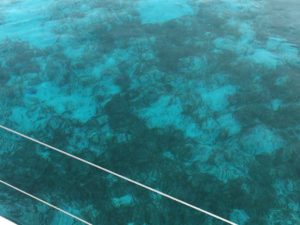 During one portion, John said that the gauge read 0.2 feet below our keel – yikes! It was good that I was down below at that time and not paying attention to the depth because I was already stressed about sailing in only 4 feet of water.

That morning leaving Hawksbill, the clouds gave way to a sunny day by the time we arrived in Farmer’s Cay. With no wind and the sun out in force, it was getting very hot and time for a swim. Since the anchorage was fairly crowded, we were a distance from the rocky shoreline where all the fish would be hanging out so we just snorkeled and swam around our boat. One of our traveling companions went searching for lobster and found 4 in no time!

We were the only three catamarans in the anchorage while there were six monohulls already there when we arrived. Shortly after we dropped anchor one of the monohulls left which was in a very good spot close to the beach. I guess it didn’t like the new neighbors. It would have been a great place to anchor but we were already  set for the night so we decided not to move. One more monohull showed up shortly after and anchored off our stern. In total, four boats were from Canada, all speaking French, very loudly, so we joked with our American friends about Canada taking over the area and trying to intimidate the US vessels. 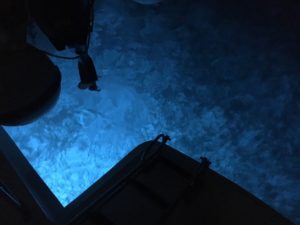 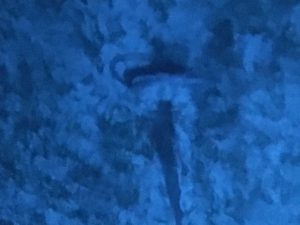 It was a calm night at anchor, and we got another great look at the moon. The water was so clear, our little LED hull lights caused us to notice we had drifted directly over the anchor which was about 12 feet down. 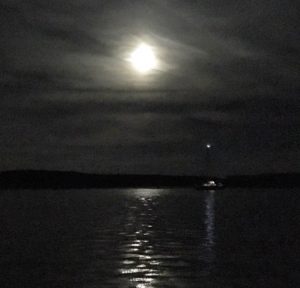 We woke again the next morning at 5:30, ready for the journey to Georgetown area. We were headed to find shelter from the oncoming storm which was then impacting the north of the islands where we had just left a couple days prior. Weather is everything when living on a boat!