By March 9th we had started to grow restless in our anchorage at Rock Sound, Eleuthera. I was probably feeling it more than Christa, as we had been trying to get to Cat Island for the last month.  While there are many good reasons to visit Cat Island (read any reviews online), the main reason we were trying to get there was because my father had bought a plot of land there in the early 60s but had never visited the Island, and so we had an opportunity to have someone from the family set foot there for the first time.

The land was located in a development called Greenwood Estates that started with significant investment and unfortunately, like many still viable projects in the Bahamas, never really went anywhere. Similar developments were on almost every island we visited. Paved roads to nowhere, with utility poles and sewer systems in place, in various degrees of decline. A Google search of “Greenwood Estates” will find lots of properties listed for sale, some in the millions, and some for as little as $5,000…which is probably what ours is worth since it’s in undeveloped brush on the high ground, well away from the water.

We also planned to head to Cat Island during our last visit to Elizabeth Harbour, just prior to fouling the prop. It was only about 45 miles away, but we never got sea conditions that were calm enough so we started heading north to approach from Eleuthera. Almost a month later, and after visiting a lot of the Exumas, we were finally going to get there. 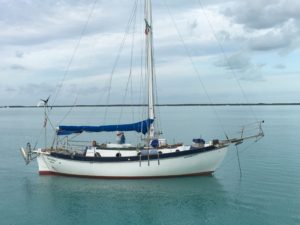 We got a mid-morning start, since we decided to break up the trip into 2 legs; stopping at Half Moon Bay on Little San Salvador with a few other boats we had met while in Rock Sound. In this picture on our way out of the anchorage, we passed an old Westsail 32 in very good condition, owned by a couple from way up in Vinalhaven Maine, near where we grew up. 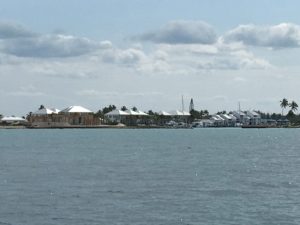 About 13 miles away from the Rock Sound anchorage, we passed Cape Eleuthera Resort and Marina as we turned south. Little did we realize at the time, how we would come to know this location in intimate detail very soon. 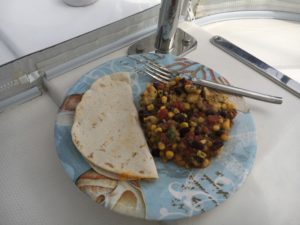 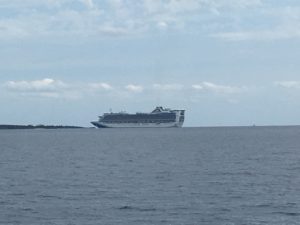 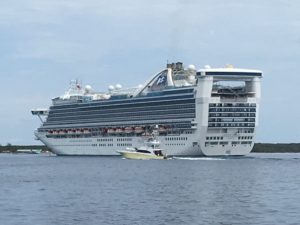 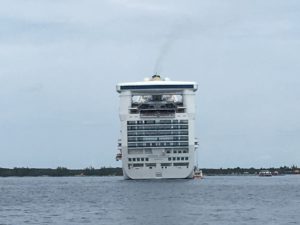 While we enjoyed a great “what we have on board” concoction that Christa whipped up for lunch, we crept closer and closer to a huge cruise ship that was anchored off the south-east shore of Eleuthera. It was the Caribbean Princess, from Princess Cruises. According to AIS, it measured 952 feet long. We had been dragging one of our fishing lines on the way south, but didn’t even get a nibble. I blamed the sport fisher in the left picture that was buzzing around us the whole time. 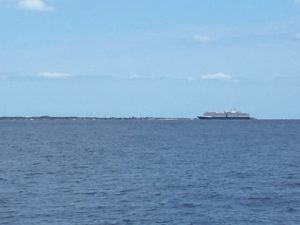 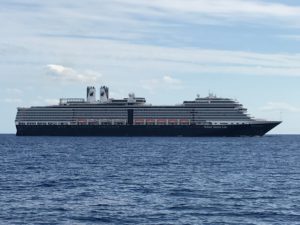 As we started to head east off the south tip of Eleuthera, we could almost immediately start to see another cruise ship on the horizon, and then soon after Half Moon Bay, the tiny island where it was anchored. The bay is an interesting place privately owned and developed by Holland America Lines to take their passengers ashore for various activities. This arrangement has also made it quite controversial, since the Bahamian government sold the island outright, instead of leasing it or jointly developing it with the cruise line for more domestic benefit. This is a familiar tale we have encountered at other places during our short stay in the islands. In any case, the cruise line does not mind cruisers anchoring in the north-west corner of the bay when passengers are ashore, and then once they head back to the cruise ship for the night, we are free to wander the property ourselves. 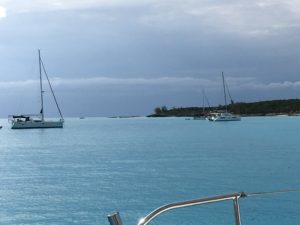 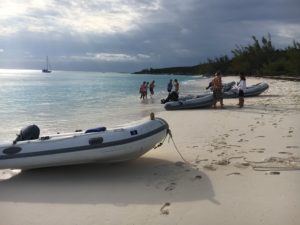 As soon as we entered the bay, the big cruise ship started to leave, so we could safely head to shore without upsetting the owners or tourists who had all left for the day. The 3 boats we were supposed to meet up with, were already there and soon 3 more entered the bay and anchored close by. We all headed to the beach with an adequate number of beverages to chat and explore the area. 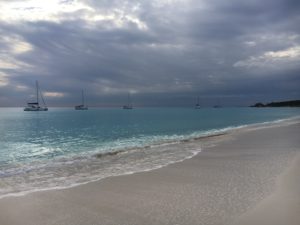 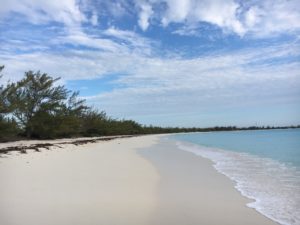 Like most of the Bahamas, there was an endless white/pink sandy beach with crystal clear water. Coming into the bay, we started to see bottom with 54 feet showing on our depth gauge. Spectacular! 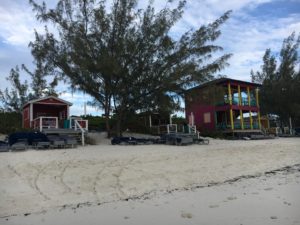 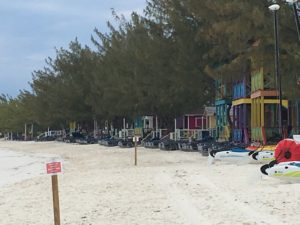 About a 1/2 mile from where we beached the dinghy, the cruise line’s infrastructure started along the shore. Several cottage/shelters lined the shore that cruise ship guests could rent for the day with various services and luxuries, such as meals, drinks, spa treatments, massages, etc. 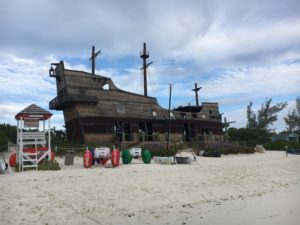 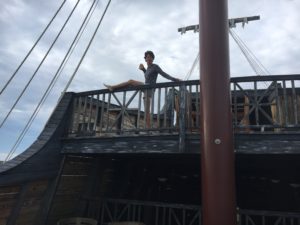 Christa needed a bathroom break, so she went looking for one in this pirate ship mock up. We assumed she found what she needed once she started acting like a drunken sailor on the top deck…until she realized I was filming as least. 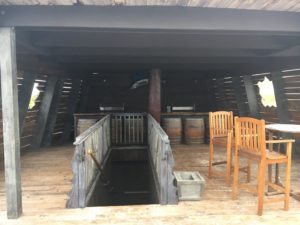 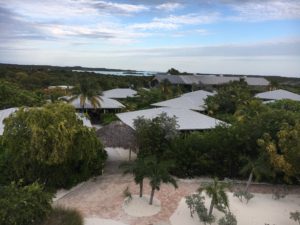 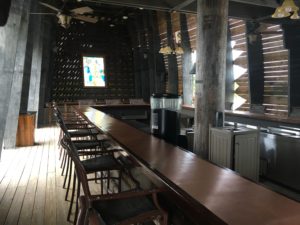 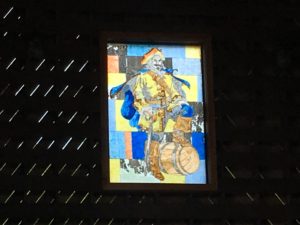 It was quite a substantial structure, with a good view of the whole area, and seemed to be sponsored by a particular beverage company. Shortly after our exploring was interrupted by a brief shower so everyone quickly returned to their boats to enjoy a spectacular sunset. 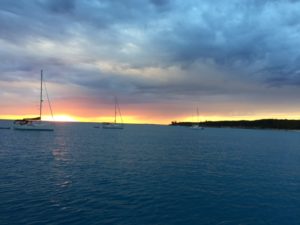 In the morning at approx 0700 as we all got ready to keep heading east 25 miles to Cat Island, a new cruise ship arrived and dropped anchor in the bay. Unfortunately for us, we couldn’t get the starboard engine started prior to lifting anchor. 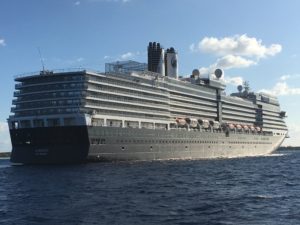 Just like most have experienced on a car, the starter would “click” or occasionally turn the engine over momentarily, but it would not fire. Since we’re on a catamaran with another engine (thankfully), we told our buddy boat that we would still head towards Cat Island and sort out the engine along the way. No sooner had we made this decision (and taken this picture above) that we turned the corner out of the bay towards the east and into 15-20kt winds directly on our nose and 4-6′ waves. The forecast had called for winds more from the NE and <3′ waves. Not playing fair!

As planned, I rounded up a few tools and headed down into the engine compartment to try and find the problem with the starboard engine, while the port engine struggled against the growing wind and big waves. After 2 different sessions down in the engine compartment, totaling maybe 45 minutes, I had managed to clean every ground connection I could find, verified the voltage everywhere and ensured the wires leading to the solenoid were clean, but still no success. By this time I had had enough of the wavy conditions while down there so I stayed at the helm and even took a Dramamine pill as the waves continued to get worse.

After 2 hours of barely making 2.5kts towards Cat Island, and after burying both bows of the boat for the first time (twice), we decided that it was better to turn around and sort out the engine all the way back in Rock Sound or Cape Eleuthera Marina, a full day away. The good news was that we would be going downwind, and then have a long beam reach all of the way back to Cape Eleuthera. The final 13 miles into Rock Sound though could be tough depending on the winds, due to the channels we would be forced to take with their associated currents from the outgoing tide, and the wind that would again, be right on the nose as we tried to make it there before sunset.

Initially we were making very good time, managing 8-9kts for small stretches as we headed north towards Cape Eleuthera. If not for the bum engine and us heading the wrong way, it would have been a great day sailing. Our plan was to try and get into the marina as we didn’t know for sure what was wrong with the engine, and we wanted to be securely tied up in case we were disabled and bad weather was approaching. Unfortunately, the dock master told us he had no place on the wall for us to tie up (which would have been an easy straight-in shot), with only a couple slips that we could try and nose in to. These slips were beam to the wind at the far end of the marina, so I slowed down and did a little “test fly” of the boat to see how it handled with only one engine with the strong winds. I decided there was no way to control it abeam a 15-20kt wind and didn’t want to start bouncing off everything in the marina as I needed substantial forward motion for any steering ability at all. Looking back, I could have asked it there was anyone that could tow us into place. We never thought of this at the time, and likely would not have chosen to pay for a tow, when we had a large protected bay, next to a town, airport and many other cruisers just up around the corner in Rock Sound.

Heading to Rock Sound from Cape Eleuthera, there are really two routes to get you there. One is through the Davis Channel, and the other through the Poison Channel. On each side of these the water gets to less than a metre, so no cutting the corners to shorten the trip nor for better position in the winds. Of course, as it always is with sailing, by the time we got there, the winds were running right down the centre of both channels on our nose. We had been through the Davis channel before, so we went that way. We were against the current, into wind, quartering waves on the nose, with one engine and could not use our sails. We managed 3.5-4kts for the better parts of 3 hours until getting close enough to the east shore of Rock Sound Harbour to make our way close to our previous anchorage spot barely 24 hours before. After a long, stressful day we were very happy to seem familiar terrain.

We dropped anchor with just enough light for me to get back in the engine compartment again, albeit with a headlamp. I redid everything I had done while underway, but this time not having to stop myself from throwing up all over the place so I was better focused on what I was doing. I had narrowed it down to what I thought was either a bad solenoid, or low amps in the battery. I fashioned a wire harness that I would use to jump the solenoid connections from up on deck, as there isn’t enough room to have the engine turn over or running while you are down there. If that didn’t work we would swap the battery with the other engine, as it’s sometimes possible for a battery to show good voltage, but not have enough amperage to crank the engine. 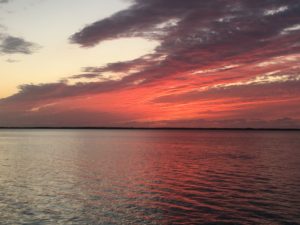 It had been a long and stressful enough day by then, so Christa rightly told me to leave it until the next morning and we enjoyed “a few beer” while watching the sunset and calmed our frayed nerves; happy that we made it back to a place we knew well so we could be safe and secure while we continued to trouble shoot in the morning.

Or so we thought…