With the coming day, I was willing myself to feel better. There was very little wind and we were motoring most of the way. John came up on deck as it was shift change again at 7 am and I was still awake (somehow). After a hot cup of tea I felt well enough to go below to change my clothes and freshen-up. What a first night it had been!

Later that morning we were thrilled to see a pod of dolphins swimming along our bow for about 5 minutes. It certainly brightened my spirits and reminded me of why I had wanted to embark on this journey. In the early afternoon we spotted a green turtle about a foot in diameter, just big enough to follow for a few moments. I suggested going for a swim to perhaps perk us up after a long first night. 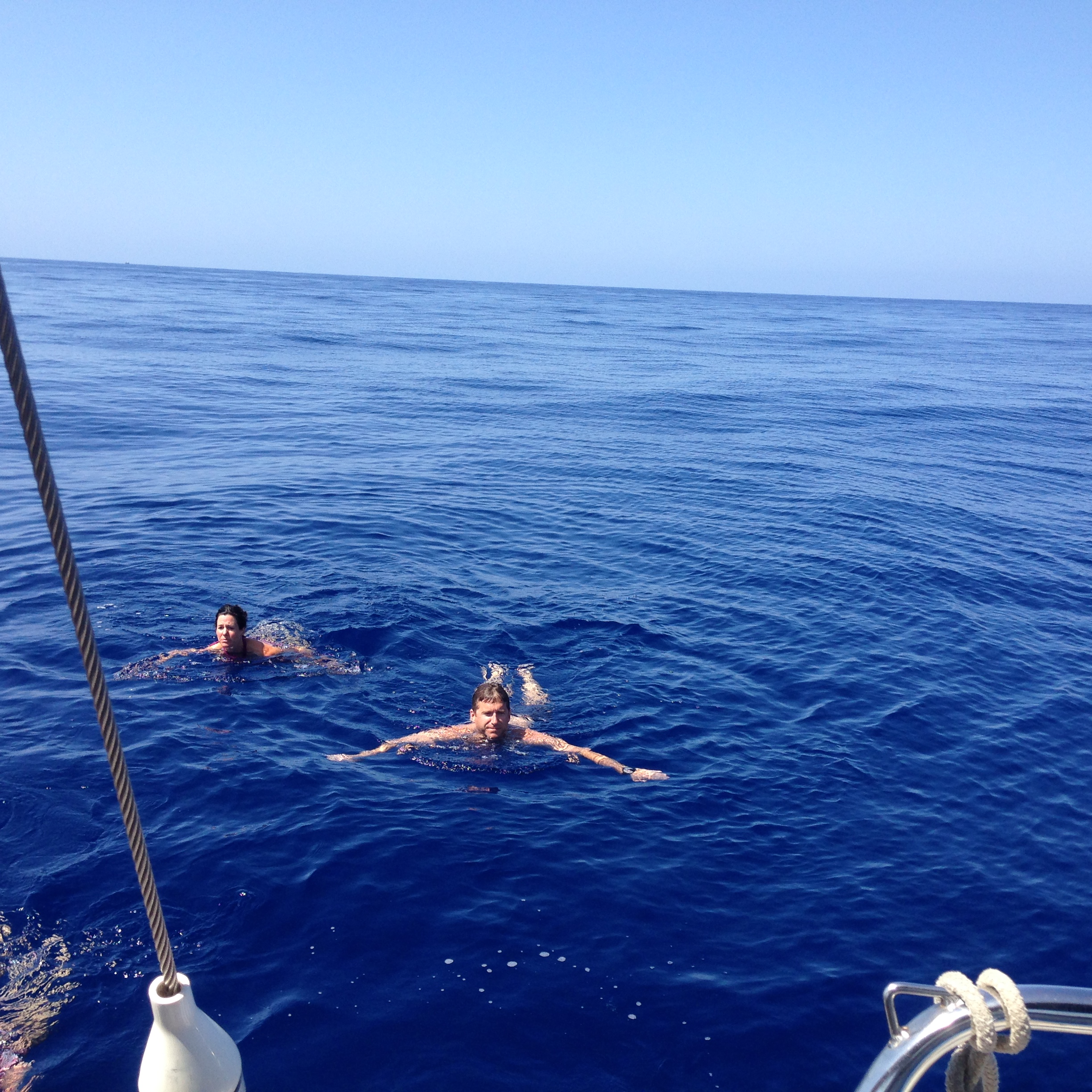 The water was absolutely spectacular – a brilliant blue colour and surprisingly warm, probably about 24C. John, Jeremy, Sylvie & I swam for about 10 minutes off the back of the boat. I was last to leave the water & realized the boat was starting to pull further away, as it had shifted around. Stephen tossed me a rope and just as the end hit the water near me, I felt a tremendous sharp pain on my back towards the left side, like I had just been bit by something. I screeched that something had just bit me!

Everyone on the back of the boat looked intently towards the water and said they couldn’t see anything near me so it was likely just the end of the rope that had hit me. I swore that something had “bit” me, then started swimming harder towards the boat, and by now was wondering what on earth could have caused that intense pain on my back. I was starting to be a bit scared of what else might be in the water. John realized that something really was up, and jumped in and quickly swam over to meet me. He grabbed the rope, I grabbed his leg and we soon made it back to the boat. 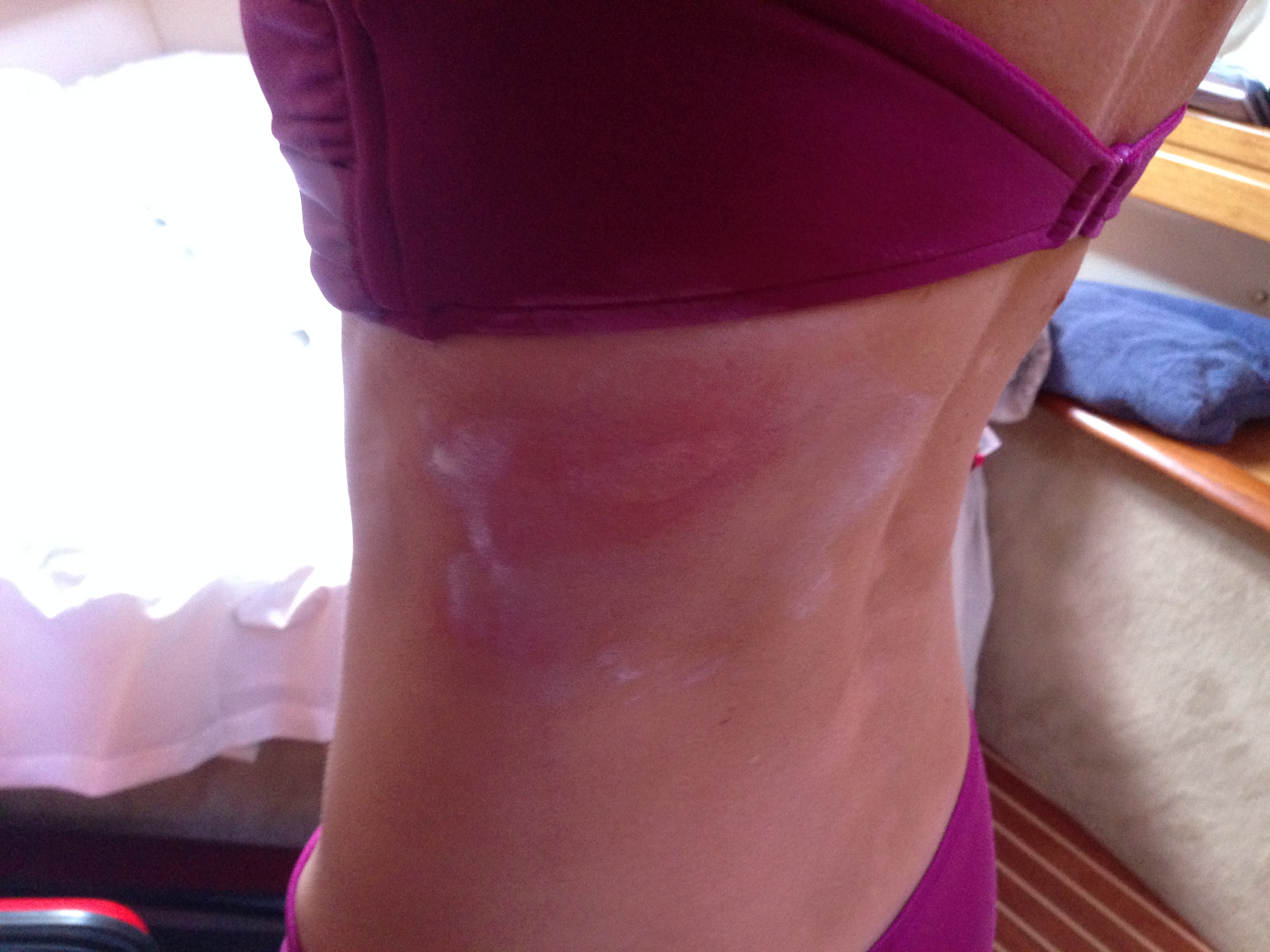 As soon as I climbed up onto the transom the looks on everyone’s face as they saw the big welt on my back, told me that I had definitely encountered something. They assured me it was simply a jellyfish sting…ah, thank goodness! I had never been stung by one before but knew it wasn’t a big deal, even though it really smarted. Anna got some lotion and rubbed it on the welt – aoouuch! The aloe vera gel worked wonders to take away the sharp pain.

During the afternoon, Sylvie and Anna planned our approach into Porto di Lampedusa, Italy, where we would spend the night in the small marina. Sylvie was skipper for this leg and I was truly impressed by the scale & accuracy of the marina sketch she drew and her meticulous planning of the approach. With Jeremy at the helm, she directed him to steer us into the harbour. We avoided a few fishing trawlers, although a bit too close for my liking, and made it safely onto our pontoon. 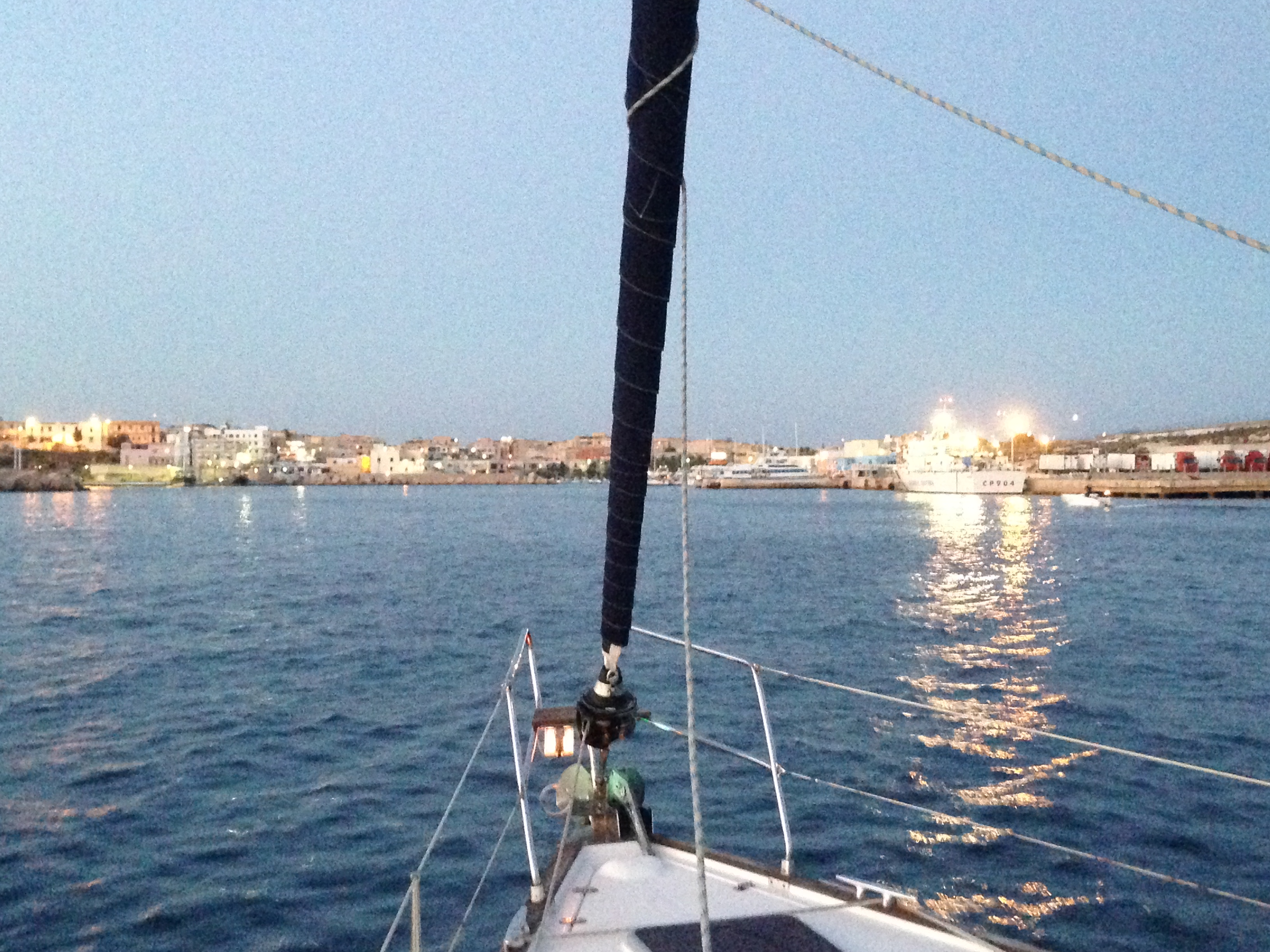 I also learned that there is such as thing as being overly-meticulous with planning, as we headed closer and closer towards the lee shore until just the exact waypoint position was reached, even though the marina pontoons were clearly visible in the early evening light.

Once secured to the pontoon, we had a tasty feast of salmon, green beans & couscous, which was the first real food for me since my seasickness had started. Then Jeremy, Sylvie, John & I headed for a short stroll into town to find a glass of wine & a beer. After we stopped at 3 or 4 restaurants, which refused to serve us drinks without food (and we were still stuffed from our tasty meal), we finally stumbled across an actual bar and happily enjoyed a couple drinks. The 10 min walk back to the boat was all I could manage after a couple days with no sleep, intense seasickness, and nasty jellyfish encounter. Our berth felt so great as I crawled in and my head hit the pillow as I fell asleep.