So…why did lightning hit our boat, and not others close by? We have no idea, nor does anyone else, regardless of the various theories out there whether credible or not. No one really knows how lightning will act and each strike is different. You can spend days reading – and I have both before and after the strike – about how lightning is supposed to behave, what to do to prevent a strike, and what to do after. Even if you survive a strike with little or no damage, or don’t get hit at all, that does not confirm that what you did to prepare had any impact on the situation. Think of it this way through a silly analogy – “I’m wearing alligator repellent, there are no alligators around, so it must be working, right?”

The easiest myth to dispel is that lightning will hit the highest point in the vicinity. We are proof that this is bogus. We were anchored right next to a Lagoon 450 with a 78′ mast, and close to two other boats with masts taller than our little 63′ mast height.

How about this video that had been making the rounds showing an anchorage full of sailboats, and the lightning hits the water right next to a very tall mast. How does this happen? We don’t know, and nor does anyone else, although there are plenty of theories. In the end, it really doesn’t matter.

We were hit by lightning. The boat wasn’t sinking nor on fire. We both were fine.

I was angry. Christa was sad.

Are we lucky? Blessed?

I don’t think in those terms, but instead subscribe to the theory that you prepare (or not) for a situation that presents itself, which allows for a favorable outcome to occur. This is what some people like to refer to as luck.

Maybe…ish. Heavy on the ish.

I am a retired RCAF helicopter pilot, so I am used to contemplating and preparing for incidents for which in that world tend to be called “emergencies.” The principles to follow on a boat are similar, so we have created checklists, gone over and practiced a few scenarios, including…preparing for and getting hit by lightning. This is why Christa thought of putting things in the microwave when she first heard thunder rumbling in the distance.

We did not, however, run through such a strike enough to have responded by reflex or rote. We instead sort of did a combination of my pilot training, and stumbled through the remainder based on what made sense. The process kind of ended up as PEOPLE – WATER – FIRE – STABILIZE – COMMUNICATE

Soon after it happened, we both checked we were OK (PEOPLE) – we made sure there was no water coming in and we weren’t sinking (WATER) – we did our best to verify there was no fire and/or the fire was out (FIRE) –  then we stabilized the situation including going over ourselves again (STABILIZE). We were at anchor in a well populated area so that was a benefit, however if we were underway at sea, stabilizing things would have been much more involved. We then sent out messages to those close by and our insurance company (COMMUNICATE).

As an aside, cruising in the The Bahamas has a plus in this case, or perhaps you could call it a morbidly humorous benefit. Usually anchorages are very shallow, so if our boat was actually holed from the lightning strike and sank (which thankfully it wasn’t), it’s only about 3′ to the bottom. Our boat would just sit on the sandy bottom with the water line at the hull windows and it might not even be evident that we had “sunk”, until someone noticed the unusually high water level on the hulls.

In the afternoon, someone from the insurance company called us back and the claims process started. We’ll call this the beginning of a different kind of adventure, which we’ll write about at a later time. As we flew back to the states to wait for our boat a few days later, the Rock Sound anchorage appeared in our window and seemed quite peaceful on this calm day… a stark contrast our recent experience. 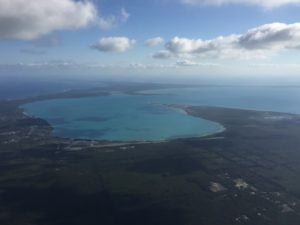 So this was a “thunderous conclusion to our inaugural sail” (boo), or “our winter cruise ends with a bang.” We settled on the latter to serve as our clever title.

Our Winter Cruise Ends...With A Bang
We got hit by lightning - Now what?