Well, the venerable Honda 10hp that we got with the little aluminum boat lasted a grand total of 2 short trips before things started going wrong. But in fairness the motor was born in the early 70s, so like the rest of us at middle age…things are starting to malfunction. 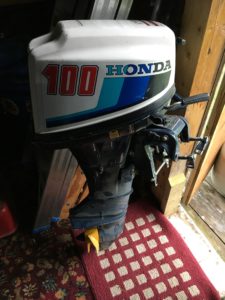 It had seemed to be running OK, albeit a bit rough compared to what we were used to with our Yamaha 20hp on the dinghy. I simply chocked it up to more than 40 years of NVH technology advances. Even if that was the case, we got a nasty surprise just prior to our third trip. I had not checked the oil level since the engine was serviced before we got the boat, and it now looked like cappuccino was poured into the crankcase. Ruh-roh. Water…and a lot of it…got into the oil somehow.

As we had just got it serviced, I called the mechanic to ask him what he did during the “service” due to the problem we now seem to have. He explained that there are a number of locations on the motor where water could be getting into the oil. It could be a simple fix, or not. Either way, he’ll need to see it. Awesome.

So we had Christa’s family’s motor for about a week, and it may have suffered a catastrophic failure within one of the cooling passages. Always a great way to endear yourself to the “outlaws”. I was hoping for a simple gasket, but my spidey-senses were tingling. 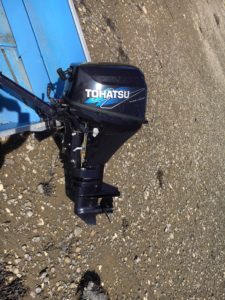 In the interim, I managed to find a barely used 2015 Tohatsu 9.8 not too far away. Anyone in S. Florida or the Caribbean will be very familiar with Tohatsu outboards as they are quite common. Up here though, it is very rare you see one, and most people who have seen it on our boat had not heard of the brand.

While looking online for general information on the motor, I learned they also make a 9.9hp. Huh?

It turns out that this manufacturer, like others, use the same engine block and basic motor for more that one horsepower range. For example, friends that we cruised with in The Bahamas had a similar dinghy, with a Yamaha 15hp, compared to our Yamaha 20hp, which is the exact same engine in every respect less the fuel delivery. Exact same weight, but we had 33% more horsepower. We occasionally pointed that out.

What Tohatsu does is use the same engine for both the 8 and 9.8hp models, AND The 9.9 is the same basic motor as the 15hp model. So that gives you a 9.8hp motor that weighs 80lbs, and a 9.9hp that weighs 95lbs. I’m sure someone out there knows why you would want essentially the same horsepower with 15 pound more weight. Lower stressed engine? A bit quieter? A bit of a head scratcher.

I also learned that any outboard in North America with a Nissan engine cover is actually a Tohatsu. All Mercury outboards 25hp and less are also Tohatsus. Interesting. Better not tell hardcore Buy America/MAGA-types about this; there may be some hell to pay 😛 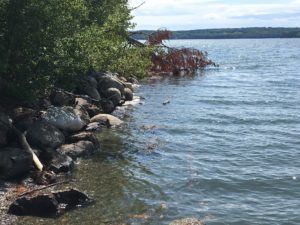 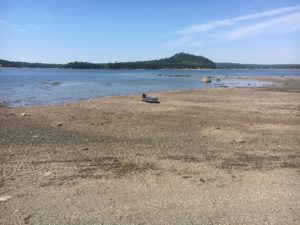 Our cottage is on Oak Bay where twice-a-day tides change the water level by up to 30′. So the next chore was to figure out a way to be able to anchor the boat out away from the rocky bank to avoid damage by the waves, yet still have easy access when the tide was in, and not have to swim to the boat. We could dinghy to the boat, but taking a dinghy to something the size of a dinghy is just wrong.

Of course there is a cruiser’s trick for this problem. It’s sometimes called a “clothesline mooring”, “pulley anchor” or “outhaul mooring” for a lot of people. Do a Google search for these terms and you’ll find many articles and videos for different variants. Here’s a Sail Magazine Article with a couple variants.

We used a modification of the second picture from the article, but instead of a temporary anchor on each end, we attached the shore side to our retaining wall, and used 2 X small Helix Moorings below the waterline. Since this was going to be a semi-permanent setup, we wanted the security of a helix mooring and set them approx 10′ apart to form a very long isosceles triangle to prevent the long lines from wrapping around themselves from the tide and waves. The long sides are approx 150′.

This is what the ends look like on the Helix mooring. Ours have a 48″ shaft, so they’re not going anywhere until we remove them. 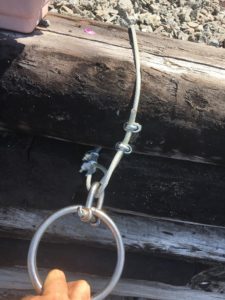 The boat only weighs about 300lbs, so it is safe to attach the shore side to our retaining wall. I used 40″ of 3/8 steel cable and a 5″ stainless ring with a D-shackle we had on Low Flite. 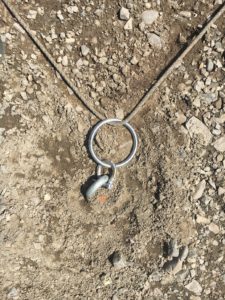 This is what boat helix moorings look like in the beach. The reason we used 5″ rings as opposed to pulleys is due to the large amount of seaweed that floats freely in the bay. It can pull right through a ring, but likely would freeze up a pulley. Plus, with the minimal resistance of a 300lb boat, it was also much cheaper than trying to source stainless pulleys up here. 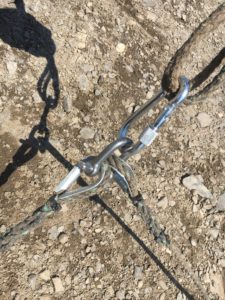 I used galvanized thimbles from a local chandlery on both ends of the main line, connected with a D-shackle. This is where I attach the boat’s painter with an asymmetric carabiner. 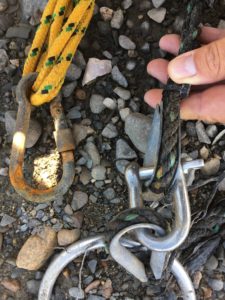 A note about that carabiner, and the rest of the fittings for that matter. Make sure you don’t skimp on the quality. This picture shows what they look like after one month of use. The rings are “only” 304 stainless, and still look as they did when new. 304 is the lower quality of the two most common grades of stainless steel i.e. 304 and 316 stainless. The thimbles are galvanized, and still look new, and the D-shackle is 316 stainless from Wichard (I think), and is like new. The carabiner is from a retailer on Amazon and advertised as stainless, but most definitely is not as you can see by the amount of rust accumulated in only one month. 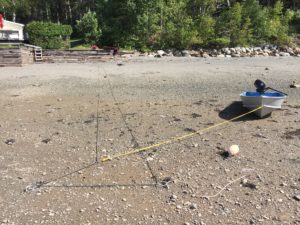 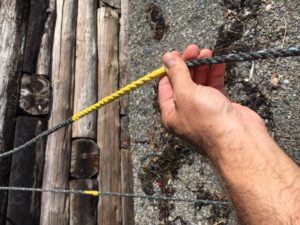 The main line is poly so it floats, but since it is run through the rings at the deep end, only about 1/3 of the line is visible on the surface at high tide. We marked it with some yellow vinyl tape approx. every metre to make it more visible in the water and on the beach. We placed a wider strip of tape marking when the D-shackle attachment point reaches the first ring, telling us the boat is as far out as it can get. 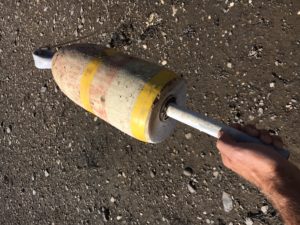 We also attached a small buoy to one of the helix moorings to mark where the end of the line is at high tide. We actually found this buoy on Long Island, BS in late January. 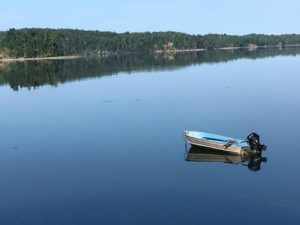 The mighty Espadon at high tide in all her glory, now resting nicely on our clothesline-outhaul-mooring-pulley-anchor-thingy.

So is all this effort worth it? It wasn’t really a lot of effort, and we certainly have enjoyed easier access to the water to explore the far corners of our bay this summer. We’ve even rescued a family stranded in their boat with an approaching storm…and then got caught in the resulting down poor.

I’m sure I needed a shower anyways.