During our breakfast at Fort Burt, we met an interesting guy and gal who just so happened to be from Canada and were in BVI as crew on one of the most interesting sailing ships I’ve ever seen. It’s called the Maltese Falcon. 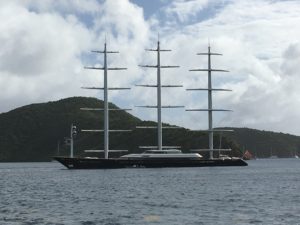 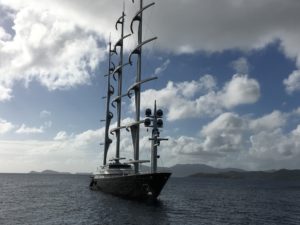 After arriving at Road Reef Marina about 0900 and meeting the friendly TMM staff, we quickly got down to business. Peggy & I headed off to Riteway to purchase groceries, while John & Jeff had a very thorough introduction to the boat and its systems.

Once back from Riteway, the provisions were stowed, deliveries were verified, and it was time to cast off with our check out skipper, Jerome – a colourful character whose job was to ensure John as captain and Jeff as first mate could safely handle a Lagoon 450 for 10 days. The first task was to manoeuvre out the narrow channel to the harbour with John at the helm, receiving lots guidance and reassurance from Jerome.

Our first stop was in the harbour to practice picking up a mooring line. Although we had done this last year on our charter with a Lagoon 440, Jerome demonstrated a different method we hadn’t seen before: securing the line to one cleat, allowing the boat to swing in the wind to an appropriate angle to then feed the second line and secure it to the other cleat. Then adjusting the two bridle lines to centre the mooring ball, always maintaining one secure line. Although it required a bit of back and forth line adjustments, this method allows you to approach the ball keeping it clearly in sight from the helm (so you’re not approaching blind) and then if necessary, to secure to a mooring ball single handed. We practiced this method throughout our charter and found it worked very well, especially in a windy, crowded anchorage where we wanted to ensure we were secured quickly. 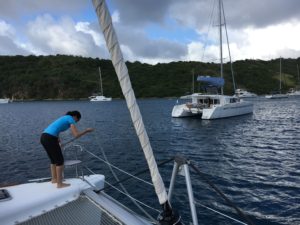 After the lesson on mooring, we then moved to the side of the harbour to practice anchoring, again with a couple tips from Jerome on placing the snubber/bridle to ensure it holds. Next we headed off to the Drake Channel to actually do some sailing. With 25 kt winds, it was a lively sail down to the channel to Nanny Cay. Satisfied that we would be a competent crew, the sails were lowered and Jerome guided us into the marina at Nanny Cay and explained how he was going to hop ashore as Jeff held the engines steady next to the dock – yikes! It all worked out brilliant so at 1430 we were off on our own towards The Bight at Norman Island for our first night.

As soon as we left Nanny Cay, the sails were hoisted again, this time with a reef in the main since it was still blowing strong at 25 kts. We were thrilled to be underway with our own crew – big smiles all around! We easily secured our mooring at The Bight, and of course selected a spot not too close to the rambunctious Willy T’s. We certainly visited for a drink but didn’t want to listen to their revelry late into the night. 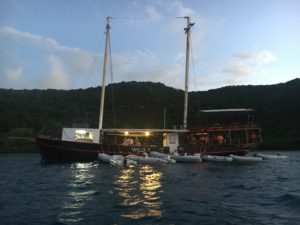 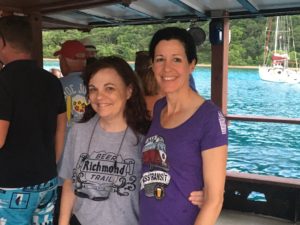 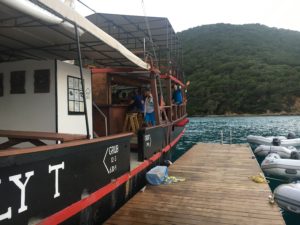 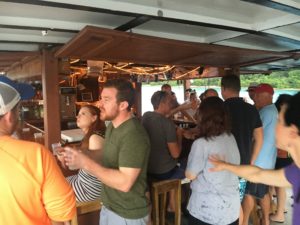 We then headed ashore to sample some fine fare at The Pirate’s Bight. After living in southern Italy for 2 years, John has a thing about never ever eating “polipo” again…but the octopus here was terrific – glad we gave it another try! Arriving back at the boat at 1930, we enjoyed a light meal of tapas and Caprese salad while catching up with our friends.

By 2130 we were all pooped and ready for bed. The wind was howling, even in the sheltered anchorage, and with the occasional squall continued to build throughout the night and into the morning.

The guys took turns to check on our situation, noting 40 kt winds at a couple points in the night. Our catamaran was brilliant at keeping us steady, while some monohulls rocked incessantly. We were happy to have chartered the spacious and solid Lagoon 450.