When we were looking at some options for how to configure our main anchor bridle, we came across an article about how to make something called a swell bridle. (that’s not swell as in “good” but swell as in “wave action”)

It was written by a great photographer-sailor (and veteran) John Peltier: LIVING ABOARD: SLEEP TIGHT WITH A SWELL BRIDLE. It describes how you can easily configure a bridle to turn you boat into the prevailing waves, or swell, when they are not in the same direction as the prevailing wind. This is a very uncomfortable condition, especially for smaller monohulls, and although very easy to rectify, it is rare that you actually see someone do it. In many anchorages we see many boats yawing and flopping all over the place, so not using any kind of bridle at all.

Well, a couple days ago, we actually saw someone do this. We were anchored just off the old Decca Site on Pipe Cay BS, and early in the morning we noticed the boat was somehow beam to the waves. This was unusual as we were on the lee side with winds from the east for the past few days and should be for many more. Finally at around 0600 when it was bright enough I went out to look, and sure enough we were still facing east into the wind, but for some reason there was a 2′ swell from the SSW. A bit of a head-scratcher, but it didn’t really bother us with the size and weight of our boat.

We did note the other 3 monohulls that were anchored with us though. 2 of them were rock side-to-side quite a lot, and then there was this guy on a modest little boat, facing perpendicular to all of us. 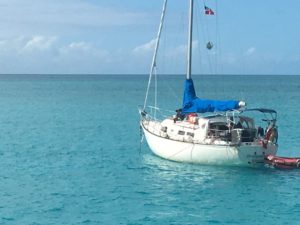 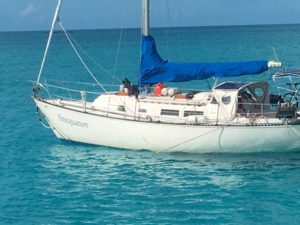 Although you can’t see his position in relation to the rest, you can see the line on his port stern quarter running forward to the main anchor line. This is holding him almost 90 degrees to the other boats, and dead into the prevailing waves. He knows what he’s doing. Happy as a clam.

I took these pictures as we were leaving the anchorage, and I yelled over to him that I was impressed he actually used a swell bridle. He had a knowing smile on his face as he waved with a thumbs up.

We Pull in to Emerald Bay Marina for Fuel...and then things got interesting
Entertaining Dolphins to Little Farmers Cay