After our near disastrous visit to Emerald Cay Marina where I fouled the propeller, we were breathing a huge sigh of relief as we headed north along the Exumas with both engines working well. John & I were enjoying a peaceful morning, looking forward to exploring the waters near Cave Cay where David Copperfield has an expansive property on Musha Cay, complete with a sunken plane. I asked John if he was missing military life when I spotted a dolphin right beside the boat. My high-pitched shriek, “OH!” and a long enough pause before “DOLPHIN!!” to allow John to think we were about to hit something. I tend to lose it when I see dolphins, or a turtle…This was quickly followed by me running to the bow where incredibly, there were 5 more dolphins. What an amazing sight! 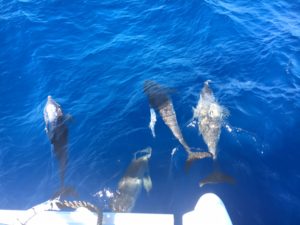 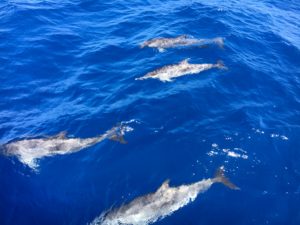 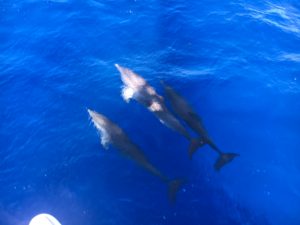 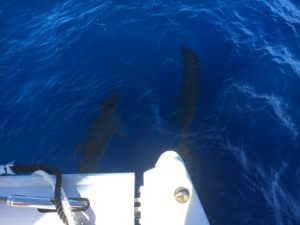 The 6 dolphins swam back and forth between our bows for more than 30 mins. Usually we feel fortunate to catch a glimpse for a minute or 2. These dolphins stayed with us so long we started to recognize individual behaviours as they darted side to side, over and under each other, frolicking in the waves near the bow. We nick-named one the “teenager” since he was slightly smaller than the others and had incredible energy, swerving at sharp angles, breaching over top the others as if to say, “look at me, I’m the coolest guy”. John laid down on the crossbeam between the pontoons and reached down so he could almost pet them as the bow plunged with the waves. All 6 stayed with the front of our bows as they crisscrossed, occasionally even swimming in formation.

At one point, it occurred to me that the dolphins were having just as much fun entertaining us as we were watching them. They didn’t seem to want to leave but finally after 4(ish) nautical miles (about 7.4 km) they darted off to the west. What an amazing treat!

We arrived at Cave Cay and anchored near the marina entrance, then got the dinghy loaded with our snorkel gear for some exploring. The stiff breeze made pretty choppy waves as we crossed the cut towards Musha Cay. Privately owned by David Copperfield, this exclusive property is designed to entertain only the very rich and famous at $39,000 per night. 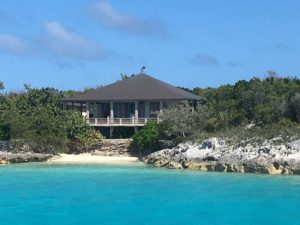 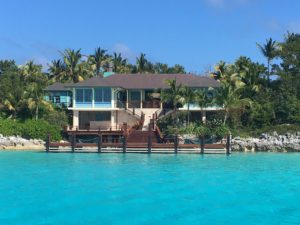 One reason we wanted to visit this area, was for interesting underwater sights – a wrecked plane and an underwater statue of a grand piano alongside a mermaid. Unfortunately when we located the plane wreck off Little Lansing Cay, the strong easterly wind and waves didn’t allow us to anchor the dinghy safely so we continued around to the northwest corner where it was better protected. The reefs along here had some interesting fish and we spotted the invasive lionfish but didn’t have a chance to spear it because someone left his spear in the boat…

Returning to the boat, we saw an approaching storm which was quickly followed by a lovely rainbow. We’re never disappointed to see rain since it gives the boat a much-needed rinse and we catch the rain water from our deckroof in a large tub for cleaning snorkel gear. 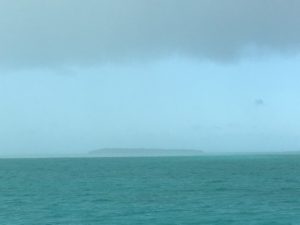 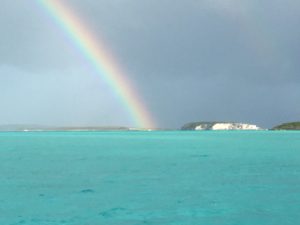 As we continued north along the Exumas the next day, we stopped at Little Farmers Cay and anchored off a  beautiful beach in front of Tys Sunset Grill. 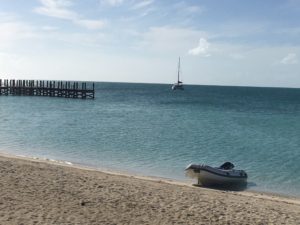 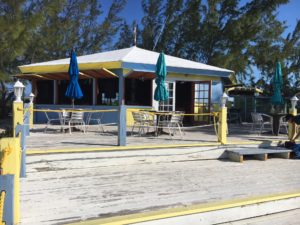 Before heading ashore, we did our regular boat checks after anchoring. We had been experiencing a baffling coolant leak from the port engine for the past month. No coolant was visible in the engine compartment but the reservoir was down about 1/4″ at each check and coolant pooled about 2 teaspoons at a time, under the water heater located under the port berth. Our worry was that the engine was leaking coolant into one (or more)  of the cylinders which would be serious. John had checked all the hoses around the water heater and the rear bulkhead, but hadn’t found where it was leaking. I then checked the hoses coming through the bulkhead again while the engine was running and hot, and finally found what was perhaps the source of the leak around the incoming hose clamp. I tightened it a half turn (which is a lot) and John tightened it further, then cleaned the bilge so we could see if any fresh leaks appeared. This was a couple weeks ago and seems to have solved the issue! And yes, I’m glad to have long skinny arms! 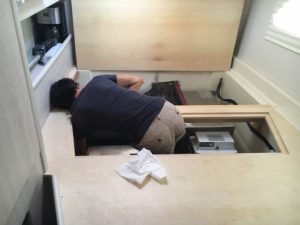 Onshore at Little Farmers Cay, we walked about 10 mins from Ty’s to reach the little village, passing along an airstrip and a food stand, recently fundraising for the local school, offering an interesting assortment of sheep tongue, sheep souse and chicken wings. Souse is a local name for spicy stew-like concoctions usually with chicken or meat, but this was the first time we noticed a sheep variety. 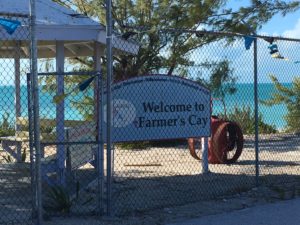 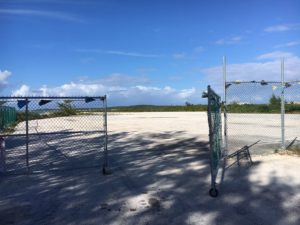 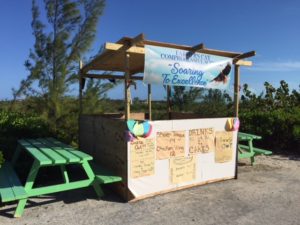 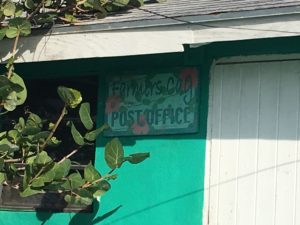 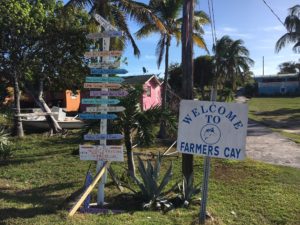 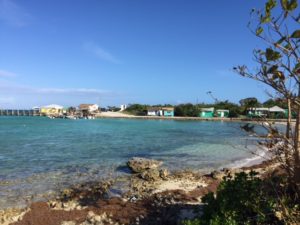 This small village of 77 people is well-know for its Little Harbour, a small cove full of turtles and stingrays which are fed by local fisherman. The community was waiting for the arrival of the mailboat with weekly supplies, which were being offloaded to a smaller boat just outside Little Harbour. We watched the turtles and stingrays, which seemed quite happy for a daily feeding of fish in exchange for a few photo-op poses. 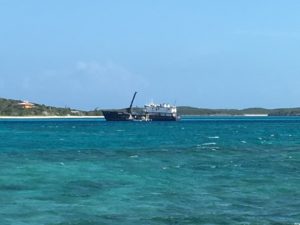 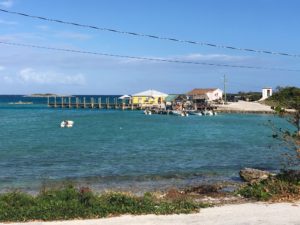 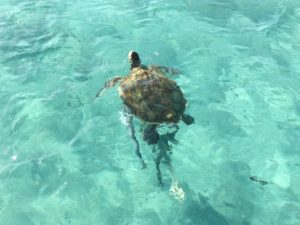 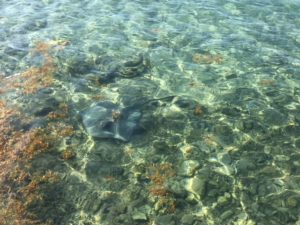 We were a day early for provisions since it would take a few hours to get the mailboat supplies to shore and then delivered to the store shelves. The ladies playing dominoes on the lawn outside Percenties Store said to come back in the morning and their shelves would be full. We checked out the local Farmer Cay Yacht club which had a surprisingly choppy mooring field. 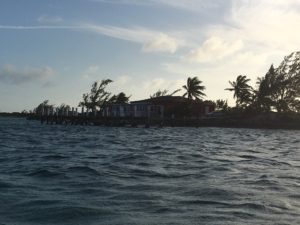 It was soon time to head back to Tys for a sundowner as we enjoyed their free WiFi and a gorgeous sunset. We were anchored close enough that we were able to keep using their WiFi from the boat. John downloaded Blade Runner 2049 , and 5 recent episiodes of Shaun & Julia Sailing. 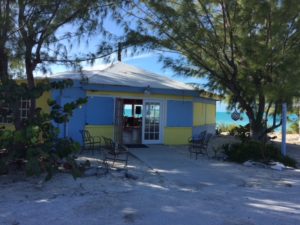 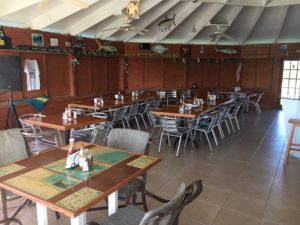 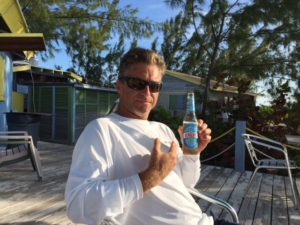 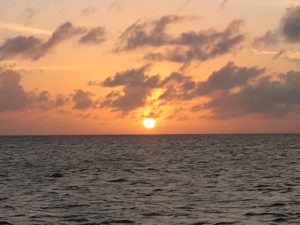