With strong winds forecast to increase, we had a quick breakfast at our Anegada mooring then set sail for Leverick Bay while the going was still manageable. Jeff & I watched intently for coral from the bow as John maneuvered us out the narrow channel. Away from the protection of Anegada, winds were 25kt with 6-8′ waves so it was a bit sporty. The guys decided to go with the jib at 2nd dot which had us doing about 6kt. 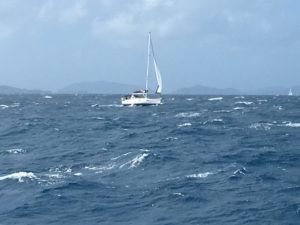 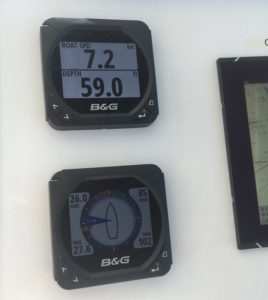 Other folks also found the ride a bit rough with the winds blowing quite steady at 25-30kt.

Enjoying the passage from the flybridge, the waves still managed to splash us a few times as the bow went under. Great fun…but we were glad to once again see the channel markers at Leverick Bay.

After mooring (which required two attempts for the port side, because I mucked up the lines around the front support…doh!) and deciding it was too breezy to snorkel, we headed ashore to explore more of Leverick Bay. Peggy & Jeff checked out a couple boutiques where she found some lovely earrings, and John & I poked around the well stocked dive shop. I was tempted by a beach blanket with a gorgeous print, but resisted, remembering how insanely stuffed my suitcase already was. We also peeked into the 2nd floor restaurant, to admire the elaborate carvings which decorated the bar and take in some fantastic views of the bay. Being Sunday, unfortunately it wasn’t open so we joined our friends for a couple drinks on the patio down below. It was a great afternoon to just relax next to the ocean. 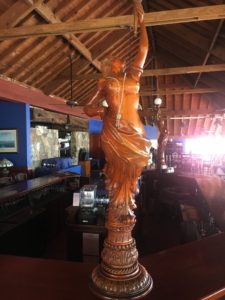 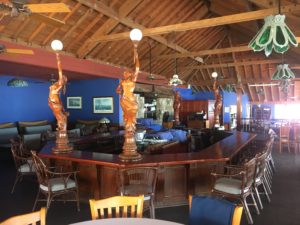 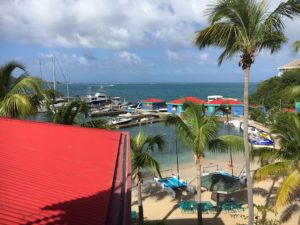 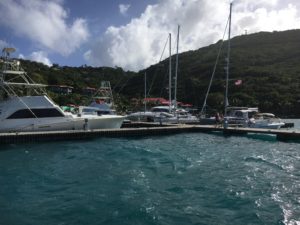 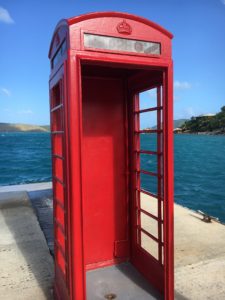 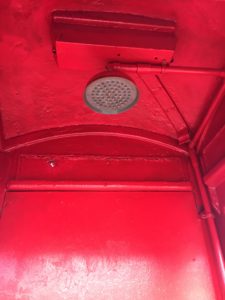 We returned to the boat for a tasty spaghetti dinner compliments of Chef Peggy. Again, we were thrilled with how stable and comfortable the galley is on the Lagoon 450. 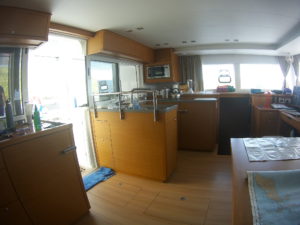 Painkillers topped off our evening as we discussed plans for the next day at Jost Van Dyke., when all of a sudden we hear a loud thud coming from the direction of the shore. It was dark by now, so we could barely make out what looked like someone shining a handheld green/red nav light along the port -side bow our our neighbour. We had been admiring the traditional looking boat throughout the afternoon. 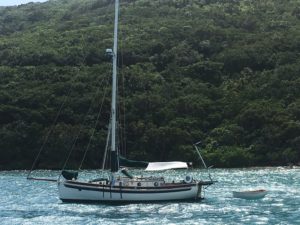 We think there was a couple on board with a small dog but never talked to them. We were trying to figure out why they were in a dinghy inspecting the bow our the boat when we suddenly realized it was not their dinghy and someone had hit their boat while returning from shore! No one popped up in the sailboat so they must have been ashore. It was an inflatable dinghy so likely no damage to the sailboat, but likely some damaged egos and dropped drinks in the dinghy…Wow!