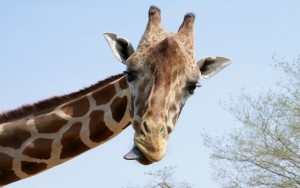 Giraffes…not sure why they fascinate me but they do. I can’t stop watching them whenever we’re at a zoo, and now I’ve discovered that giraffes live at the Montgomery zoo in Alabama where we’ll be moving next month.

The movers have just packed up the house, and those who know me have heard how I’ve been more-than-a-bit disappointed about Alabama being our next posting.  Partly because we thought we were headed to Colorado Springs for 3 years which sounded absolutely amazing since I love the outdoors, and partly because, well…let’s just say that I can’t see Alabama having the scenery and outdoor mountain fun that Colorado does. We were in Western Canada for a number of years and got to love the Rocky Mountains. There’s also a bit of disappointment about moving again after only one year, which limits my employment options but really, if I’m honest the disappointment is rooted in my complete lack of knowledge about where we’re headed. Other than being about 3 hours from the Gulf of Mexico and potential sailing & scuba opportunities, there hasn’t been much enthusiasm on my part about our new location.

So I’ve started doing some research about Montgomery to try and find out what it has to offer, and lo and behold discovered…Giraffes, among other interesting things. As I mentioned, if we visit a zoo I can’t leave without spending time ogling their exhibit. They are just such an amazing species of animal. I’m in awe at how high their elegant necks can stretch and the gracefulness of their movement on such slender legs. Yup, I’m usually gob-smacked.

As much as I’m excited about seeing the giraffes I’m also happy to know that they live at the Montgomery zoo because it seems to me that only well maintained and more expansive zoos offer giraffe exhibits. So this tells me a couple things…that the people of Montgomery are interested in seeing giraffes which may not be as cute as penguins or as intriguing as tigers, hence they’re not at every run-of-the-mill zoo. The other thing it says is that the zoo is well-funded enough to support a giraffe exhibit.

In our travels, we typically like to spend a morning or afternoon exploring the zoo. I’ve noticed that the quality of a zoo in general reflects the economic reality of it’s community. Think about it, the San Diego zoo is world-renowned as a must-see family attraction, centered in a city with a vibrant economy and active military installations.

On the other hand, the zoo in Barcelona was quite large and had many exhibits of interesting species, however it “had seen better days” with several unkempt exhibits which were empty or closed. Similarly the zoo in Naples Italy, was so poorly maintained that it closed entirely, reflecting the poverty of the average family in southern Italy. In Calgary Alberta, the zoo is immense and extremely well maintained which reflects the boom of oil over the past couple decades that has given an economic boost to the entire province. Interesting social-economic theory, eh?

So this brings me back to being happy about giraffes in Montgomery, which translates into being happier about us living in Montgomery. If my theory holds true then this means the people there have some diverse interests, and that the economy is likely healthier that I would have guessed. And did you know they also hold annual Shakespeare Festivals and Scottish Highland Games in Montgomery? It seems to be shaping up to be an interesting year!

…no, John didn’t write this.