We woke to a gorgeous morning. John found his way to a coffee and early morning swim before I even crawled out of bed! He spent some leisurely time on the bow, coffee in hand, looking very much “a natural” while checking out the rigging in prep for our morning sail to the Indians – a popular dive spot. I probably would have missed more of the morning had he not started knocking on the hatch over the bed. 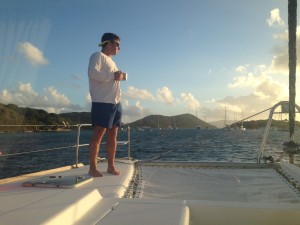 After a quick breakfast of fruit and bagels with cream cheese, we hoisted the main sail and started making way with 20ish kts of wind and 9-10 kts speed. 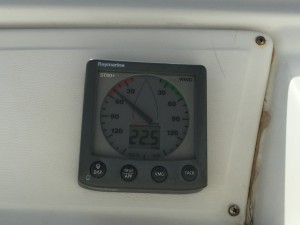 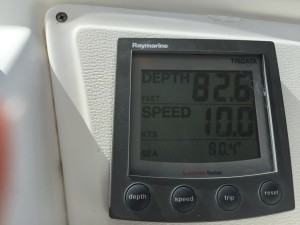 We had fun crisscrossing the channel with me at the helm and John tacking one-handed like a pro. And even managed to catch-up to and pass another Lagoon during our numerous tacks. Afterall, two boats means there is a race…

Everything was picture perfect until we heard a loud snap, then the main sail swiftly dropped. Just by chance it happened at the exact same time as when John lifted the clutch on the jib sheet getting ready for another tack. He said it messed with his head for a bit as he couldn’t figure out how the main came down by lifting that clutch. Had someone changed the lines on him again?! Captain Diego quickly inspected and reported that it was simply the shackle on the main halyard that had broke. Phew, nothing serious! We weren’t really pushing the boat hard so it was just one of those things whose time was up. Using the jib and some help from the engines, we puttered along to the Indians for our dive. 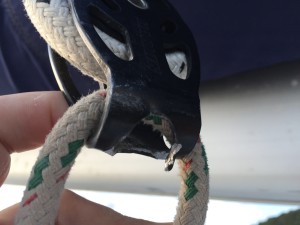 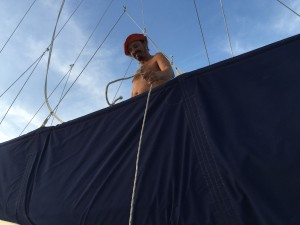 After safely mooring close enough to swim to the dive spot, we got prepped for our first dive in 8 months, starting with a refresh of some basic skills. The site had a good variety of typical Caribbean sealife such as puffer fish, crabs, kissing fish and even some tunnels and a cave. It felt great to be back in the water again! 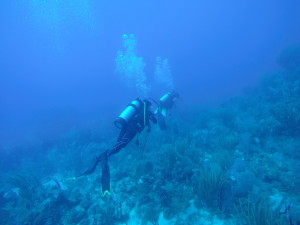 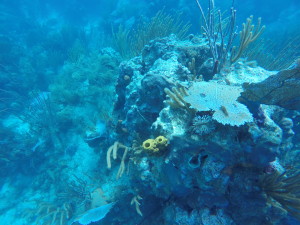 Back onboard, we snacked on some fruit to get the salt water taste out of our mouths then enjoyed another great lunch – turkey croissants with a nifty cranberry mayo spread and side salad of tomato, cucumber and avocado. We were definitely getting spoiled!

Next destination was Norman Island with me at the helm while John had a cat nap. Once we were safely moored, we decided to go onshore for a short hike. Behind the newly re-built Pirate’s Bight (which is highly recommended, too bad we had just eaten lunch), the trail meanders to the top of the Norman Island where you’ll find a helicopter pad (of course!) and spectacular views. Val joined us for the hike and did her best to answer my many questions about names of trees and plants we encountered. 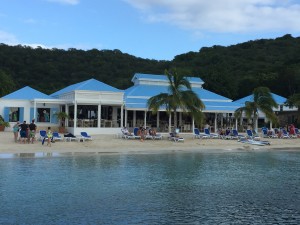 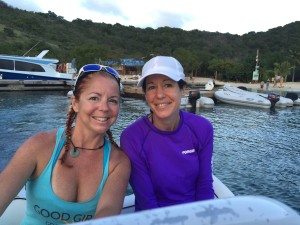 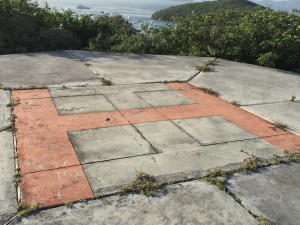 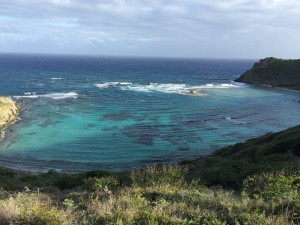 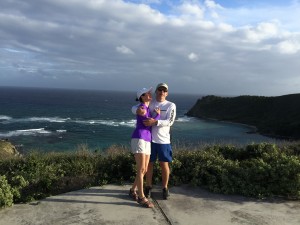 We stopped to admire the views part way on up the hill, and caught sight of the Black Pearl with Captain Diego suspended part-way up the mast. His project while we hiked, was to go up the mast and re-attach the broken main halyard. From the top of the hill, the boat was a speck but the mast still looked really freakin’ high. After soaking in the gorgeous views and taking a ton of pics, we headed back to the boat, anxious to hear about the Diego’s trip up the mast. It turned out to be more of an adventure than planned as the high-speed winch button had been sticking, so Amber had to use the slow speed and watch as it took forever to hoist him. Yikes! 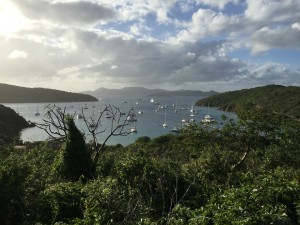 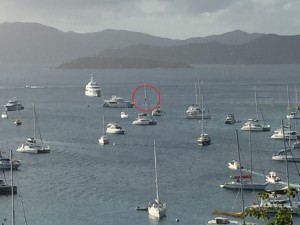 We did dinghy by the (infamous) Willy T’s, an old boat that has been converted into a bar/restaurant that is known for the wild late night hijinks of the many cruisers that mooring in the same cove. Since we’re now boring old people we just had a look on the way back from our hike. At some point someone mentioned that they had a craving for some ice cream. And wouldn’t you know, they have a boat for that here…which is also the same boat the comes to collect your garbage. 😮 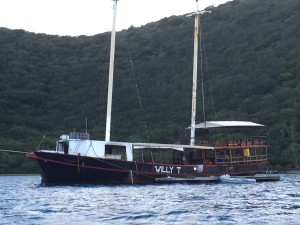 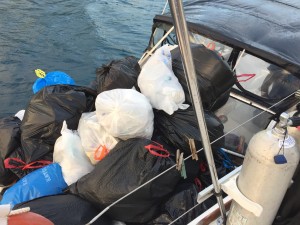 All was well, the halyard was re-attached and ready for action the next morning. We motored around the corner to a quiet and secluded cove, Soldier’s Bay which we had all to ourselves, except for a couple friendly turtles. We chilled for a while, and I wrote in my journal while John & Diego developed their bro-mance, chatting about boats, cruising and sports cars. Diego was really pumped to hear that John had built 2 cobra replicas – his absolute favourite car. Boys and toys! 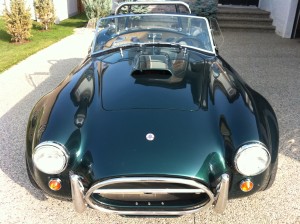 Dinner was served at 8pm and Chef Val had outdone herself again with grilled tuna steaks, couscous and sautéed yellow squash with ciabatta bread and our favourite red table wine, Chateau Ste. Michelle. We were also treated to fancy napkin displays compliments of First mate Amber – what a team!

It was fabulous to be outside each night for dinner. The side curtains helped block any intrusive winds or stray rain drops and we always had an amazing view of the water and islands. Oh look, it’s tarpon swimming by…I love this place!!