It felt great to be the first one up! We had Soldier’s Cove all to ourselves that morning and there was a terrific rainbow off the stern. I found the propane switch and got water boiling for tea before Captain Diego appeared on the scene about 7am, and immediately went to wake Val. Darn, he wouldn’t listen when I suggested he just let her sleep-in for a bit. Next time I’ll threaten him with throwing hot teabags!

For the next hour, I enjoyed spotting the turtles, brilliant red-beaked birds, and numerous rainbows while John snoozed away. He had got up in the night to MacGyver a fix for the squeaking joints in our stateroom – pieces of a magazine strategically folded and jammed in between sections of floor to stop the most irritating squeaks. Worked like a charm!

John presented himself about 8am to enjoy a coffee along with our “fun fact” of the day from Diego – why it was bad luck for sailors to be able to swim. Again, a plausible, almost believable tale from the Captain. After our breakfast feast of eggs with sausage and toast, we headed off to the cave at Treasure Island to do some snorkelling. We learned that this is the actual Treasure Island of which Robert Louis Stevenson wrote, and it’s thought that treasure still remains in the cave – pretty nifty!

The Caves are a popular snorkelling site and we could easily see why. Lots of parrot fish, Queen angel, Grey angel, yellowtail damsels, glass-eyed sweepers, etc. John was adventurous and went all the way to the end in the 3rd cave, and I was just being “girlie”, feeling a bit agora/claustrophobic when a dozen other snorkelers showed up. Actually, the toughest challenge was getting back into the dingy after the snorkel…good thing we’re in somewhat decent shape!

After getting rinsed off from the snorkel, we headed to Peter Island Resort with John at the helm. We managed to do 11.8 kts with full sail, with the boom out just a bit since we didn’t want to risk breaking something on the main again… 3-4′ seas and 20-25 kts apparent wind. We did reach 27.8 max wind which eventually prompted us to reef and pull in the jib a little, giving us 8-9 kts…still pretty fast. Captain Diego was excited about the terrific sailing conditions and John was doing awesome at the helm. OK, so the picture only has 11.2, but you can trust me 😉 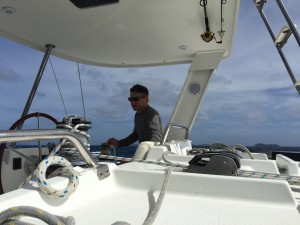 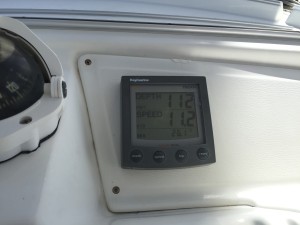 Of course, when there’s more than one boat there’s a race, so the 2 X boys were proud of themselves for overtaking everything the other sailboats we encountered. We seemed to be going much faster than an of the monohulls around, and we didn’t have a reef in at first like this guy did in another Lagoon 440 , so we slowly pulled away. Seems this was important to the male population on board…

Sorry about the winds noise. One of these days we’ll get a proper microphone.

We explored Peter Island resort for a bit while the crew got some ice and water. As soon as I walked into the resort lobby, I could smell the unmistakable scent of a fir tree…and lo and behold, they had a real Christmas tree! And it was huge! 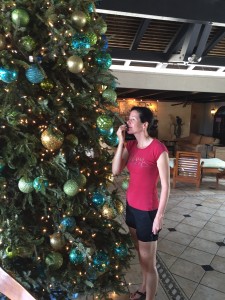 We hung out for a bit on the dock and watched the busy crew of the luxury yachts each over 100′, that were docked next to us, and thought about how miserable their owners must be. There’s always someone bigger. 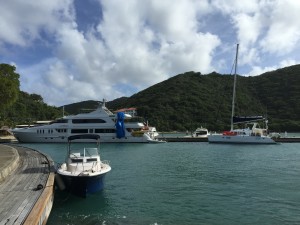 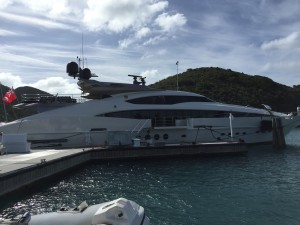 Back onboard our luxury 44′ yacht, we enjoyed mahi wraps and greek salad with caper vinaigrette. Diego discussed how he would attempt to spring off the dock to avoid encountering either of the huge and expensive boats beside us in such tricky winds. He then manoeuvered like a pro and we were off again, headed for Cooper Island, Manchioneel Resort where we would find Diego’s favourite spot in all the Islands, the Rum Bar. 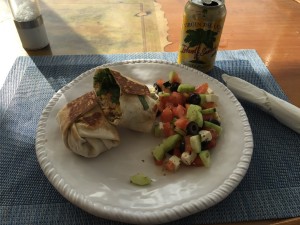 Unfortunately all the mooring balls were taken when we arrived, but not to worry, Diego decided to anchor near a pier. While waiting to ensure the anchor was holding well, John & Diego had a celebratory Tequila for their end of day sail and record breaking speed. I spotted a peculiar drone that hung out over our boat for about 3 mins then zipped back to the Manchioneel Resort. After taking some pics of the sunset, we hopped in the dingy for the short ride to the rum bar. 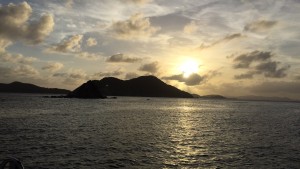 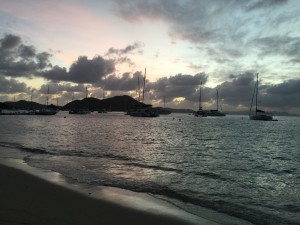 The guys sampled a couple rums and settled on Ron Zacappa XO which is incredibly smooth. Very nice choice! We shared the drinks, some laughs and a cigar before heading back to the boat. Unfortunately the anchor wasn’t holding well, so we moved to nearby Salt Island for more secure anchoring. Although it wasn’t as protected and a bit choppy, it was certainly worth the peace of mind to be safe. Chef Val provided another feast of curry chicken with pineapple jasmine coconut rice – delicious! 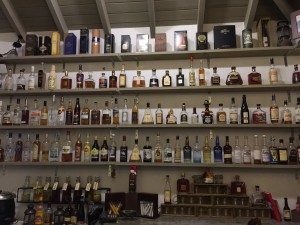 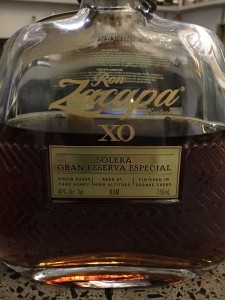 After dinner, we talked about the versatility of the saloon and moved the deck table inside to replace the coffee table. We discovered that the table makes into a bed with the saloon couch if you use the coffee table (short) legs. Clever! Next we discussed designing a galley island for Val and quickly realized we’d over-extended our engineering capability…guess we better stick to our day jobs. 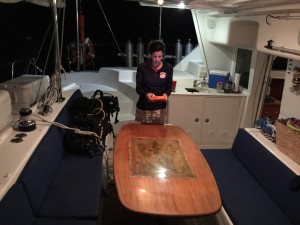