I never get tired of the spectacular views in the Caribbean, especially when they’re graced with a rainbow or two! John decided to hop in the water for a quick dip before his morning coffee, and I decided to stay inside out of the pouring rain that had just started out of nowhere…yes, I guess that’s how we get all those awesome rainbows. 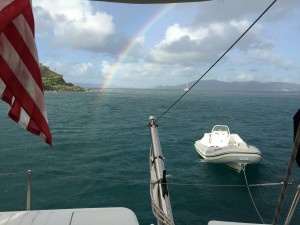 Captain Diego laid out plans for the day – a quick breakfast, an excursion on Salt Island, then dive the RMS Rhone wreck, and head to Spanish Town on Virgin Gorda for a few provisions. We enjoyed watching a couple turtles hang around off the stern while we munched on breakfast of fresh fruit and bagels. Our private anchorage at Salt Island was then interrupted with the arrival of a trimaran – Freedom, a rather infamous charter boat that is known for catering to swingers. 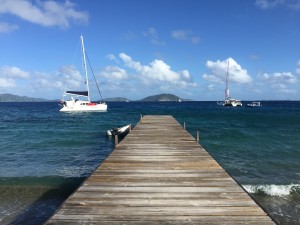 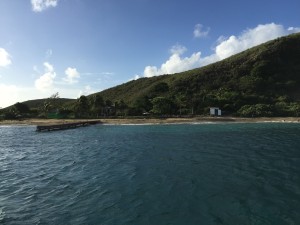 While digesting breakfast, we took a quick dingy ride over to Salt Island to do some exploring. There were several vacant buildings, a few of which looked like they were fairly recently occupied, and walking trails around old salt ponds. 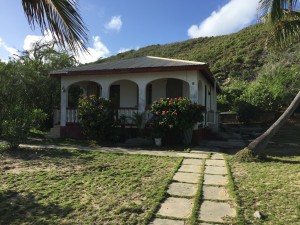 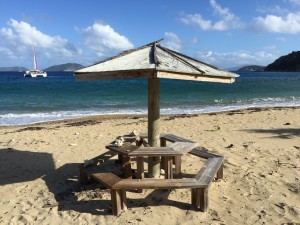 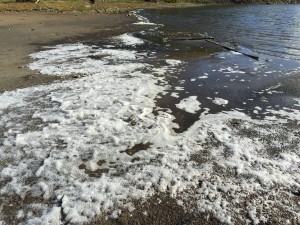 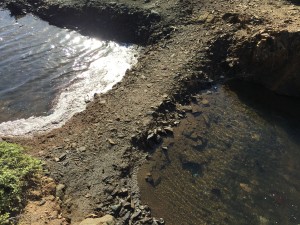 Salt Island has a fair bit of history associated with it. All At Sea has a short, fairly good article about it. A cruising blog called Impi likely has the best information that I have found about the island and events surrounding it. 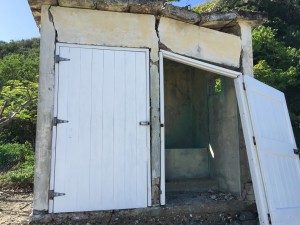 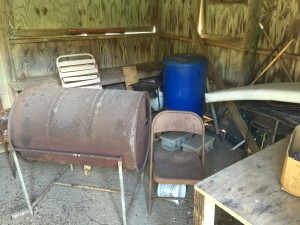 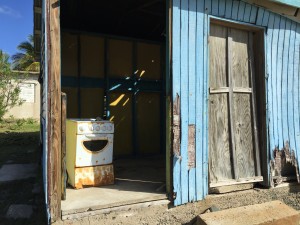 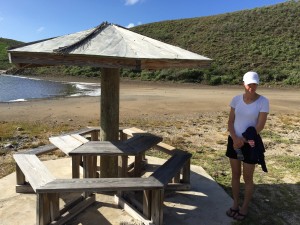 From the high ground, we had tremendous views and could see down to the RMS Rhone dive site which had a few boats already moored so early in the morning. Good that we decided to do our dive a little later! 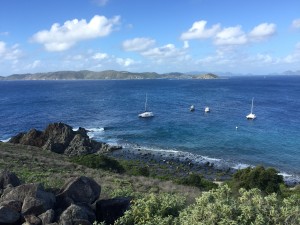 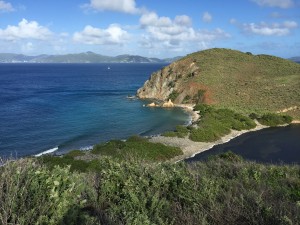 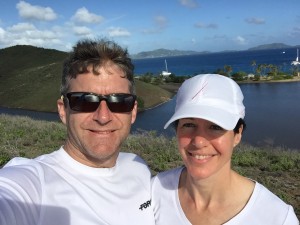 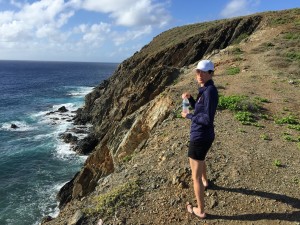 As we were headed back to the beach, we came across an interesting pile of seashells in rectangular shape near one of the outbuildings…and discovered a grave marker beside it! It was a modest family cemetery with the most recent occupant having arrived only two months previous! There were 7 graves in all that we could discern from the piles of shells and shrubs which scattered the area. Apparently a family occupied the island until just a few years ago, and when the last relative passed, he wished to be buried with his family on Salt Island. Certainly not what we were expecting on our morning excursion! 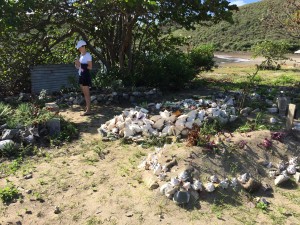 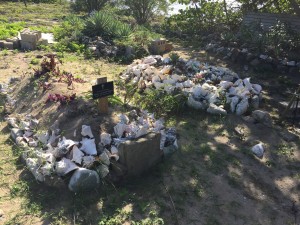 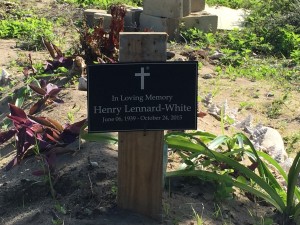 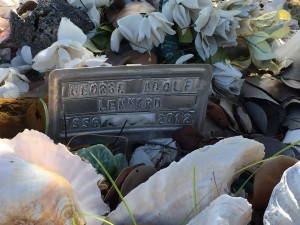 Once back on The Black Pearl, we went for a quick swim and decided to try out the new nylon hammock hanging from the davits. After much wiggling and squirming, I finally managed to get myself hoisted into the hammock. John decided to join me, and of course, he announced he was flexing for the photo…Boys! Although the hammock was good fun to try to get into, for true relaxing it really needed to be suspended from points further apart, perhaps the port and starboard stern cleats, to be comfortable. 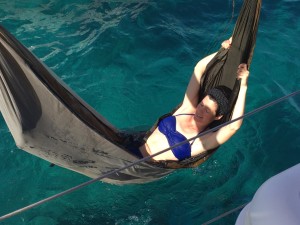 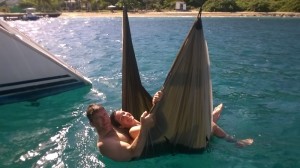 We then had contact on the VHF radio with our British friends, PK and Chrissie, who were on their honeymoon in BVI that same week and had bareboat chartered “Olive” a 31′ Beneteau. It just so happened that they were on their way to Cooper Island that morning and would be passing right by our anchorage shortly! How exciting – we had company coming for lunch! 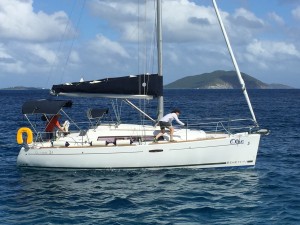 We watched as PK & Chrissie approached and adeptly anchored nearby, then Captain Diego picked them up in our dingy. It was so nice to see our friends and congratulate them in person since we couldn’t attend the wedding in London UK. After greetings and wedding congratulations, we realized that Chrissie was a terrible shade of grey. They explained that she had been quite seasick that morning, in large part due to the significant amount of rum consumed the night before and partly due to her trying to get her sealegs again. After a bit of time chatting on the flybridge and a ginger beer, her colour greatly improved. Lunch was a refreshing cold broccoli soup with ciabatta bread and coconut custard pie for dessert. Chrissie’s colour looked radiant again and she was ready to head on to Cooper Island. And it was time for John & I to prepare for our first wreck dive! 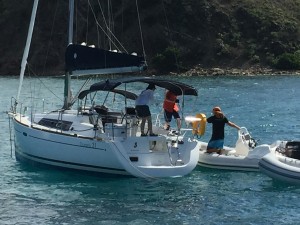 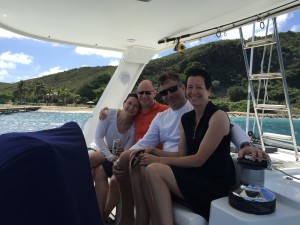