Merry Christmas!! I woke up early and quickly saw that Santa had not found us in our Caribbean location. Captain Diego soon appeared with my copy of Boney M 20 Greatest Christmas Songs

and thought it would be great to play some festive tunes to set the mood. He didn’t warn anyone that he thought it would be best at full volume!! I felt really bad for everyone else because Boney M is well…let’s just say it’s an acquired taste. For the Christmas album, you can tell it was made as a legitimate attempt at singing carols, but you just can’t get that disco vibe out of your head when you remember who is singing the songs.  Anyone who came of age in the 70s or 80s will remember the dance club staple Rasputin. John’s head soon poked out of our cabin door. “Make it stop!” It really was loud. Diego soon relented and turned it down a few notches. Considering how many speakers are on this boat, I’m sure the neighboring boats in the anchorage were appreciative. 🙄

First mate Amber appeared wearing festive red & green and Chef Val was sporting a very nifty Santa hat with blinking lights. Coffee and tea were on, and bacon was soon frying – a great Christmas morning. Breakfast was a tasty spinach and bacon quiche and then it was present time! Our sailing adventure was our “real” Christmas gift but I had brought along a few little gifts for John: a cool little bottle light, Harry Potter – Bertie Botts Every Flavour Beans, iPhone polishing cloth, and a tiny metal model of the Black Pearl Pirate Ship

What else should folks do on Christmas morning? Go diving, of course! We got suited up and headed across the anchorage to Diamond Reef. After a brief delay (oops, someone forgot the dive flag), we were underwater exploring one of the better diving reefs in BVI – lobster, file fish, Queen trigger, yellow tail, snapper, fan, barracuda, and the ever present sergeant major. John even got to use his new “James Bond” dive knife. The visibility wasn’t great, but we are really getting into diving. We’re going to have to install a tank filler whenever we buy a boat! 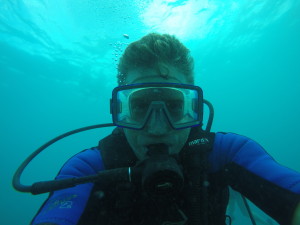 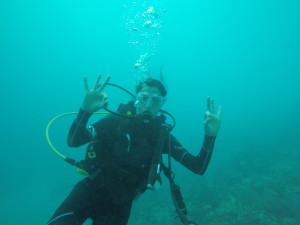 When we surfaced, we realized that a nasty squall had blown over and it was still blustery. Back on board, we discovered that several of the hatches were left open – yikes! We had soggy cabins due to the big squall…thankfully, only our blanket and headboard got wet. We were still a bit chilled from the dingy ride back so we had a hot tea which warmed us quickly. The crew quickly sorted a way to hang the bedding in the salon, giving it lots of air to dry out. Otherwise known as the tent of shame… 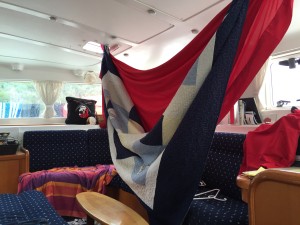 Chef Val found a can of chick peas and threw together some yummy hummus. I was constantly amazed at the great variety of food we were enjoying. Val then showed me her pantry and we chatted a bit about the fine art of provisioning. The key seems to be planning ahead to make good shopping lists, and then know what works well as substitutes when you can’t find just the right ingredient at the little marina grocery stores.

As we chatted the skies cleared and with the brisk breeze blowing through the salon, it didn’t take long for the bedding to dry. When our crew tried to convince me they were here for doing jobs such as bed-making, I insisted on making the bed myself. I really want to get a feel for what life will be like when John & I are living onboard. If making a bed is a huge pain-in-the-butt, well, now is the time to figure that out! Could be a deal-breaker for us living-aboard. So the crew, and John, were happy to see me return from the cabin a few minutes later to report that the sailing retirement plans were still on – there was ample room in our cabin to get the sheets & blankets back on and tucked-in without bruised elbows, or a whacked forehead. 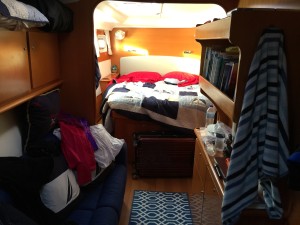 While I enjoyed a warm shower, John was entertaining himself by watching the sealife in the cove where we were moored. It was a peaceful Christmas afternoon on Marina Cay. A Lagoon 450 pulled up beside us to inquire about mooring next to us…hmmm, perhaps we should encourage them to give us a bit of distance with our Boney M music.

Captain Diego took us over to the dock for a stroll on the island while Christmas dinner was being prepared. We were surprised to find a Canadian flag flying alongside a BVI and German flag at the small resort. 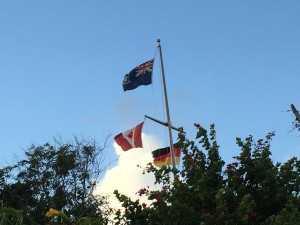 The island is really tiny, with only Pusser’s giftshop, restaurant and resort. One really neat feature is a vintage British phone booth, with a webcam that takes pictures once every minute for anyone who happens to stand patiently, and then posts them online for the world to view. You can find them on their website. The dock also offers a taxi service to nearby islands, which is really handy for attending the Full-moon party each month at Trellis Bay. It just so happened that this was a Christmas full-moon! 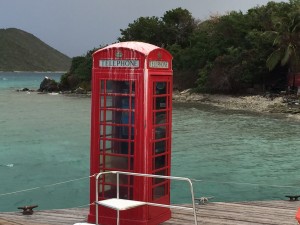 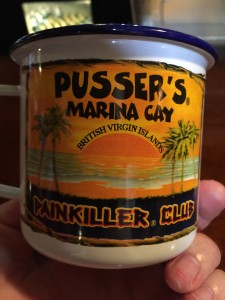 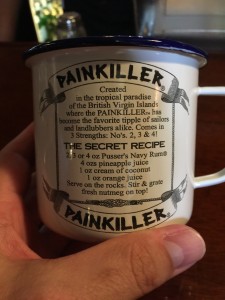 At the top of the island, the original house built on Marina Cay is still there and used by the resort. 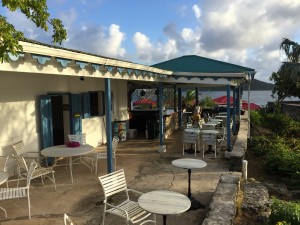 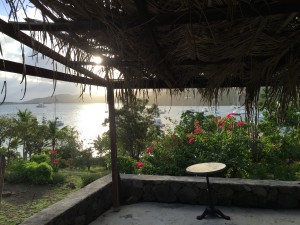 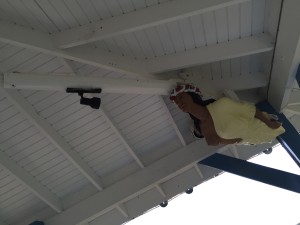 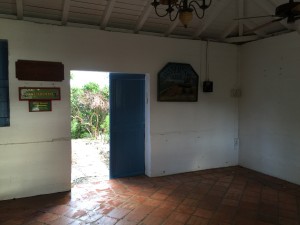 On the way back to the boat we stopped into the tourist store. John was quite amazed to find Brunswick Sardines for sale, as they are canned in Blacks Harbour, about 45 minutes from where he grew up in St. Stephen, New Brunswick. They would eat them right out of the can, or get wild and crazy and eat them on toast. Here’s a modern recipe for this traditional meal to give you some idea, courtesy of jenreviews.com. 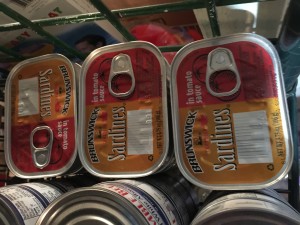 After our stroll, we arrived back on the Black Pearl to enjoy appetizers with the crew: Kahlua walnut raisin Brie with crostini (yup, as delicious as it sounds!). The main course was beef tenderloin cooked perfectly medium-rare with veggies, our favourite meal! With full bellies, we headed to the dock to wait patiently for the water taxi to take us to our first Full-moon beach party.

The scene at Trellis Bay was definitely party-time! Loud reggae music, lots of people, plenty of refreshments and fire! In the daytime and during full-moon parties, Trellis Bay offers an eclectic assortment of artsy shops such as pottery, metal-working, and painting, as well as bars. We were really impressed with a live pottery demo by Aragorn’s Studio where they explained the process of firing pottery and then removed several freshly-crafted pots from the 1700°F kiln. At the shoreline a crowd gathered as a couple men and their boys tried to light on fire the 20′ metal effigy positioned 6′ off the beach in about 2-3′ of water, the BVI version of Burning Man. 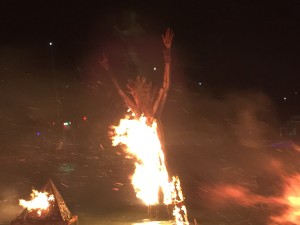 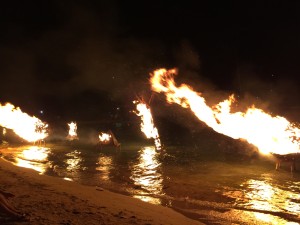 Trying to take a selfie without catching on fire is a challenge! I think they got a little ambitious with the fuel used to start the fire. There was so much wind it was proving difficult, so they just kept pouring more and more fuel onto the statues. As the wind gusted onshore 15-20 knots, we were certain that someone would go up in flames along with Burning Man. The right picture below shows them making the Molotov cocktails that they used to light the statues. 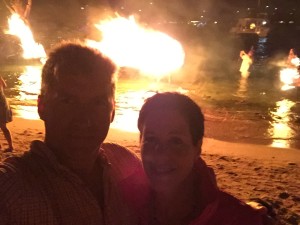 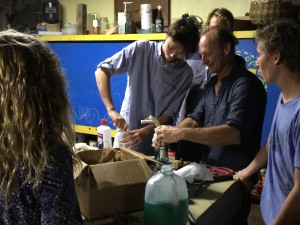 Soon after the fires started, one of the main attractions appeared, a Moko-Jumbie, a legendary character who dances on stilts on the beach and wards off evil spirits. Again we were amazed that no one who rushed out to have their picture taken with Moko-Jumbie and the burning men statues, was caught up in the hot embers blowing everywhere.

On the way back to our boat, we spied a large blow-up swan tied to the stern of a neighbour’s boat. We briefly contemplated kidnapping the swan and tying it the stern of another nearby boat that was owned by a good friend of Diego… and then reason resumed and the Christmas caper idea was quashed. Back on-board the Black Pearl we discussed the antics of the Full-moon party while enjoying a snickers ice cream bar. A great way to end our Christmas Day 2015.