We left from the Lake Worth anchorage just outside of Palm Beach with 2 other Leopard ctamarans. We got up at three in the morning for planned departure and anchor up at 3:30. We had done just about everything the night before so we could just wake up make coffee and tea and get going.

When we woke, we had a message sent the night before asking if we could now leave at four in the morning. I whined at the loss at 30 minutes sleep, as I really didn’t get any, but that did give us a few more minutes to think about what we needed to accomplish, check weather, go over some contingencies, etc.

Lifting anchor in the dark after a number of 360 degree swings over the last few days was rather uneventful. Christa has very little difficulty taking indication where to go and cleaning the anchor off with the deck hose. We ended up leaving the second of three boats that had to navigate through a channel between private docks and the busy anchorage in the middle of Lake Worth. This picture shows what most of the transit look like out to sea. 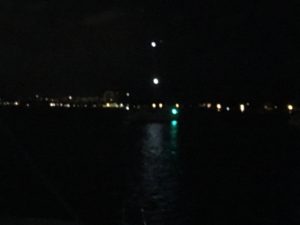 Once we felt our way through the dark and into the inlet, our journey should have become much easier but there was an out flowing tide and a strong east wind making the waves quite tall and causing a boat even as big as ours to bounce around as if it was a small toy. Christa had been on the bow keeping a watch during our transit and I got her to come back to the cockpit just before we hit the violent current and wave action. Added to this the fact there was very little horizon to discern and we both knew from our experience sailing around Malta in the dark that we could easily slip into motion sickness.

Once we finally cleared the inlet and got into open water the waves didn’t really let up. The forecast was for 10 kts or less, and seas of 2 feet with a 7 second period. What we actually experience was 20 kts and seas that were as high as 6 feet with a very short period. Of course since the wind was right on the nose we couldn’t raise sail to stop having to motor nor try to dampen the motion of the boat in such confused seas.

Of course at one point I had to use the head, so I went below and also realized we had forgotten to empty the toilet bowls of all the water that could be splashing around in such heavy seas. After I came up, and proud of myself for being able to  use the head in such conditions, I soon realized that violent motion and lack of horizon was starting to get to me. Getting distracted down below and looking for a few things in nooks and crannies had been a bad idea. At one point, one of our buddy boats asked how Christa was doing, and I sucked it up to reply that she was doing better than me after going down below.

So from about 0430 until about 0630 it remained dark and unpleasant in headwinds as motored towards the east. The sun eventually came up at 7ish and gave us  something to look at so we could stop feeling sorry for ourselves and the less-than-desirable conditions. The seas became less confused, although remained much bigger than forecast. 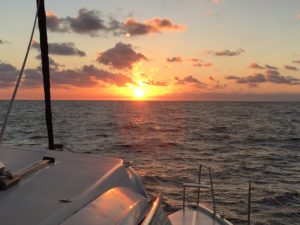 We communicated between the three boats with our handheld VHF radios on Ch. 68 and maintained listening watch on CH.16 on our main VHF. There was no real formation/flotilla planned, just head the same way the same day and we’d meet each other over there. It did turn out though that we never lost sight of each other, and of course had plenty to “comment” on with respect to each other’s chosen route and choice of sail configuration as we (still) motored towards the east. 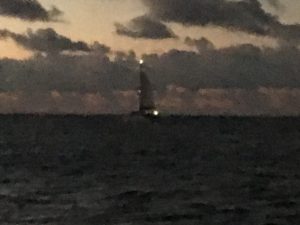 We had completely forgotten about our fishing poles, until we heard one of the other boats say they had a fish on. I set one of ours up, and within the hour we caught a fair sized Mahi Mahi. In the end the 3 boats caught 4 fish (and a Barracuda that was thrown back).

In our attempt to limit what toys vs tools we bought, while still trying to have the right gear, I continually mentioned to Christa that we really had nothing for when we caught something, and now our fridge/freezer was full so nowhere to put it. So now here we are with a fair sized Mahi Mahi, approx 27 inches long, and no real idea what to do with it.

One of the things we did prepare for, was to have a big bottle of cheap booze that we used to pour over the fish’s gills. This gives the creature “an easy transition” or perhaps it’s actually easy for the humans so they don’t have to resort to a more violent beating or stabbing to kill the fish. 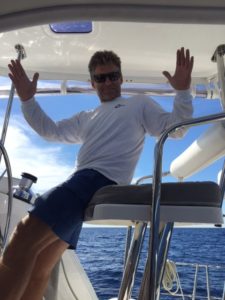 After our catch had passed into a Costco Vodka induced slumber, I immediately inquired as to the whereabouts of the meat clever that I insisted we bring for just such an occasion. I reasoned I could quickly remove the head, tail and innards and chop-chop-chop into steaks and we’d be off again. Of course neither of us knew where it was and Christa resorted to sawing with a large kitchen knife to try and perform the same task. 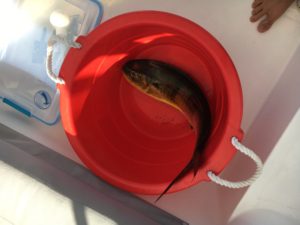 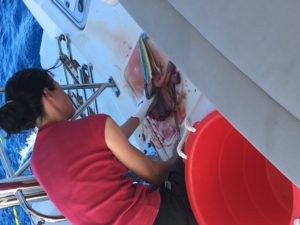 At about 1pm we first spotted the water tower at Old Bahama Bay approx 12 miles out, and we dropped anchor in crystal clear water at 4pm. We could start to see bottom at about 50′ depth, but the bottom was more rocky than sand so it took a couple tries to get the anchor to hold. With crystal clear waters, it was easy to see where the chain laid.

All three captains jumped into the same dinghy and we set off to clear-in with Customs and Immigration. I planned to take advantage of the fact I was a “newbie” compared to the other 2 seasoned cruisers. One of them actually knew a number of the staff by name. When the nice lady asked how long I would like to stay, I said to please forgive my ignorance, but how long can we stay. She said that it was up to the officer in charge, which was her. I will tell you it was my charm and innocence, Christa will say it was her pity on me, but in the end we got 6 months in our passports and a 1 year cruising/fishing permit for the boat for $300. They also now take credit cards without a surcharge, so you don’t have to use your cash. 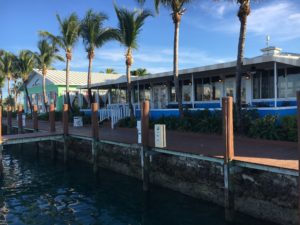 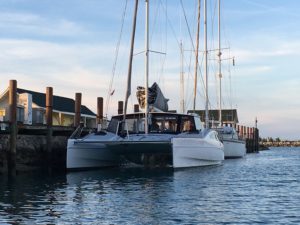 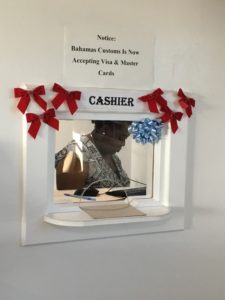 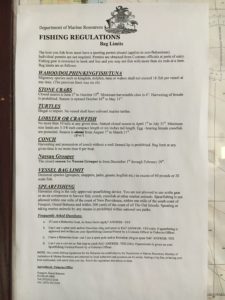 Raising the Bahamas Courtesy Flag, and our 1 year cruising permit. 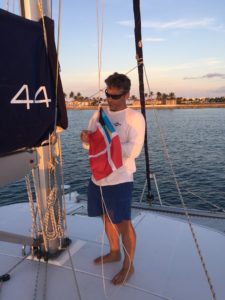 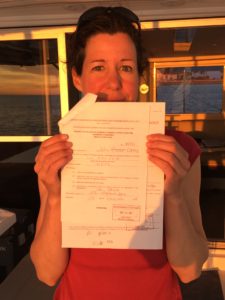 For the end of the day we went to one of the other boats where our gracious hosts showed us a number of different ways to filet and cook the fish that everyone caught en route. 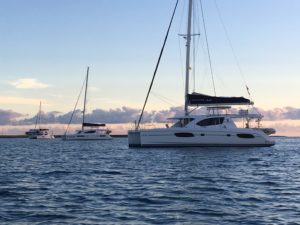 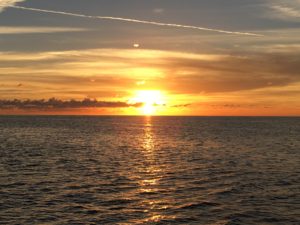 Our plan is to head around to the south shore of Grand Bahama Island to anchor after a short cruise, before heading off towards The Exumas.