After we crossed to West End, everybody decided it would be good to sleep in the next morning and leave at 10 am since we only planned to head around the corner to the south shore of Grand Bahama Island. Even though we planned a late start, I still woke up around 0530 like I always do. I tried not to make any noise to wake Christaf and went outside to watch the sunrise.

As soon as Christa got up about 10 minutes after the sunrise, I started the generator so we could heat some water and make toast. We left with no specific destination other than a place just east of Freeport called Barnetts Point that was supposed to have good anchoring.

Freeport is a major industrial area teaming with freighters, oil tanks, cruise ships and lots of heavy equipment from about 3 miles offshore. All the guides and everybody universally said don’t bother going in there and less you absolutely need to for bad weather or for repairs because it’s very urban and can be a high crime area.

There’s a very light wind again today maybe only 5 or 6 kts, directly on the nose just like it always is. Two of us are motoring and one of us is motor-sailing with his main up. There has actually been very little sailing for us on this “sailboat” so far. As we turned the corner and headed more to the east, we managed to get enough wind to unfurl the genoa and motor sail a bit. The furling line got a bit mangled in the drum, so that gave me something to do as we slowly made our way east at approx 5.5kts. We eventually pulled in close to shore near Lucaya and dropped anchor at 1500. The sea bed is at both West End and Lucaya is something the our cruising companions call “marley.” A combination of rock and hard sand, so you have to pick your spots carefully. We got the anchor to dig in very quickly on our first try, and we managed to stick it under a rock, as you can see in the picture. The water is so clear here you can see that through 13′ or so of water. 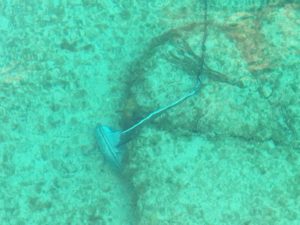 That situation is fine if you don’t want to move anywhere in that particular direction, but if the winds shifts, you can drag, and it could be a problem lifting it in the morning since you now have the weight of the rock you may have to lift as well. The next morning we tried to lift anchor from different directions about 270 degrees in an arc with no success. In the end, what worked was our original into-wind direction when we dropped, and simple forward and back rocking motion with tension on the anchor, much like you would do trying to rock a car out of the snow. Christa lifted her head with a surprised look, and said it was out. 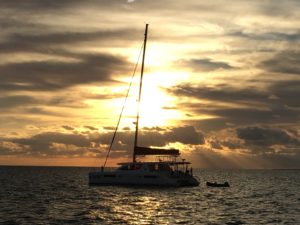 After another great sunset, dinner and drinks, we decided to leave at 0800 to try to make it to the other end of the south shore, as the island turns south in a place by Sweetings Cay. Our plan was to get there by 2 o’clock so we can spend time in the water/beach and have a bit of a Christmas feast with some thing manly hunters were going to catch. 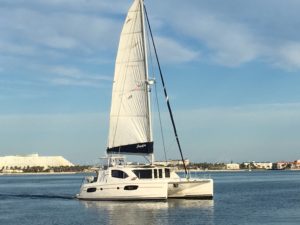 We managed to get going at 0802 with our “rocking the car in the snow” method of anchor extraction, only 2 mins late, with our cruising companions looking on for added pressure. Again, we started with light winds from the north so we motored on both engines for the first 10 miles or so. Finally the wind started to build, so we progressively raised the main, then the genoa, then shut one engine off, then the other. Finally some sailing! We managed 7+ knots for the better part of the day, peaking at 7.7 speed over ground (SOG) in 14kts of wind. 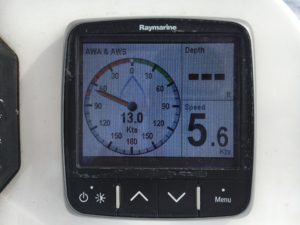 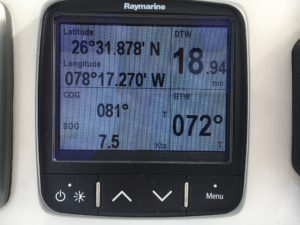 I didn’t manage to catch our top speed in the pic so technically it didn’t happen. 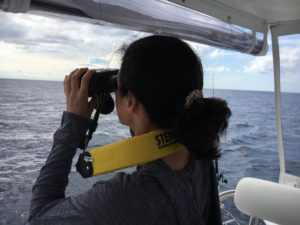 Christa looking at a ship far off on the horizon with our awesome Steiner binoculars.

We dropped anchor at 3 o’clock and after putting the boat to bed, I dove in to take a look at the hull and to see how the anchor set. We paid someone to clean the hull before crossing, but it seems that he didn’t do that great a job. I swam along the anchor chain to see how our big Rocna 33 anchor set in the soft sand. This should be the type of sea bed we can expect as we continue south. Easy to set and retrieve. Awesome.

Christa was happy to be able to swim in her own swimming pool…where ever and when ever she wants. 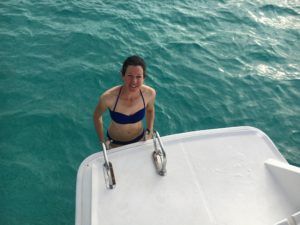 The three girls got an a dinghy and went to the beach and the three boys headed off in another dinghy all bombed up with snorkel gear, pole spears and thinking they would bring home a feast for Christmas dinner.

We never saw any lobster, but towards the end we saw a big hog fish, which are considered a delicacy. Unfortunately, Bryan’s bungee broke just as he was getting ready to grab our meal, so he grabbed mine (since I didn’t know what I was doing) but he only managed to convince the big fish it was time to leave the area. We followed it into a coral head but he was hold up well, and it was getting dark, so we won’t be having seafood for Christmas dinner. 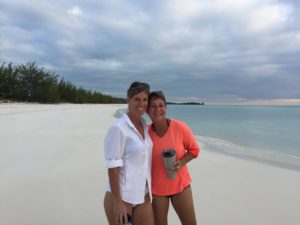 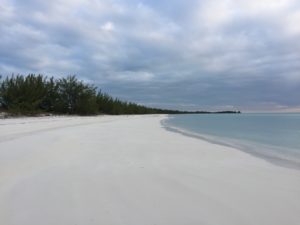 The girls had a great time on the beach looking for sand dollars, beach glass and enjoying the soft white sand. They even had to contend with an aggressive crab, defending his turf from the invading species. “Hey…hey…hey!” 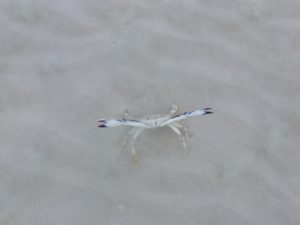 Well after sunset, we had a more traditional Christmas dinner with ham and veggies, a big desert and our hosts even gave everyone Christmas presents! The boy’s were wrapped in West Marine (think Home Depot for boats) brown paper bag and duct tape of course. 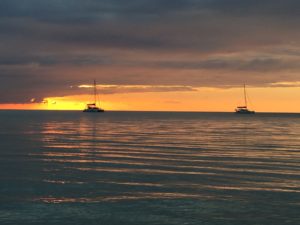 Crossing To The Bahamas
Checking out Moore's Island Bahamas