We sailed into Moore’s Island harbor on December 27th. Anchoring near the dingy docks was a challenge. With shallow depths, the engines churned up weed and it quickly became impossible to see our anchor. Added to that was an interesting current which turned us around away from the wind. We finally got a solid hold…much different than the last anchorage!

One of our friends on another catamarn was heading to shore to get a sim card from BTC, the local cell provider so I hitched a ride to do some exploring. Arriving at the dingy dock at Hard Bargain, we were greeted by friendly locals cleaning their catch of the day…mounds of conch to sell to local restaurants. 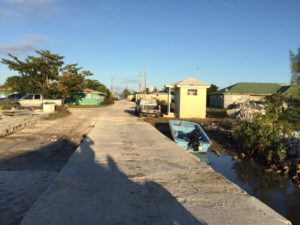 They kindly pointed us towards the BTC store, at another settlement about a mile up the shore in The Bight. We climbed back in the dingy and headed off. We were again greeted by friendly locals cleaning fish on the docks with well practiced hands. They directed us to the BTC store only a 3 min walk up the sandy main street from the docks. 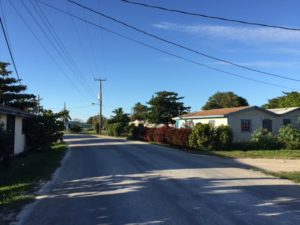 Across the street from BTC, was a little grocery store that sold a few canned staples and fresh produce. Unfortunately they were completely out of anything fresh since it only arrives by mail boat once a week. I found a jar of interesting seasoning for only $3.80. 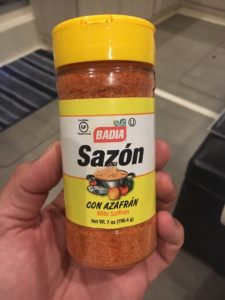 We continued to wander up the street, enjoying the local foliage like this banana tree. 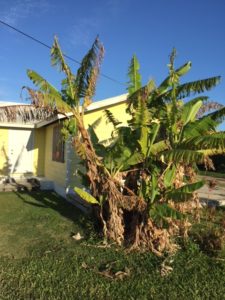 We came across another larger store with a closed sign. Bummer. Our friends soon joined us and they didn’t find success either. Due to the cell service not working well at that time, they couldn’t get a card and would have to return in the morning. As we strolled away from the store, a car approached and the shop keeper, Natalie greeted us. She said her store was open and invited us in. Evidently, she left her store with someone else to mind it, and they had not actually do so. Doh! The store was actually a couple small rooms in what we would consider an average sized bungalow back home. There was a decent selection of fresh produce, dairy, bread, and lots of staples. I was happy to get a couple apples and the others were thrilled to find fresh tomatoes!

We had a great chat with Natalie and she explained how she is a nurse at a local clinic as well as runing her store. A very industrious lady! They have 4 nurses that care for patients on the island and for any issues that need a doctor’s care, patients fly to Grand Bahama Island or to Nassau. Commercial rates are about $70 but to charter a small 5-seat private plane with is about $1500. I think she said the pilots name (which I forget) and that he was Canadian! We then chatted about various places we wanted to visit and where we had already been. I was a bit surprised that Natalie had never made it to the south part of The Bahamian Islands.

Back at the dingy dock, I was amazed at the mounds of conch shells along the shore. 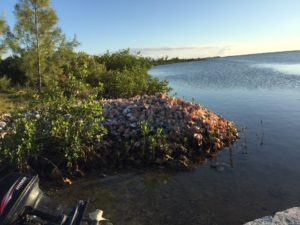 On the ride back to the boat, we got soaked with the dingy riding into the choppy waves the entire way. We arrived at the boat just in time to watch the setting sun dip below the horizon. 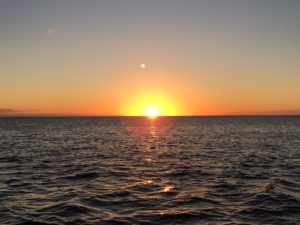 Our buddy boaters “claim” they saw the elusive green flash but even though John & I watched intently, we have yet to witness it. We’ll have to keep watching for it!