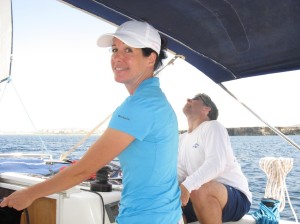 In Part 1, we wrote about what we thought of the boat we spent the week on, and what we think we want in any future boat, either chartering or buying. The other reason we were there was to get our Royal Yachting Associations (RYA) Day Skipper Qualification.

We have both been doing self-study courses through CPS which you can read about through our previous posts. While they gave us the background and theory towards the knowledge that we would need for cruising, what we were lacking was actual practical experience on a sailing vessel. That is where Sailing School Malta and the RYA come in.

Even though we are taking a gradual, incremental approach (unlike some couples like Zero To Cruising who made their decision and started living onboard inside about a year), the Day Skipper is a bit of a milestone as it will allow us to bareboat charter in our area, and apply for an International Certificate of Competence (ICC) which will open up more possibilities throughout Europe.

On completion we are to be able to skipper a yacht on coastal passages by day and night. Official course content included:

We were on the course with 2 other people. Our instructor also got each of us to prepare a session on 1 of 4 topics:  SAR Helicopter rescue; Life Raft use; Life Vest/Floatation Devices; and Rescue Flares.

We also did some practical exercises which were very interesting like Man Over-Board (MOB) drills and the Heave To manoeuvre. This last one seemed very unnatural before we tried it a few times. With our experience coming from mainly small power boats, this manoeuvre, which entails turning the boat perpendicular to the wind, seems counter-intuitive and would seem to set you up for allowing the wind to knock you down deliberately. With most of our time in sailing vessels having been in bosun class dinghies, this was always possible. After we performed it a number of times, it is actually quite benign, and is in fact one of the ways you can give yourself a break to go down below or wait out unfavorable conditions.

While you always risk having little-to-no wind while on a sailing course, that was not an issue for us. We had a steady 10-15kts from the south for most of the week, with things getting “sporty” in the middle of the week with us sailing around in a good Force 6 wind and associated waves. We were trying to beat into the wind to make it down to the main container port on the south of the island, by Birżebbuġa, where we would drop anchor and eat lunch. When the instructor asked what we thought of the winds, you could see the group had been focussed on their various tasks and hadn’t really thought about the conditions they were in. Suddenly it donned on everyone that we were in conditions that we should be worried about, but at the same time with the 2 reefs in the sail, and John looking calm at the helm, it really wasn’t that big a deal even at our level.

When the instructor asked John what I thought, he replied that he would never be out here on his own, but since he knew the instructor would never let us do anything to put him in danger, and he was sitting back with his feet up, he wasn’t worried at all. For my part, I started to become aware of the conditions after I went below and saw the water above the galley window for the first time (my favourite moment of the trip). As with most weather in Malta (evidently) the strong winds past, and we settled down into the typical 10-15kts again. 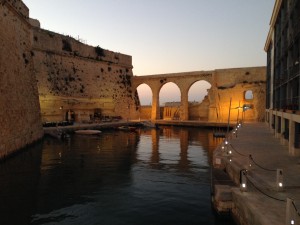 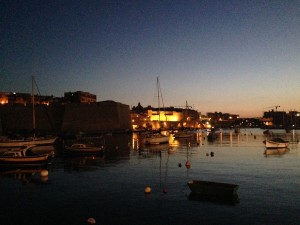 We also did some night sailing on the course. As we waited for the sun to go down enough to actually call it night, it was hard to concentrate on the task at hand with so much great scenery to take in all around us.

Unfortunately John’s iPhone in its waterproof case does not take anything resembling a useable picture at night. The sky was clear with a steady 15kts and 3-4 foot waves. It was great to be cruising off the coast of Valletta with the warm breeze and the city lighting up the horizon.

Overall a great experience in Malta and with Stephen from Sailing School Malta. We’re already planning our next trip back to try and schedule the next step with him for the RYA Coastal Skipper Qualification, which hopefully will include a night passage to Sicily and back.

The book he primarily used as a reference with us was

Yachtmaster for Sail and Power: The Complete Course for the RYA Coastal and Offshore Yachtmaster Certificate by Alison Noice. We were using the 2004 edition, and have just ordered the most recent 2012 edition from Amazon, which has both hardcopy and Kindle.

We got sucked into the Amazon recommendation and ordered the companion book Questions And Answers for the RYA Coastal and Offshore Yachtmaster Certificate. It should help us get ready for the next steps though, and the main book was very easy to follow. Hardcopy and Paperback, but unfortunately no Kindle version.

Another neat item that we saw for the first time was Quick Reference Cards from Davis Instruments. You can get them from Amazon if you’re a frequent shopper or it maybe cheaper direct from Davis depending on the shipping. They are plasticized and fairly tough so you won’t be afraid to take them on deck with you.

We seem to be well on our way… 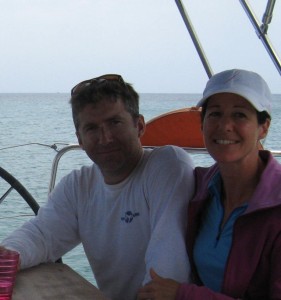