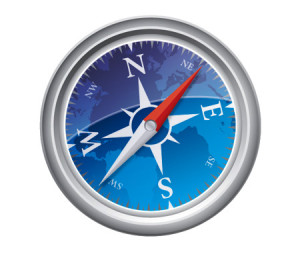 Our birthdays are only a day apart so we took the opportunity recently to buy each other something for our sailing gear bags. There are lots of sailing gear list out there, and we’re not wed to any of them, nor have we started to put together our own list yet. Perhaps this will be the start…

For completely arbitrary reasons we decided to buy ourselves a hand bearing compass, also sometimes called a hockey puck compass.

Since we want to have individual gear bags we took the opportunity to buy 2 different models to see which ones we like the best. The decision to purchase these 2 was not very involved. It was merely a matter of doing a Google search and seeing which ones came up the most in articles and forums.

What we settled on was a Weems and Plath Hand Bearing Compass for Christa and a Plastimo Iris 50 for John. They are both about the same size at 3.25″ in diameter, but you can see the Plastimo has a bit of an odd shape. We’re not sure what advantage this is supposed to give the user, other than perhaps looking different than its primary competition. The  Plastimo also had an optional belt mounted holder available, so we ordered that as well, although in hindsight it is a bit of a pain to insert and remove the compass, and we’ll like only use the attached lanyard as a neck strap. 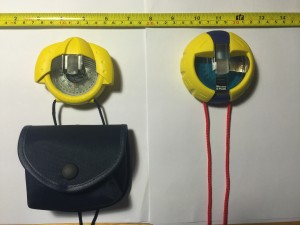 The Weems and Plath model has been around since 2005 (but don’t quote us on this) and is a very popular product. Even as we write this, it is out of stock from their website. Not really an issue as you can likely find it cheaper via eBay, Amazon or other 3rd party retailers.

It is perfectly round and will fit easily in your hand with a yellow non-slip rubber coating with a blue backing that feels secure even when using it in the wet.

The compass is graduated in 1 degree increments which are viewed through a lenses on the right on the main face that slightly magnifies the compass card. So far we have only used this in our living room and the car, so we can’t speak to the compass underway, but for John (who has a lot more navigation time) would rather have clear visibility of the rest of the compass card that is partially hidden under a blue film. 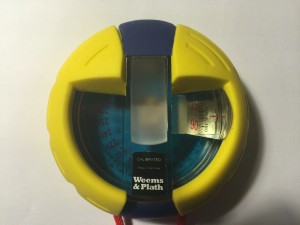 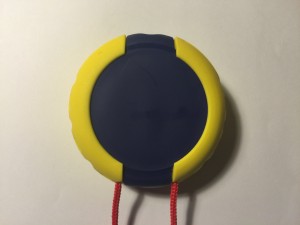 There is also a interesting prism the company calls an “infinity prism” that is supposed to remove/reduce parallax error where you take a bearing with the compass close to your eye. This is different than say a typical compass you would hold at arms length and aim like a pistol which makes it more prone to errors on a pitching deck…Or at least we think that is the issue. 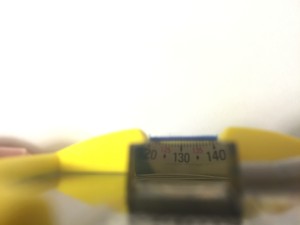 Another neat feature is that it is photo luminescent, although whereas the blue film reduces visibility of the compass card in daylight, the amount of luminescent scale you can see is only through the little lens. This may not be too useful in practice on a dark night in anything other than perfect conditions. A secondary light source will definitely be required. 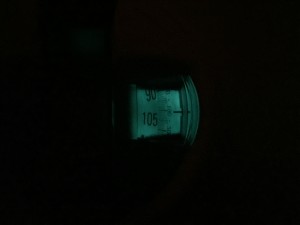 It does come with a lifetime warranty, which is rare for manufactured products these days, and it is made in Denmark which is equally rare. The instructions are very brief at only 2 paragraphs so you’re going to have to learn how to use a compass elsewhere. Care with warranty information is also included in the very brief trifold that comes with the compass. 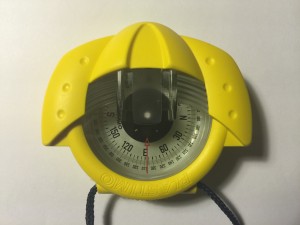 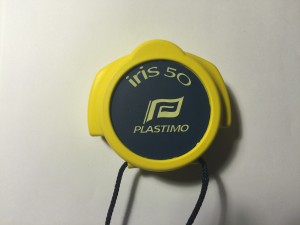 The Plastimo compass has been around for a while as well (although we couldn’t the year) and available form a number of 3rd party retailers as was the W&P compass.

Like its competition it will fit easily in your hand with a yellow non-slip rubber coating with a blue backing that feels secure even when using it in the wet. It does have a different shape and we have yet to determine why they would manufacture it this way. We both think it would fit easier in you hand if it was simply round. So far the unique shape only seems to make it a pain placing it in, and getting it out of the belt holster that we bought as an option. 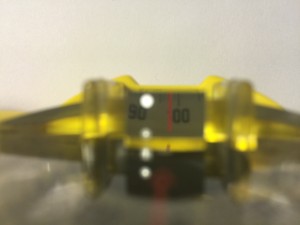 The compass card is graduated in 1 degree increments, and it uses that same kind of prism, although perhaps for copyright reasons, Plastimo says, “a prism projects the reading of the bearing to infinity” as opposed to the “infinity prism” of the W&P.  Just looking down on the top compass, we both find it easier to read since about 200 degrees of the compass card is visible vs the W&P which makes you look through the lens at the 3 o’clock position. 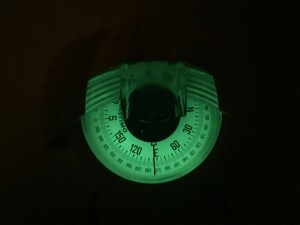 For the same reason, the photo luminescent feature is easier to read than the W&P. Even with more overall card visibility and brightness (or lumens) you will likely be using a secondary light source with this compass when it comes to game time on a pitching deck in bad weather.

We were surprised to see that the Plastimo was actually manufactured in France, but it does only come with a 5 year warranty vs the lifetime of the W&P. This is only for manufacture defects. Neither company will cover you if you misuse the compass. Just because they are called hockey puck compasses does not mean you can hit them with a hockey stick it seems…

The instructions are quite detailed and get fairly involved in helping you use it effectively, versus just the 2 sentences from the W&P instructions. That being said, you are still going to want to know what you’re doing before pulling this out for the first time when you actually need it.

What we found very interesting was that the Plastimo barely floated on its side only, so it won’t be too visible if it ends up in the water, and the W&P actually sank! Now, this was in the sink, and it was a slow descent so it may actually float if in salt water, but it makes you wonder why they would not manufacture either one to be very buoyant and visible if they go over the side. We’ll have to update this the next time we actually get on a boat and try this again in the sea. Regardless, I think a sunglass strap float or camera float would probably be a good idea.

Overall, the choice between the 2 will likely be personal preference. They both cost about the same amount, less the Plastimo holster that is rather useless in our opinion. Others may like it. At the moment, if you combine the shape of the W&P with the appearance of the compass card of the Plastimo, that would be our choice.

In the end, you will need to be less concerned about the toy you are using and more on your ability to navigate with a compass. Both the Weems and Plath and the Plastimo are quite expensive at more than $150. You may be able to find them cheaper on a Amazon or another retailer like West Marine.

Alternately, anyone that has been in the military, cadets, or scouts has likely had their hands on a Silva Compass. They are rugged, weather proof and have been around for decades in various guises. You could probably find one of these online for $20 or less. If you know how to use a compass, and have been exposed to navigation afloat, three is no reason why you couldn’t use this simple device. 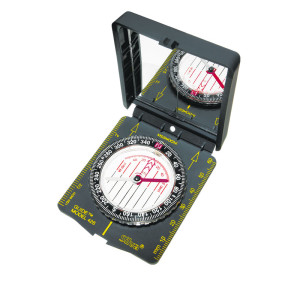 45 Years of Sailing
What's for Lunch?