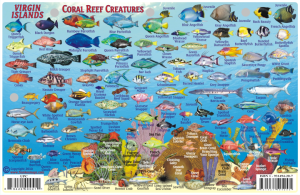 Each time we went snorkeling or diving we would always say afterwards that we wished we had an ID card or book available to help identify the spectacular sea life that we had just seen, especially when we were by ourselves without access to someone that knows the area and it’s wildlife.

As we were discussing our upcoming charter a week before our departure to the US & BVI, Christa said that it would have been great to have a Caribbean or Virgin Island guide to the local critters so we wouldn’t be saying again, “I wish I had.”

As I try to be out of character for a husband and listen to my wife, the next time I was in front of the computer I tried to locate one of these things and see if I could get it here on time. Since we were going to be away for Christmas, we planned to open our (limited) presents the night before we left. I thought it would be nifty if I could have one of these things to give to Christa.

I have been a real fan of Amazon Prime since we started living in the US, so that is the first place I looked. If you are a member, you have access to music, movies, etc BUT

the key for those that like toys is the ability to get something delivered in 2 days…or less in some cases!

The card is plastic and 8.5″ X 5.5″ so a bit smaller than you would expect when it arrives. I think the idea is that it is small enough to take with you on a lanyard when snorkeling or in a pocket of your BCD vest when diving. Some of them will be listed as having holes in them for this purpose, but the one we ordered did not have a hole in it. Since it’s fairly thick plastic you could punch a hole in it anywhere that doesn’t block the info for whatever purpose you would like.

If you do an online search for Franko Maps, you’ll easily find their website http://frankosmaps.com/ and this same Virgin Island Reef Creatures card for the same price as on Amazon. I always like to buy direct form the source, but in this case I had to be the clever gift-giving husband so I went through Amazon Prime so it would arrive on time for our present opening night. Christa was indeed surprised/amazed/thrilled that I was able to find one and get it here only a few days after she mentioned it.

Now that we’re back from the cruise where we did both snorkel and scuba diving, I can honestly say that she…never took it out of her suitcase. The problem was that the boat we were on already had this very card and two other ones from different locations in the Caribbean. So a very useful item, but my clever gift-giving husbandness was greatly diminished.

The boat also had a great book which I have in my Amazon shopping cart “save for later” section. Reef Fish Identification – Florida Caribbean Bahamas Reef Set

. It’s big at 548 pages, and pricy at around $30, so we’re not going to get one until we get our own boat with a bookshelf to put it on. There’s also a travel edition

available that is only 132 pages long which might be more manageable. In any case, it has moved up on our must-have list since it is so comprehensive with such great pictures.

Now to regain some of my clever gift-giving husbandness…