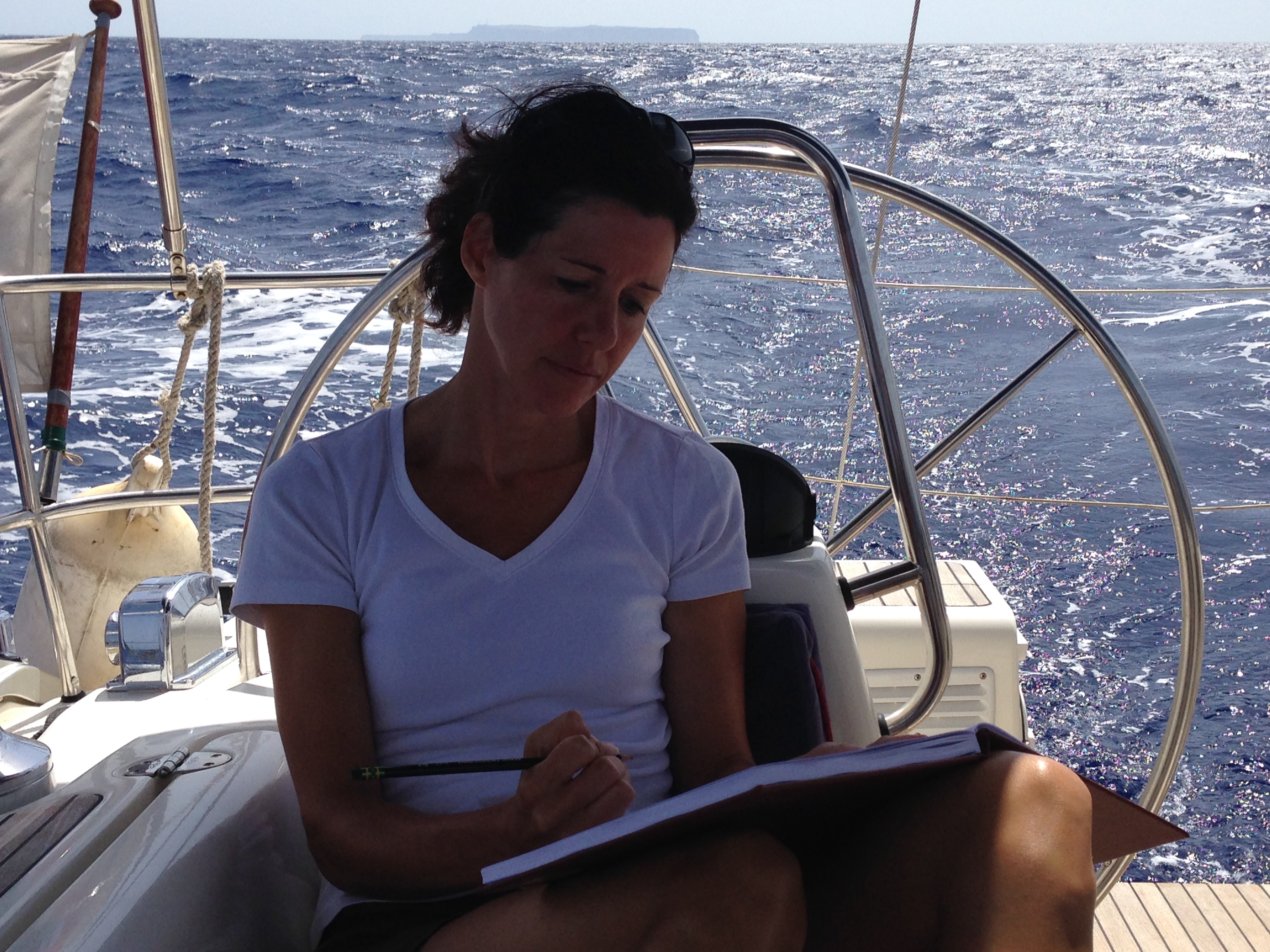 To carry-on from our Day Skipper Sailing course in June, John & I returned to Malta for a five-day practical Coastal Skipper course with Sailing School Malta. Our home for the week was a Bavaria 46 charter named “Chloe”, which we sailed from Malta to Lampedusa, Italy, then to Yasmine Hammamet, Tunisia and return to Malta.

I found sailing on the open water, especially at night, was a completely different experience than doing day sails. My record of the adventure was captured in a personal log along the journey, which I’ll share with you here. This was written as the chronological outline of our journey in point-form style. For a more coherent “story” about my experience, please read the “Passage to Tunisia” blog.

1800 – After enjoying Malta for a couple days, John & I went to meet our crew at Royal Yacht Club, Msida Grand Harbour. While waiting, enjoyed a chat with a local car enthusiast who just happened to cruise by the marina in his beautiful 1964 Cobra replica. (Being former Cobra owners, we were thrilled, and surprised, to encounter one on Malta.)
1830 – Our fellow crew arrived and we did quick introductions: Sylvie Frederic with her adult son, Jeremy, our instructor Stephen Baynham, and his partner Anna Maria Vella. After loading the boat with provisions for 6 days at sea, had dinner at the berth then got underway at 2200. First stop – fuel barge about 500 mt away.
We decided watches for the night would be 2.5 hours each with John & I starting off with him at the helm and me as first mate for the first watch from 2230 until 0100. Had light winds to start and lots of boat traffic as we moved towards the busy commercial harbour.
2245 – Turned our heads to follow the sound of music/partying to discover a cruise ship passing about 500 mt off our stern! Yikes! We each gasped (or perhaps swore) at how close it had come without even realizing it was there! Great lesson on importance of keeping a 360-degree watch.
2300 – Feeling the effects of motion sickness from the boat bobbing in the waves. Not making much way with light winds.
2330 – Lots of tanker traffic in the distance. Watching port side, I notice an uncharacteristically huge wave rolling towards us and in a very calm voice, say “Big wave” to John at the helm. He didn’t hear & asked me to repeat so again I say in a very calm voice, “Big wave” as he looks up to see the 15′ high wave point the bow of our boat skyward. Evidently, a wake from an oil tanker – another lesson learned.

18-Aug-14
0000 – Fed fishes off stern! Not a happy start to our voyage 🙁  At least I was well enough to clean my own mess, using a bucket & sea water. Oh my.
0030 – Passed through bunker fueling area. Many large vessels to avoid, great practice for John at the helm. John not feeling well either.
0100 – Relieved of watch by Sylvie & Jeremy. Still feeling crappy and fed more fishes. Decided to stay up since too ill to go below. Only dozed for 20 mins.
0330 – Stephen & Anna on watch. Anna not feeling well either. Winds picking up now that we’re around the south of Malta.
0530 – Daybreak and last sight of land at southwest corner of Malta as we head off into the Mediterranean. Stayed up all night since too ill to go below and only dozed for about 20 mins.
0600 – Sunrise with Stephen at helm & only me on deck with him. Motoring most of the way, little wind.
1100 – Spot dolphins! A pod swims with our boat for about 5 mins. Very cool.
1500 – Spot a green turtle approx. 1′ diameter shell. Still haven’t slept but feeling better.
1515 – John, Jeremy, Sylvie & I hop in the Med for a swim! Beautiful blue water, approx. 24C. Just as we’re getting out, I get a nasty jellyfish sting! AoOuch! First one ever and it really stings. John takes a pic to post on Facebook. Lots of concern from crew members.
1600 – Sylvie & Anna plan route into Lampedusa Harbour. Anna finds some aloe vera cream to put on my back to help the jellyfish sting – works wonders.
1800 – Another turtle spotting.
1900 – Sylvie skippers us into Porto di Lampedusa with Jeremy at helm, avoiding lots of small fishing boats.
2000 – Arrive at berth and tie-up next to a Lagoon 380 catamaran. Diner of salmon, green beans & couscous – first good food since start of sickness! John, Jeremy, Sylvie & I walk to a local bar. After stopping at 3 restaurants that won’t serve us a drink without a meal, we’re directed towards the bar where we happily find wine & beer.
2200 – Lights out – feels great to crawl into our berth!

19-Aug-14
0720 – Everyone awake. Breakfast onboard. I’m now skipper to Hammamet, Tunisia, our next our port. John walks me through preparing a navigation plan and crew briefing. Used his checklists to guide my prep (ones that he had written prior to leaving Italy).
0900 – Briefed crew and prepped boat for departure.
0920 – Motored out of harbour, avoided fishing boats selling their catch to locals along the pontoon next to us. At mouth of harbour headed 297 to Tunisia under genoa. Good wind – Beaufort scale force 4.
1030 – Passed famous Rabbit Beach, voted best beach in the world last year but seemed rather unremarkable. Stephen wasn’t impressed.
1100 – Raised main sail, now getting 8 knts. Good winds, clear. Stephen shared some knowledge with us: items to note on a boat log; how to use a compass & sun to tell time; and, how to record cloud cover (1-8 octet scale).
1200 – Decided on crew watch for Tuesday night to be 3-hour shifts, starting at 8pm with John & I, then Stephen & Anna, then Jeremy & Sylvie.
Removed Italian courtesy flag at 12 miles off shore from Lampedusa.
1230 – Sylvie lost Tunisia courtesy flag overboard. Circled back but couldn’t locate it.
1300 – Lunch. Winds decreasing, now SW 9 knts.
1600 – Under sail, light winds.
1800 – Saw pod of dolphins swim along bow for about 20 mins. Stephen said they like to see human faces so John & I sat right on bow. One swam next to bow & turned on it’s side so his eye looked directly up at us – incredible moment. In the middle of the Med, no land in sight, just us and the dolphins.
I planned entry to Jasmine Hammemet as skipper. No paper maps available so used Sylvie’s iPad app, iSailor. Drew scale map of marina entrance in logbook and planned waypoints.
2000 – John & I on first watch. Darkness falls. Lots of nesting shearwater birds fly out of the way to avoid the boat.
2300 – Stephen & Anna relieve us.

20-Aug-14
0530 – Time change – I take over helm and steer us into harbour.
0545 – Tie-up along side “Quai d’accueil” – Welcome Quay for Yasmine Hammamet. Amazing to think I just sailed us into north Africa!
0615 – Cleared into customs, visit police, fuel-up and head over to a berth near “Duncan & Kim”, local ex-pats who know Stephen and give us some helpful tips about dealing with the officials. Surprising how little fuel we used with all the motoring we had done.
0730 – Used marina showers & feel oh so much better to have clean hair and fresh clothes.
0900 – Anna, Stephen, John & I head to brunch at local restaurant – great meal of eggs, muffin, french bread, honey, fig jam, butter & tea. Lots of flies to chase away but very friendly waiter.
1000 – John & I wander into local mall where we try not to buy beautiful Persian rugs. Salesman very clever and persistent. Tells us they are made by Berbers, offers us good prices, free good-luck bracelets to entice us to buy. We learned later that if their first customer of the day makes a purchase, it’s a sign of good fortune for the day. Being the early customer gets you a better deal since they don’t want to lose the sale.
When we rejoin Stephen & Anna, she’s already bought a purse & shoes!
1300 – Back at the boat in the marina & decide to go to the beach with Jeremy. John’s finding it too hot to leave the boat & wander.
Jeremy & I swim in the surprisingly filthy water because I just can’t resist getting in the sea now that I’ve finally made it to Africa. As I relax after swimming, Jeremy wakes me from my lounge chair to point out a camel walking by about 10′ away! A man was giving camel rides on the beach! I grab my camera and take a bunch of pictures, then find out it’s only 20 Tunisian Dinar (about 8.50 euro) and decide I have to do it. We head back to the boat to get money & everyone decides to join us. 20 mins later after I find a cash stop that will work for me (using a visa cash advance) we arrive back at the camel. Anna & I get on and she’s soooo excited, it’s hilarious for me and makes it all the more fun. We only stay on the camel about 10 mins and Anna absolutely loved it. A rare experience for sure – not truly uncomfortable but I wouldn’t want to cross the Sahara that way.
While I was at the cash stop, John encountered a man with a falcon who let him hold it on his arm while the others took pics. The man was quite furious when John wouldn’t pay for the stunt.
1900 – Supper on the boat. John is skipper and put me at the helm to motor out of our berth & onto the Welcome Quay to clear out of customs. We waited a long while for Stephen & John to do paperwork and then discovered they wanted to detain us since we didn’t have the charter agreement for the boat. After a lot of smiling and a couple Cuban cigars passed hands, they finally cleared us to leave and we motored out to open water.
2110 – Underway with good winds, 12-14 knts. John & I are first watch until midnight.
2355 – Sylvie & Jeremy relieve us of watch.

22-Aug-14
0700 – Up and light out. Entering Malta area, Comino Channel between islands of Gozo & Malta. Sylvie at helm.
0810 – Anchored in famous Blue Lagoon along the Comino Channel. Had breakfast, Stephen fried eggs for himself & John. Went for a swim under cloudy skies & saw a couple jellyfish. Light winds.
1100 – Motored to St. Paul’s Bay. Jeremy at helm. Dropped anchor. Sunny & warm.  John, Jeremy & I swam over to nearby caves. John saw sea urchins but luckily Jeremy’s footing next to the caves missed the nasty encounter. Sunbathed & relaxed for a couple hours.
1500 – Raised anchor & John skippered back to Msida Harbour, Royal Yacht Club to drop off Sylvie & Jeremy. Tricky winds made for quite a challenge in securing boat to the pontoon, side-to. I tied a bowline to secure the front & almost mucked-it up but finally got it!
1600 – Returned to Kalkara Marina & John did a great job skippering us into berth. Happy to be back on land & have proper shower facilities.
2000 – Dinner at Rowing Club with Stephen & Anna. Slept overnight on boat. Left for airport 0830. 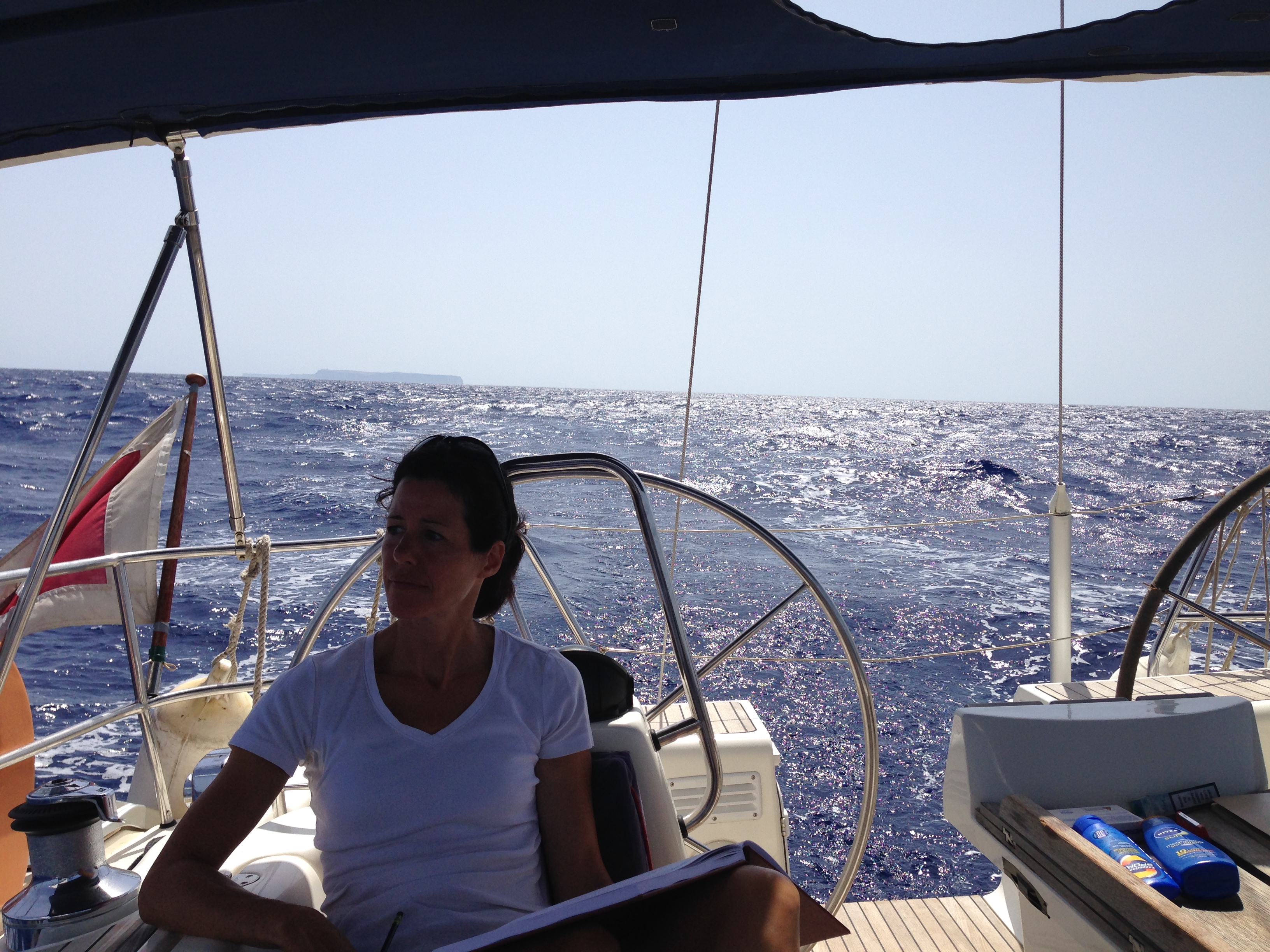 Passage To Tunisia
Passage to Tunisia - The First Night