We flew to Malta the morning before and stayed at the Radisson Blu St. Julians Resort. We had stayed there for 2 days last time on the island and liked it enough to return. Our original plan was to spend 2 days on Malta and head out to sea on Monday morning, but shortly before leaving Naples we learned the skipper, Stephen, of Sailing School Malta had now decided to leave Sunday night. 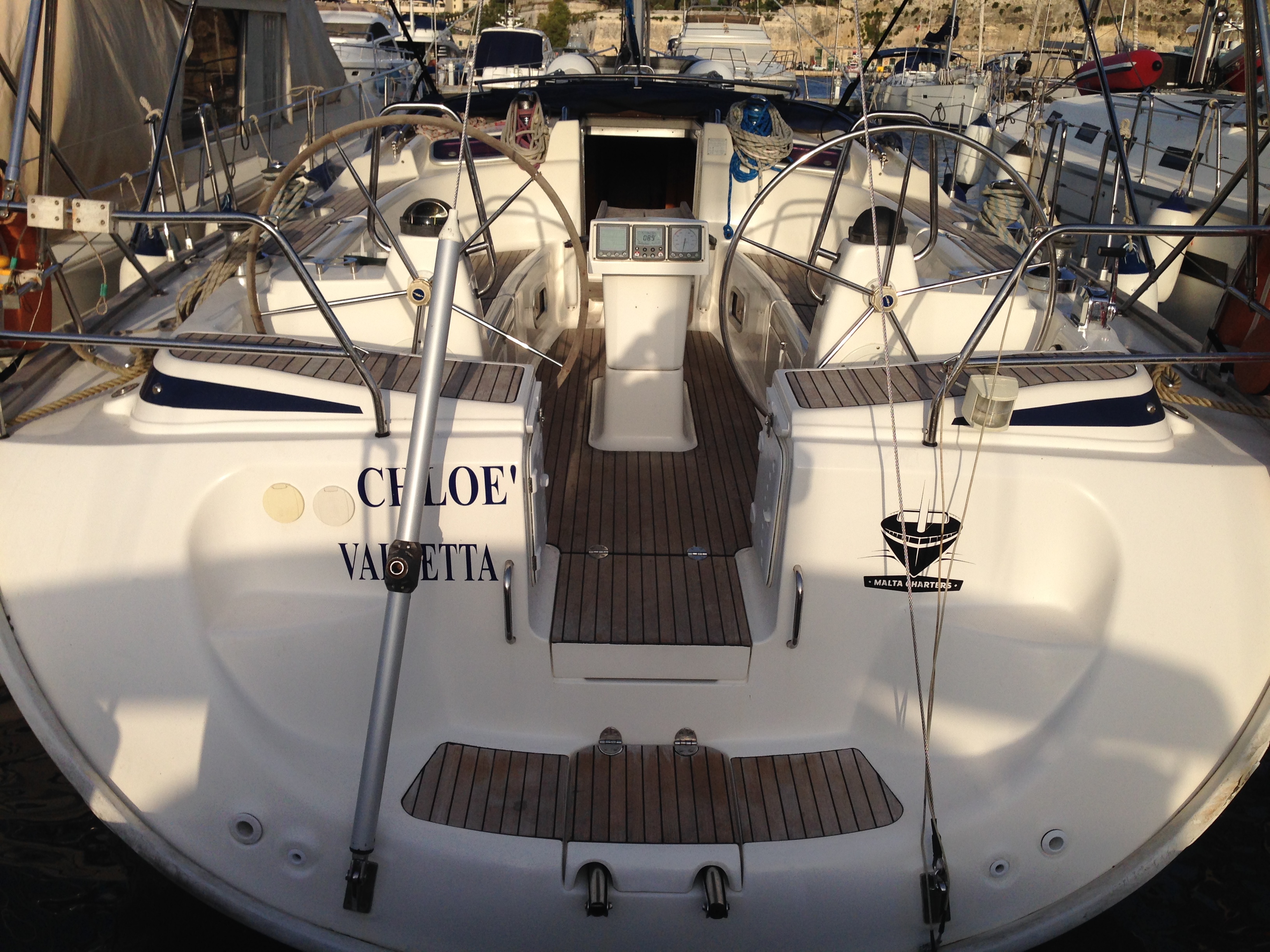 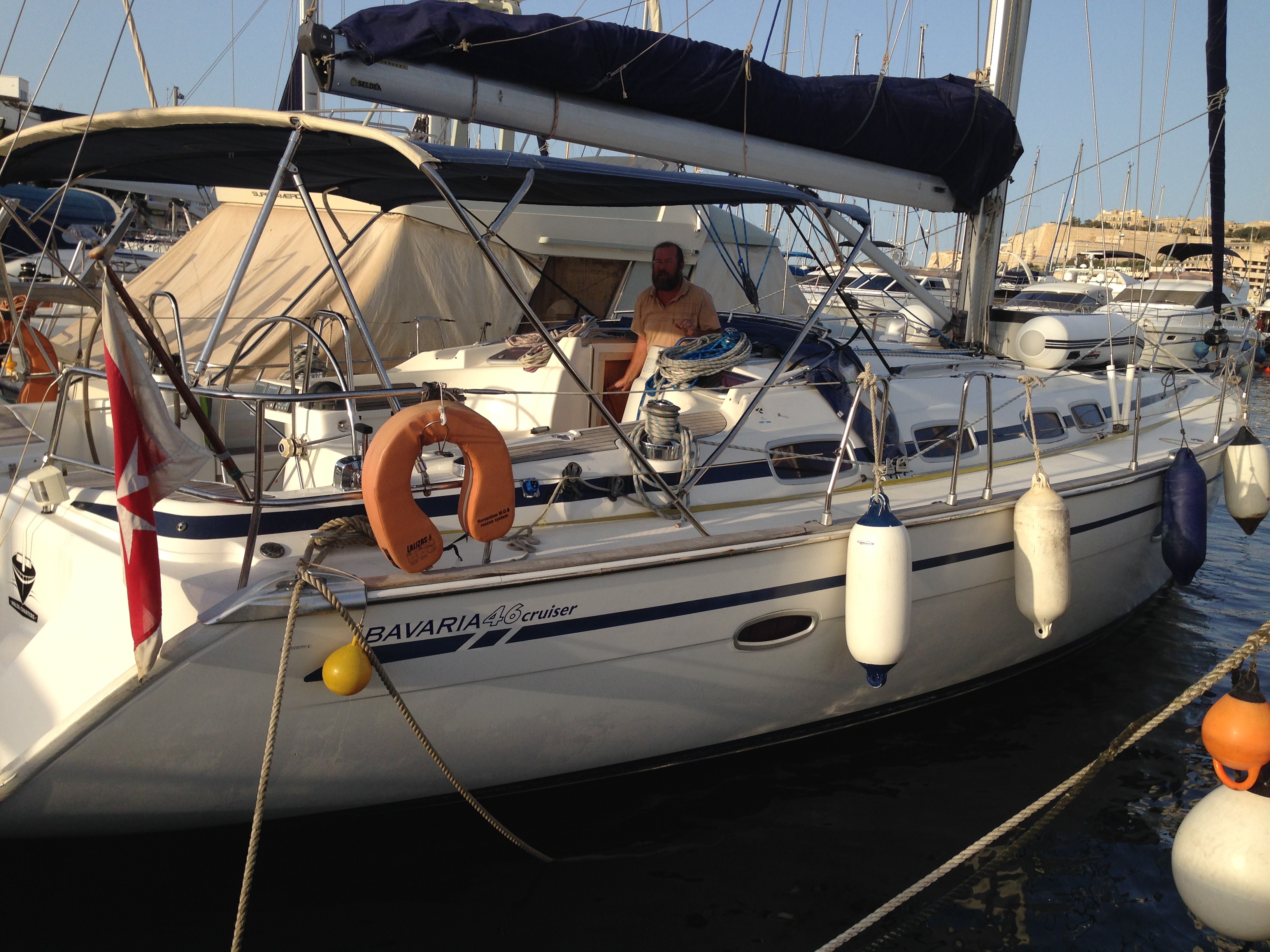 We were sailing in a 2007 Bavaria 46, Chloe, from Malta Yacht Charters with 4 other people. Our last sailing session was on one of their boats as well, a Dufour 365 which was good to learn how to handle, but we thought too small to live aboard for any length of time. Small head, no shower other than a pull out faucet, etc. Chloe has a lot more space, with 2 heads, one of them with a real shower, so we were looking forward to that. Yes…we were already boat snobs, and hadn’t even spent any real time sailing.

We were to meet at the Msida Marina close to the Royal Malta Yacht Club (RYMC) at approx 1800 for dinner and then departure. We took a taxi and arrived at around 1730, and while waiting spotted an AC Cobra, of all things, cruising the marina. Being a (former) Cobra Guy, I stopped him to talk and have a look at his car. I can’t remember his name, but he was a very friendly guy that worked at a boat shop close by as their fibregalss man. He said the Cobra replica was a Gardener-Douglas, which I’m ashamed to say I hadn’t heard of. We learned that insurance and registration on the island are very inexpensive, but the importation is ridiculously high. The previous owner evidently paid €12,000 to import this car. 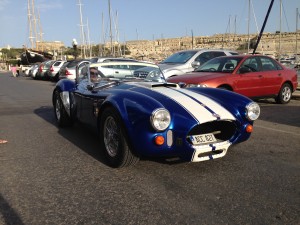 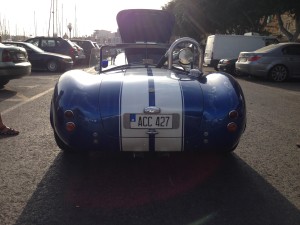 OK, enough of this tangent…but it was a really nice car.

Stephen and Anna had just come back from a day sail with another group and had to run home to get some things. The other two people, Sylvie and her son Jeremy, eventually arrived with groceries and we ate dinner before departure. We never left the fuel tender before 2200, and I was given the helm to sail out of the harbour with Christa as first mate. 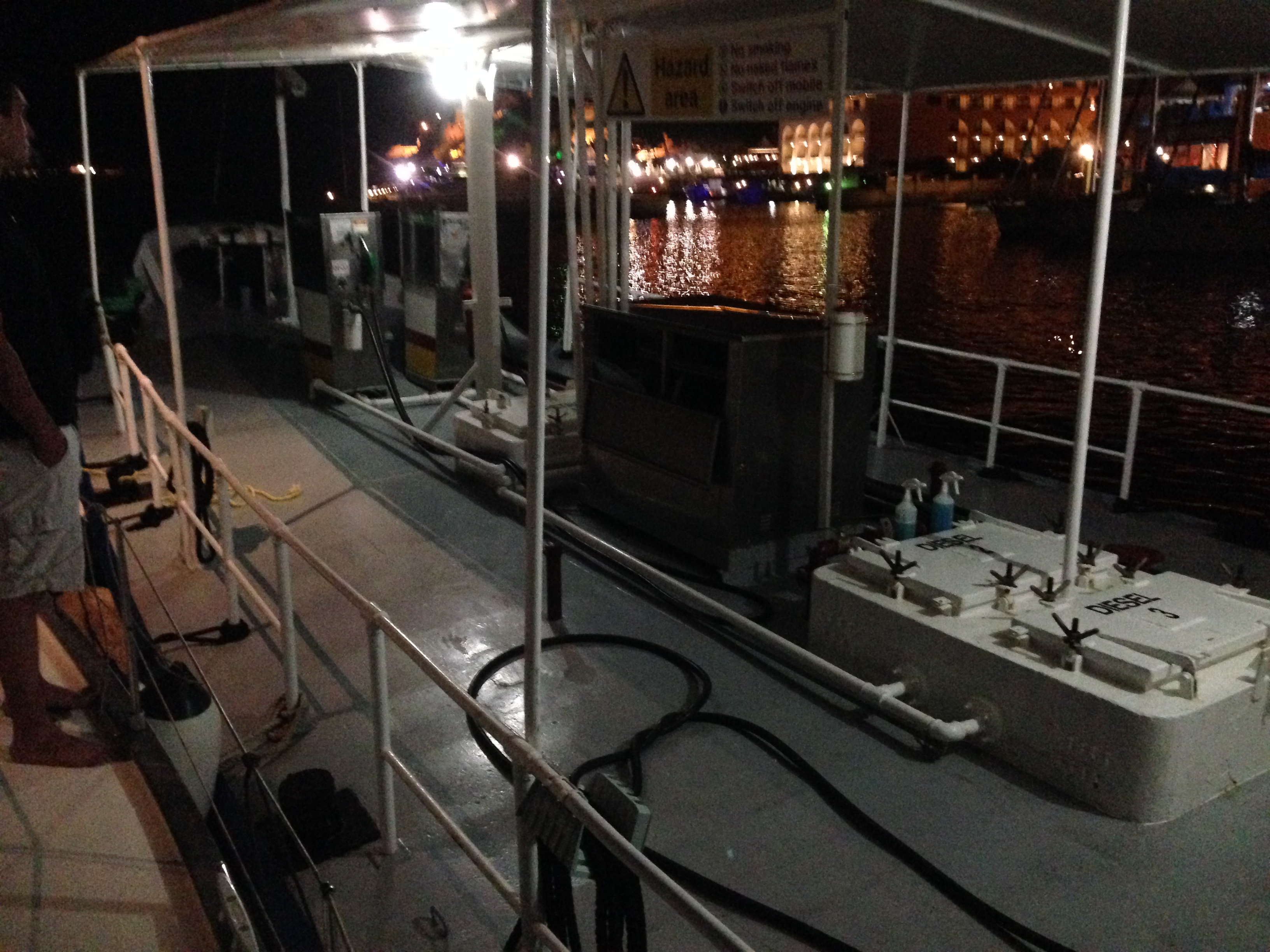 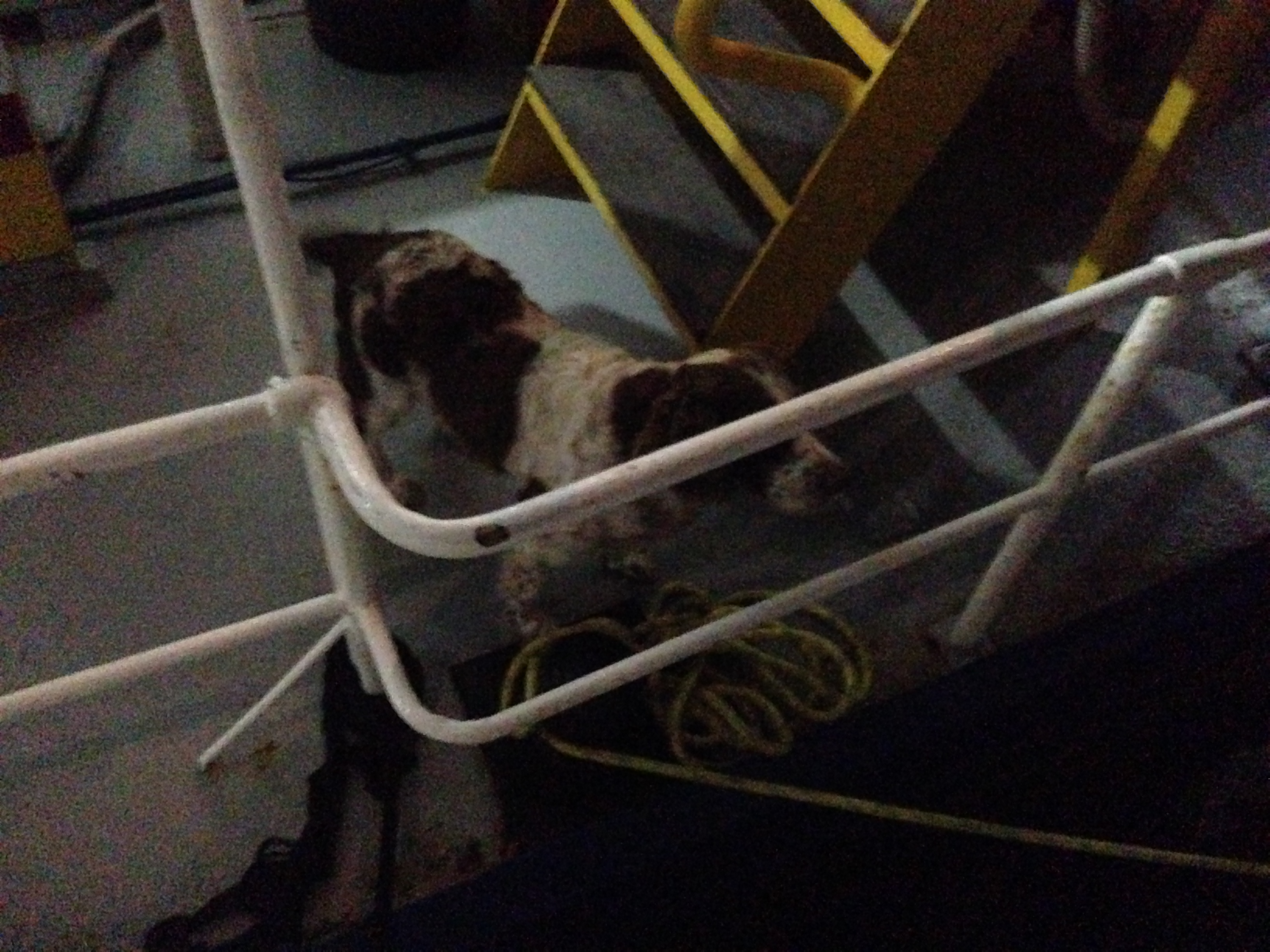 Note the “vicious” guard dog on the fuel barge. He was so eager for attention, he almost fell in the water trying to get to us.

Since we were heading all the way to Yasmine Hammamet in Tunisia, it didn’t really matter that we were already four hours late, but my Spidey-senses were still tingling since we were leaving at night in an unfamiliar area, and we had not been on a boat since our last sailing trip in June, two months previous.

We had just cleared the harbour entrance, and I turned at the fair water buoy. Christa and I were the first watch. (We had decided to do only 2.5 hour watches that first night) Everyone else went below to mill around and try to get some sleep before their own watch. The bars/hotels on shore were now in full swing, and we could hear competing sources of dance music from the well-lit shoreline. As we continued to try and get our bearings and sea-legs, I couldn’t help but notice the sound of music moving to our stern. My brain was telling me that this meant we were turning to port, putting the shoreline behind us, but it was still holding steady on our starboard, and we were tracking steady a couple miles away as we had been.

I then turned around, perhaps remembering when someone reminded me the importance of maintaining 360 degree situational awareness (SA), just in time to notice an enormous ocean liner just starting to pass aft of us, easily inside a mile. Christa obviously could not see the hair on my neck standing straight out, so I said in a calm voice to turn around. For some reason she looked aft and down at the transom, so I took her chin and pointed her in the right direction. By now the ship was taking up probably half the available horizon to our stern, all lit up and music blaring away. I can’t recall what Christa said but it was an appropriate expression of astonishment. Good lesson learned right at the start of the trip, and one that will likely be with me for quite some time. Apologies for the quality of the rolling-sea night shot here, when I finally recovered enough to think to reach for the iPhone. It does not do it justice, believe me. 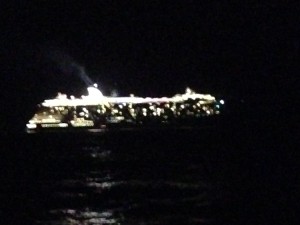 Our course was taking us around the east end of the island where there were a number of commercial fish farms and the major industrial port. The fish farms are marked with a number of special buoys that I planned to use as waypoints to ensure we missed the farms themselves, and some shallow water in the vicinity. When we left Grand Harbour, the winds were approx force 3-4 on the Beaufort Scale, with associated waves. Now around midnight it was approaching a force 5. We had sailed in such conditions in the day, but Christa said she was not feeling well, likely due to the waves approaching 6 feet in some cases, and the fact that she had never been at sea at night before. I had not really either, but I thought my time flying helicopters should temper any potential motion sickness.

I suggested she take some of the Dramamine that we bought for the trip, but she didn’t want to, continuing her tendency to never want to take any medication until it was really too late. We had also brought some ginger cookies, as we read that ginger was supposed to ease the nausea as well. I think she lasted about 3 minutes after eating a couple of the cookies before leaning over the back of the boat to “feed the fish” as she put it. Now, on some boats this would have been effective, but on ours, it has kind of a 2-tier sugar scoop stern, so the so-called “fish food” landed squarely on the lower level. After I sat with her for a bit, I dug out a bucket to fill with sea water to clean up the mess. To her credit, she cleaned her own mess, and then tried to recover from her unwelcome condition. This would prove difficult with the ever increasing seas, and lack of real horizon for her to focus on. I was still OK, likely because I was looking after her, was on watch, and becoming increasingly aware of the looming area of tenders, freighters and other vessels all lit-up and confused against the background of the island.

I was proud of myself for spotting the enormous freighter on the bow, a mile or so away, after the ocean liner had gotten our attention earlier. I have no idea how big it was, but it was moving at a fair clip and very low in the water. If I wasn’t so focussed on Christa and been so out of my element, this description may have meant something to me. I then heard Christa mumble something, so I turned to look at her and asked, “what?” She said in an eerily calm voice what I thought was, “big wave.” I again asked her to repeat, and she again said very calmly, “big wave.” I looked to the bow, and then had to look higher to see the very large, smooth, rolling wave approaching us maybe 20 degrees off our port side. I then, in a surprisingly calm voice, said to hold onto something as the bow smoothly rose and then fell on the backside, with the bow dipping slightly under the water before lurching back up to the surface. I don’t really know how tall it was, but I figure with us standing on the deck, our heads must be close to 10 feet, and we were looking up at this wave as it was approaching. Next lesson learned in quick succession. A very large wake will be created by a heavily laden ship moving so fast. Got it.

This brought everyone up on deck a couple minutes before watch change, so we decided to raise the sails. It took us a fair bit of time as the sail battens kept getting caught in the lazy jacks. I was still at the helm, trying to keep us in the wind to raise the sail, and avoid the large number of ships around us. Some were at anchor or moored, some were moving about, and my adrenaline was still going from the encounter with the wave.

I started to feel sick myself after I handed over the helm, and the requirement to “be on” was no longer there. Christa and I both stayed on deck the rest of the night as going below would have made us worse. She was sick a few more times, and I did everything I could to not follow her lead, likely more out of pride then anything else. As the sun started to rise at maybe 0530, I couldn’t even be bothered to watch it. All I had to really do was open my eyes due to the way I was facing, but I wanted more than anything just to fall asleep and feel some relief.