We subscribe to the blog zerotocruising.com from fellow Canadians Mike and Rebbecca Sweeney.

In today’s newsletter their article was I learned something new already this morning!  It was about a neat video they found on Facebook that shows what happens when you drop a small amount of olive oil on the surface of the water. Very cool/impressive result for such a small amount of oil.

I remembered reading about this in the context of sailing somewhere, so I dug into a few books. 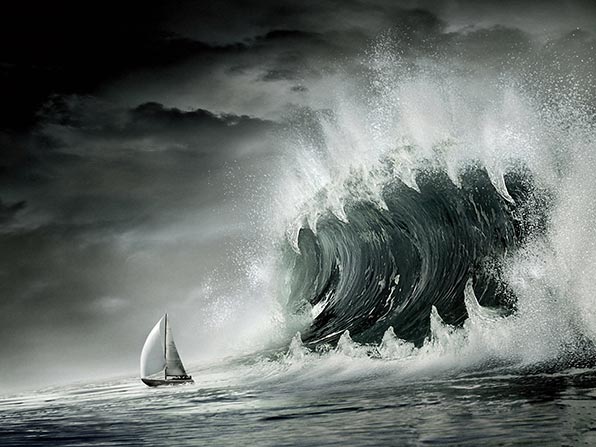 (that’s a great picture they found)

It was Hal Roth that talks about it in his book How to Sail Around the World, pg 296-297. Same basic premise as the FBook piece but adds that the same dampening can occur with other items on the water like debris, seaweed, etc. He says that he thinks he does not carry enough (with 10-12 litres of engine oil) to make a difference, but it may. He was told cod liver oil is best, but he doesn’t want to deal with “the ghastly, smelly substance of [his] childhood.”

Likely only useful when hove-to or lying ahull. He also heard that N. Atlantic fishing boats do this by pumping a little oil through the aft head and it eases the overtaking waves.

Thanks to Mike and Rebbecca for prompting me to do some reading again!