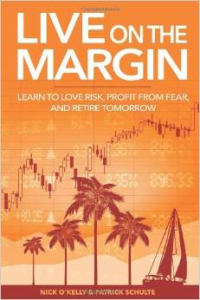 I just finished another book called Live On The Margin by Patrick Schulte and Nick O’Kelly. Patrick has a blog (and book) called Bumfuzzle, and Nick wrote another book which I’m now into called Get Her On Board. They have both done a lot of cruising, with Patrick and his wife quite (in)famous for buying a catamaran and sailing around the world, on their own, learning as they went.

I bought the book since it was written by 2 guys that are quite well known in the scene (you could say my small attempt at altruism/paying it forward) and I was interested to learn how they managed to maintain their cruising lifestyle with mainly passive income. The book is basically about how they earn income through the market, and their strategies on how to stay on the upside and be able to have the freedom to do what you want, versus most of us that are wage slaves with our normal jobs.

My overall impression is that if you are new to the market and/or have not really read about or considered an alternative to working for a boss, this would be a good book for you to read. The market info is there obviously, but it does give you some insight into how we all can take a different perspective on things related to life, and allow a drastic change in lifestyle. I would consider myself an “intermediate amateur” when it comes to investing, and we are already on our way to preparing ourselves for cruising, so I got through the book fairly quickly.

Their strategy relies heavily on options, which I do not bother with as we invest for the most part in long-term blue chips with good dividends that we DRIP (dividend reinvestment plan). We tend to follow the philosophy prescribed by Derek Foster, otherwise known as The Idiot Millionaire. He managed to retire at 34 and hasn’t looked back. There are faster ways to accumulate wealth, but they also tend to be the same ways to lose it faster too. We’re trying to avoid that stress.

No Boys on This Boat
Get Her On Board