Trellis Bay Full Moon Party was a highlight of our BVI visit last year, and fortunately we were able to attend another party this year on Dec 14th. We left Cooper Island early to ensure we could arrive at the mooring field to secure a ball as it always fills up quickly. En route, we enjoyed a nice sail doing 8 kts with 15 kt winds with full jib and main sail at 2nd reef, until all of a sudden I heard a loud bang – the port jib sheet clutch had broke! It was surprising since the clutch wasn’t under a lot of strain as winds weren’t strong. The clutch remained attached but required one of the guys to open it enough to work the sheet out so we could furl the jib. Bummer…it had been such a nice sail. 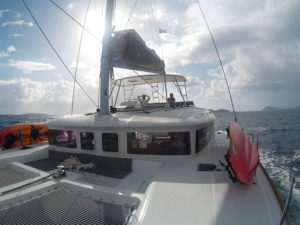 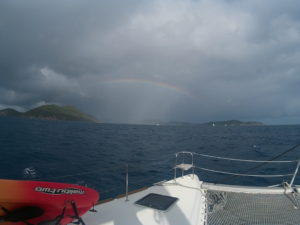 NOVATEK CAMERAWe continued onward to Trellis Bay with only the main sail, arriving about 9:30 am just as a plane is taking off from Beef Island Airport providing a nice airshow. We found there were only a couple mooring balls available – so very glad we came early. After some snug maneuvering we found a good spot, not far from the little island with a bar/restaurant on it called Bellamy Cay in the middle Trellis Bay. 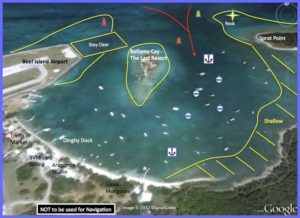 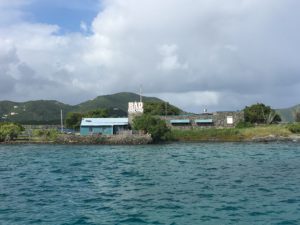 The picture on the left is from the online BVI Cruising Guide. When we arrived the bay was full of boats; perhaps twice as many as are in this picture. John started to proceed in front of the inner ring of moored boats while we look for open balls while not weaving in and out of boats, and it started to get very shallow while he was doing this. The boat has a draft of 4 feet and the depth gauge transducer is supposed to be showing the depth beyond this, so if the gauge shows 8 feet it is really 12 (4′ for the boat + 8 ‘ on the gauge = 12’). As tends to happen when your concentrating, you get distracted. While John was creeping forward with Jeff on the bow a dinghy zipped by going quite fast and shouted “RAIN APPROACHING!” while pointing east. We all looked to see quite a squall bearing down on the bay just as John notice the depth gauge reading 0.4 feet!

He executed a J-turn (or what some may call a Rockford) and held the boat into the wind/rain while we all took cover below, all while the depth showed 2′ below the boat. He then traced our path back out to the entrance to the bay, and we spotted 2-3 balls close to Bellamy Cay. We waved over a big Lagoon 52 to a ball just past us, who was patiently waiting and watching the show. Phew…he earned that first beer after we tied on.

Jeff contacted TMM about the broken clutch and a technician was dispatched. It was fortunate that our location was so easily accessible from Road Town. Plans were made to meet the tech at the dock, and drop off the ladies to do a little shopping while the guys returned to the boat to replace the clutch. Unfortunately things didn’t go well with the clutch repair – the tech had brought the wrong size clutch so he simply removed the broken one and sealed the holes. Another call to TMM and we were advised that we didn’t need a clutch in the first place and to use the winch to secure the sheet.  Hmmm…ok.

We did some snorkeling on the edge of Bellamy Cay, and Jeff got some great video of the sea life.

Onshore at Trellis Bay, we browsed Aragorn Studios which offers an interesting assortment of pottery and eclectic art. We were pleased to see the studio still had a great program to support local homeless cats. Aragorn has also created the famous burning man spheres that are lit at the Full Moon party. It was great to see all this in daylight, as last year we had only come after dark for the party. 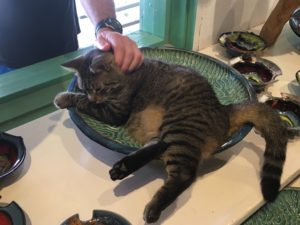 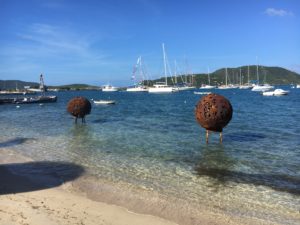 We returned to the boat to cool off with some snorkeling next to the small island and were pleasantly surprised at the amount of fish in such a busy location. Jeff got great video of a dozen squid which appeared in a perfect line, almost as if they rehearsed for the camera!

While waiting for the Full Moon Party to begin, we decided to ferry over to Marina Cay for some famous painkillers at Pussers Bar and watch the sunset. Another glorious sun-downer! 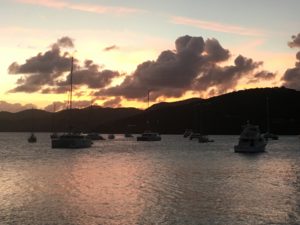 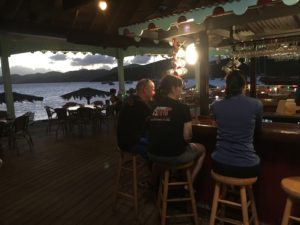 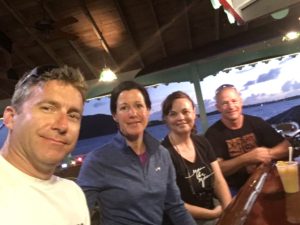 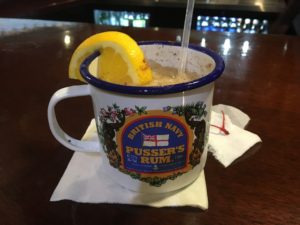 After a long wait for the ferry back to Trellis Bay, we arrived to see the Full Moon Party in full swing to local calypso music, complete with Moko Jumbies dancing on stilts and fireballs. I’ll let the pictures tell the tale… 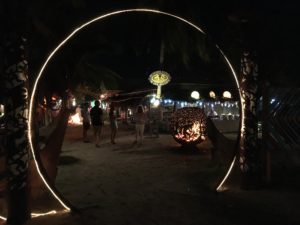 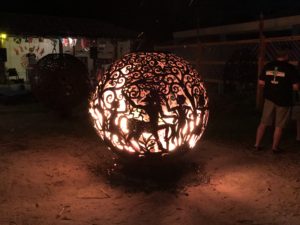 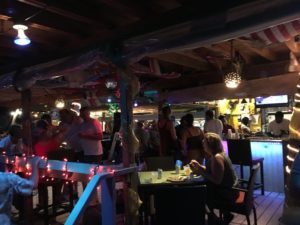 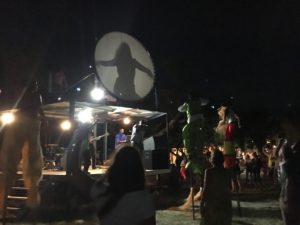 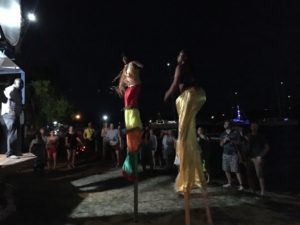 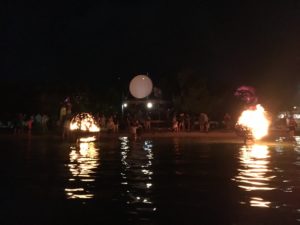 To cap off the evening, we stopped at the bar on the little island next to our mooring, and got into a very competitive game of Giant Jenga. John captured this pic just as I’m about to bring the whole thing crashing down. 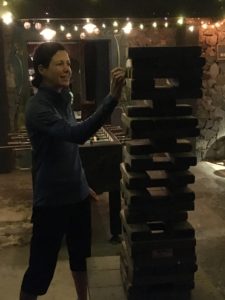 Salt Island and Cooper Island
The Baths on Virgin Gorda