Our most challenging task of the day – figuring out how to use an old-school coffee percolator! The guys were avid coffee drinkers and after being up throughout the night to ensure we were secure while several squalls passed, coffee was all the more critical. Eventually we heard the magic of gravity at work, percolating success! With winds at 30 kts and gusts to 40 during the night, we had hardly noticed the squalls were it not for the wind noise, and were thrilled to have chosen such a large boat with the Lagoon 450. Peggy, who had only experienced a small mono-hull with their MacGregor 26, was particularly amazed at the stability of a catamaran.

We saw a weather window after breakfast and made our way out of The Bight, towards Cooper Island. Once in the channel, about 20 mins into our motor, the rains came again. As we (mostly John) endured several heavy squalls with visibility down to about 1 mile at one point, it became evident that our future boat would need a dodger or some kind of helm weather protection which this boat did not have(!) Being pelted with warm Caribbean rain was nothing compared to what we could experience along the Atlantic coast near Maine, close to where we both grew up. We passed a few coves and anchorages but decided to continue towards our destination. Persistence paid-off, and the skies soon cleared so we could do some sailing.

As noon approached, we were passing Salt Island and thought it was a great spot to anchor for lunch and a snorkel, and we were anxious to try our new full-face snorkel masks. I immediately loved my mask – it fit comfortably, didn’t fog in the slightest and provided great side visibility. In addition to the fish, the mask provided a good view of the underside of the boat, which appeared to have a wire wound around the propeller. The guys re-assured me that although the wire wasn’t pretty, it served a useful purpose to secure the prop.

We arrived at Manchioneel Bay at Cooper Island with enough time to continue our snorkeling fun, this time at Cistern Point. John had bought a fish finder guide last year, and it came in handy as we tried to identify the variety of fish and coral life.

A different type of “marine life” greeted us on shore as we enjoyed a few drinks at Cooper Island Beach Club. Several ladies in mermaid outfits in the midst of a photo shoot, provided great entertainment.  We just had to ask…why, and discovered they were doing shots for a company called thefilthymermaid.com Who knew? We had to agree, it was a perfect location for mermaid pics! 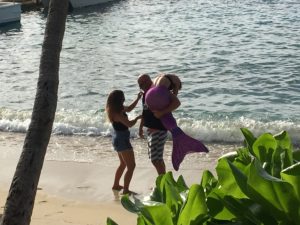 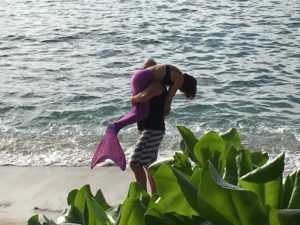 After the boys got over that slight diversion, we headed over to the Cooper Island Beach Club which offers a full service restaurant in addition to a well-stocked bar, coffee shop and lovely boutique. As we waited for our drinks, Peggy & I browsed their nice selection of swimwear, fashion, jewelry, artwork, gifts, toys and other island essentials. They had pretty much anything a girl would need for a perfect island holiday! Jeff and Peggy even bought a swim noodle to play with. 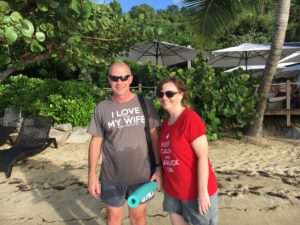 The guys were more impressed however with the bar and great selection of drinks…pretty much anything a boy would need for a perfect island holiday! 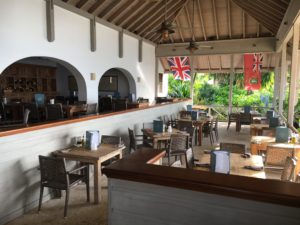 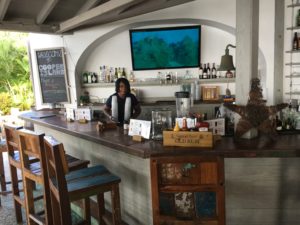 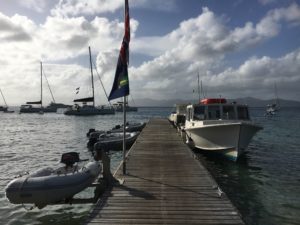 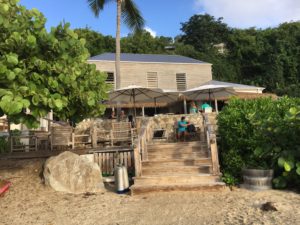 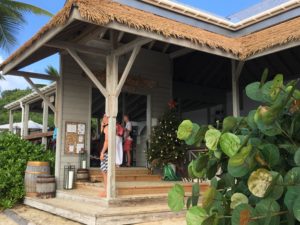 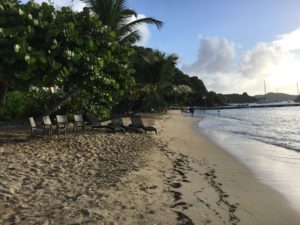 Pictured below is the separate Rum Bar that was just off one of the decks. We had been here last year when our great skipper Diego Vilar treated John to a high-end rum and cigar. We didn’t recall from last year, but they also have their own branded draft beer. (Unfortunately) John continued his taste for expensive rum after our last charter when we got back home and had bought a bottle of Pyrat Cask 1623 a couple of times. The bartender’s face lit up when John asked if they had a bottle, and turned to get it. John asked what that would cost for a glass, and when the answer was $50(!) he quickly changed his order to a glass of the lager. You can see the disappointment on the bartenders face which may have something to do with the fact he now that he realizes he doesn’t actually have a bunch of high-rollers so early in the afternoon. 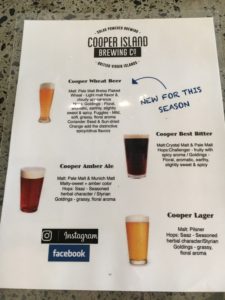 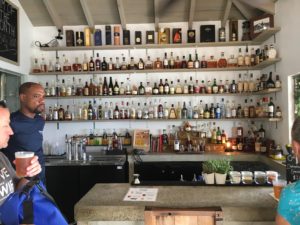