One of the many systems we have on board is something called an Automatic Identification System (AIS). It provides a wireless information network between vessels and/or shore stations transmitted over VHF radio. Anyone using this system can monitor other vessel’s information such as identification, position, course, and speed, and this can be displayed on a discrete display, your existing chart plotter or even your laptop or tablet. Some systems receive only, and other receive and transmit. 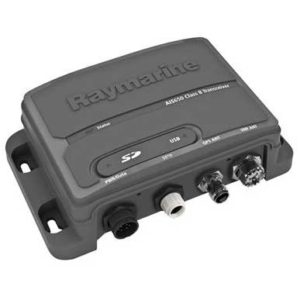 Our particular model is a Raymarine’s AIS 650 transceiver which allows us to transmit our data to other AIS equipped vessels, and receive their data as well. They’re fairly pricey at $800-900 at West Marine or Amazon, so we’re glad it came with the boat.

When we took ownership and re-flagged to a Canadian registration, we had to apply for something called an MMSI, or Maritime Mobile Service Identity. This MMSI is the basis for the ID that follows the vessel through it’s AIS transceiver, so we programmed it into the AIS 650 with some software from the guys at Just Catamarans.

Event though the software said all was OK, we wanted to verify in the real world without bothering another boat to ask them to turn on their system. Someone said an easy way to do so was through an iPhone app called Marine Traffic. There’s an ad-based free version and the ad-free version for $4.99. It’s also available for Android and Windows based hand-helds, but we don’t trust those people… 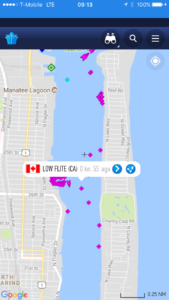 And here we are just outside Rybovich Super Yacht Marina, in Lake Worth close to Palm Beach.

Yet another way for “The Mothers” to keep track of us.