The boat we were most intrigued with was the Maverick 440. We had read about them on various blogs and magazines, but had yet to see one (or the 400) in person. 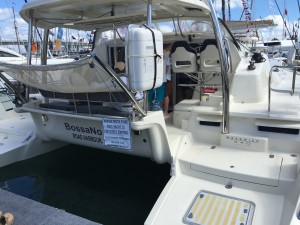 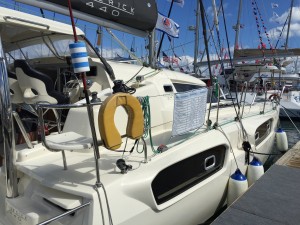 The first thing that you notice approaching it, is that while its obviously a catamaran, the shape is quite different from most of the other factory built boats. The bulging flares on the pontoon, and even though you can’t see them in the picture, there was a very large number of hatches down each side, 4 or 5 in very tight succession if I remember correctly. 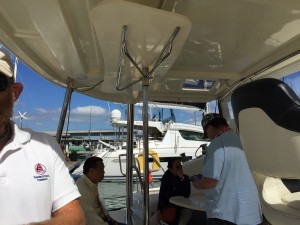 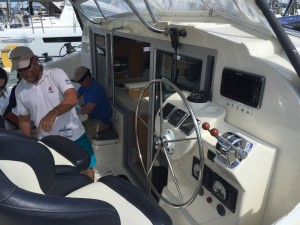 Other “clever” features are evident as you board like the hammock installed on the davits, and that pole you see in the middle of the cockpit is attached to a table. Instead of removing and storing it, they lift it out of the way. Now, I don’t know if I’m sold on the idea since you have a pole in the way, but its obviously less room than the whole table. The helm station also had 2 seats that looked like the belonged in a sports car more than a boat with their side bolsters and thick padding. 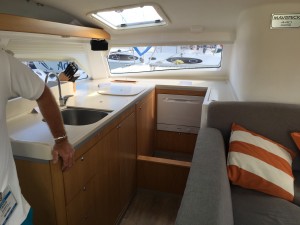 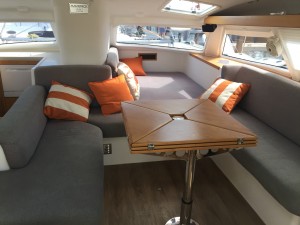 What was really interesting to us was the space once we were inside. They used the area available ahead of a structural bulkhead where other builders simply stop. On the starboard side there is a mattress big enough to sleep 2 adults, and one of the side cushions acts as a backrest for the dinette when not in use. The salesman also sold the feature as a great place to sleep close to the watch keeper. On the port side you can see the bulkhead that you must step over, but then get access to more than 10′ of counter space and enough room for another appliance like the dishwasher they have on this boat. 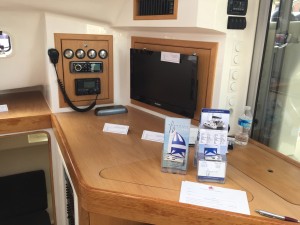 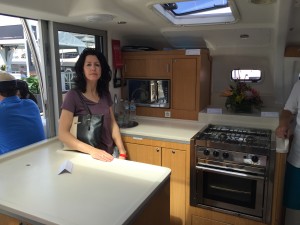 A very big nav station, and lots of room and storage in the galley. Christa is abut 5’7″ for scale. 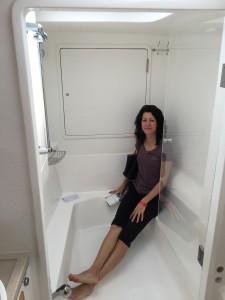 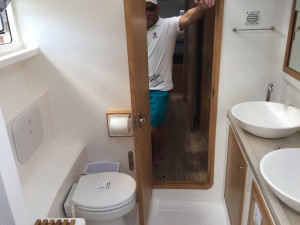 On the owner’s side, there is a frikkin’ full-size tub! It’s not as deep as the one in your house, but you can sit in it with your legs fully extended. His and her’s sink in the boat as well. Of course Christa quickly pointed out that a raised bowl-type sink will be a pain to reach behind to clean, and the seam will give a place for little place for mold & mildew to become fruitful and multiply.

And look, you can even fish from the saloon 😉 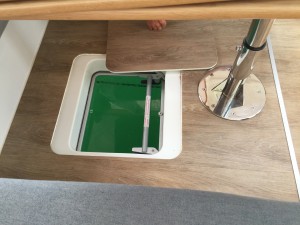 I talked to Rudi (who I think is one of the company owners) at the show. He said their aim was to create the highest volume possible, while still retaining a true ocean-going capability. Obviously we can’t comment on the boat sailing capability compared to others, but with the heavy seas around South Africa, it’s a safe bet that a stout sea-going design would be inherent in the model.

Some numbers were thrown around by various people while we were there. Things like double the internal space and 50% more load-carrying ability than others. 200 mile days as not only possible but easily attainable, etc.

One thing that was quite surprising was when Rudi said after construction, the factory did a 1 month commissioning prior to hand-over to the customer. At that point, the customer gets their orientation during month 2 & 3. We’ve never bought a new sailboat before, but that seems like an enormous commitment by the factory. Add to that the drop in the Rand vs  $US in the past few years and our interest was piqued even further.