One of the first boats we came across after entering the show was the Bali 4.5. We’ve read a lot of the new Bali line, but had never seen one in person.

With our small amount of experience at this point, Christa and I tend to discuss the tension that designs from new boat manufactures seem to have between sailing capabilities and comfort/lounging amenities that are appearing more and more. Obviously catamarans tend towards the latter part of that equation, even though they still can be capable passage making vessels.

Our first impression after walking onto this boat is that the manufacture has made a deliberate leap firmly into the comfort/lounging camp with the Bali 4.5.The first thing you see as you enter is the full size, water dispensing fridge that would look out of place in our house. It was very odd to see such a large fridge-freezer combo on a boat, but at the same time, if you have the space and the available amps, then why not. You will have the obvious downside of spilling all the cold air out each time you open a door, but the target audience likely won’t be concerned about being that energy efficient while floating in the tropics. They probably also have the a/c humming and the ice maker going non-stop. 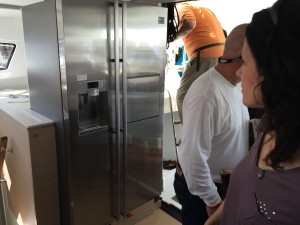 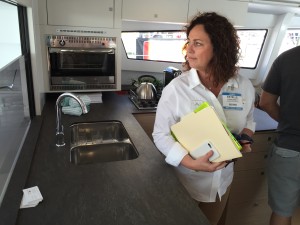 It had a neat little fold-down transom that is currently hiding davits that appear a little more substantial that others we saw around the show. I could find the load rating sticker, so I’m only guessing. 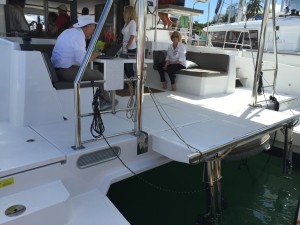 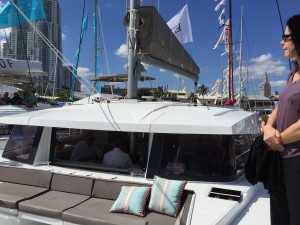 Nice wide “flat” walkways with a bit of a toe-rail molded in. The reason I point out flat is I hated the fact the Lagoon 440 we were on had a molded right angle in the middle of  the walkway which was a pain even on such a large boat. It’s not there any longer on the 450, so it must have been an issue for others. The life-lines are too low for my preference, as they are on most boats. 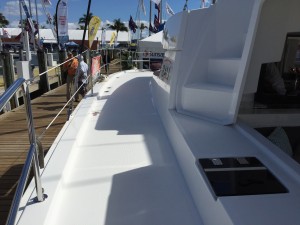 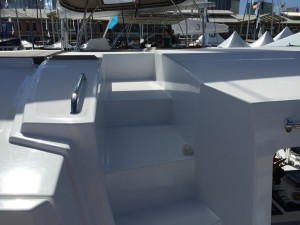 Lots of focus on lounging space up front, and when I lifted the cushions, there was no trampoline but a solid foredeck. I had read that the reason for the move to trampolines in the first place was to reduce weight, but that with modern boat-building techniques and materials that wasn’t really necessary anymore. What was and still is a concern would be to crest a steep wave with a strong wind on the nose and have the solid foredeck potentially cause all kinds of trouble with that huge surface area exposed. I can’t say as I don’t know anything about boats, but with the amenities in the gallery and saloon, the potential clients likely aren’t heading too far out to sea. 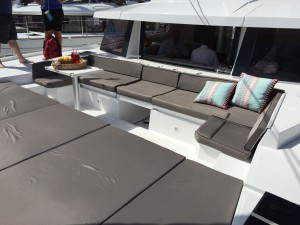 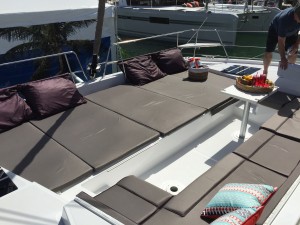 We didn’t really look at the rigging too much, but the boom and lazy bag was easily accessible to Christa. The cockpit seemed minimalist and sparse. The helm station was one that was not really comfortable for either sitting or standing for either of us, but you could likely solve that with some small changes. 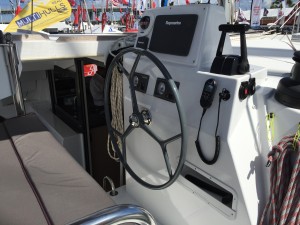 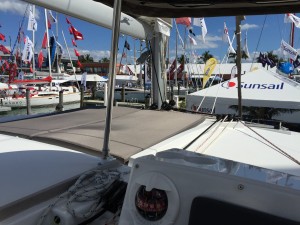 The owner’s suite had a typical layout that we found in most of the other catamarans. Maybe it gave of a little bit more luxurious vibe than the others. The head was where we found it differed the most. It seemed to have quite a bit more space, even with his and her sinks but I managed to cut off one in the picture. While this is what we look for in a house, Christa quickly pointed out that that the fancy bowl-style will create a crevice for mold and mildew to find a happy place. Even when you remember this when cleaning, getting in behind to scrub those ares will be a pain. We were then on the search for a one-piece molded (pun intended) sink design. 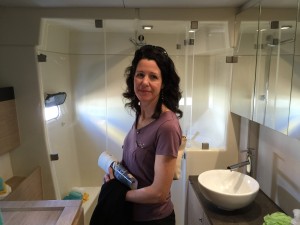 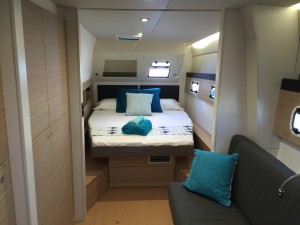 Christ as about 5’7″ to give yo some scale to the surroundings. I’m 5’10” and didn’t hit my head on any bulkheads. I don’t think I managed that all day now that I think of it. 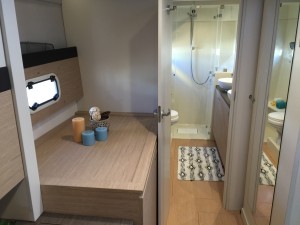 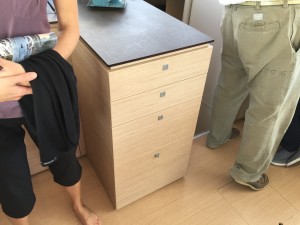 There’s nothing to give you any scale in the picture, but the hulls look to be almost a foot taller that a similar-sized cat like the Leopard 44. When we talked to staff, they said that it was a matter both for space and to get further off the water for a quieter ride. They indicated that you should not experience the common slamming prominent on other catamarans while underway. 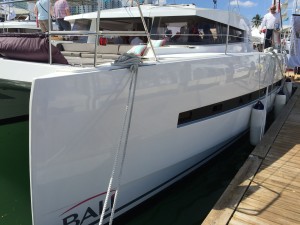 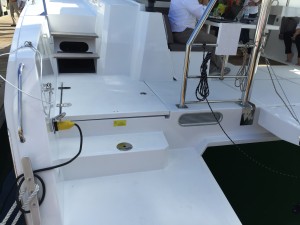 The price/option sheet has not arrived via e-mail yet, so we’ll be sure to post that when it arrives.