As we got up early to leave for Eleuthera, fishing boats were just heading out. This large trawler was towing 3 smaller boats who were part of his fleet, just like a mama and her little ducklings. People in Spanish Wells are known to be industrious fisherman, and claim to make up the bulk of The Bahamian fishing fleet. 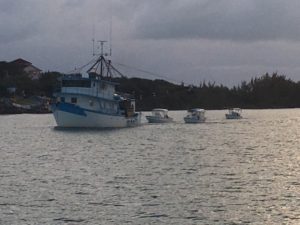 We weren’t really sure where we would end up on Eleuthera due to the many harbours available to us as we headed south, and we wouldn’t know what the conditions were like on that side of the island until we got there. We needed to get an early start to time our trip through Current Cut when the tide would be slack. Along the Bahamas Islands, changing tides create significant currents, especially in areas such as Current Cut where large amounts of water flow into and out of the many shallow banks through a narrow opening between islands and shallows. Currents in this particular gap can be over 4 knots and strong enough to create dangerous conditions that can overwhelm small boats.

We had passed through Current Cut in early January with the tide and had no issues at all. At that time with the outgoing tide, we did over 11.5 knots which about 4 kts more than normal. This morning, we weren’t going to be so lucky!

The tide charts we referenced were off by a couple hours so the tide had already turned. When we arrived, two other trawlers were also travelling through so we were happy for them to go first so we could watch the show. As they entered, one radioed to us that the current was about 4 kts against them which we felt would be reasonable. With our two engines at 2000 rpm, we could normally do about 7 kts so with a 4 kt opposing current, we would have to push the engines harder then we normally would. John was at the helm, and said that since there was a wide mouth entering the cut we had all kinds of time to turn around if we didn’t like the conditions. He said that if our speed got below 4kts, we’d just anchor off to the side and wait until the tide slacked once more.

We entered the current, still well back from the narrow cut, and our speed immediately fell to 4kts. As the cut would get smaller in short order, that would force the same amount of water to travel even faster, so John again changed his plan. He kind of smiled and said, “OK, if our speed gets below 3kts we’ll turn around,” and we continued through. I think he only used maybe 25-2600 rpm and we slowed to 3.2kts at the tightest point. The engines are good for about 3000 rpm, but after I fouled one of the props, we’re nervous about pushing that sail drive too hard until we get a pro to look at it. Losing one through here would have been…interesting. Oh my! It’s certainly stressful yet somehow exhilarating to know we’ve made it through.

The pictures don’t really convey how much swirl we experienced in the Cut, but in comparison it was almost flat calm on the entrance side. 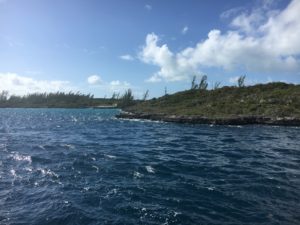 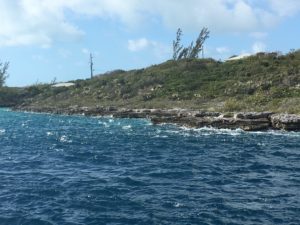 After leaving the cut, we continued straight and paid careful attention to the depths as the water got shallow. We managed fine with our 4′ draft and were soon out in the deeper water. The wind and waves were travelling in different directions so it wasn’t a very comfortable sail. We decided to motor as close to the windward (east) shore as possible and then try to sail south on the beam in what should then be calmer seas.

We ended up doing a combination of motoring and sailing and got as far as Alabaster Bay which we read had a very nice long sandy beach, and very few visitors, perhaps due to a reputation of poor anchor holding. Looking at the charts, it seemed that the closer you got to shore, the better the holding would get. Again our shallow draft allowed us to get very close compared to a comparable sized monohull. We anchored just off Cocodimama resort, with time to head to shore and do a bit of exploring before sunset. It was however, one of the few times we needed to try more than once to get a good anchor hold. The beach area looked inviting, stretching nearly a mile along the bay. 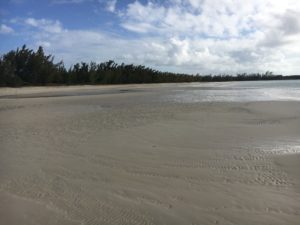 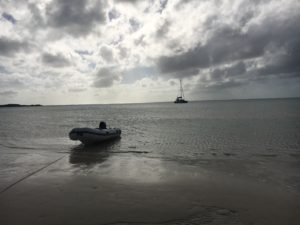 On the south east edge of Alabaster Bay, perched on top of the bank we also spotted a love seat under a canopy overlooking the bay. We couldn’t figure out exactly what would be worth watching from that angle since it was facing the wrong way for the sunset. There was a line stretching out in the water, and a buoy about 20m out from the rock face. Strange. 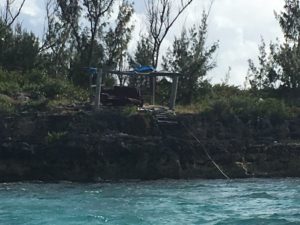 I had read about US Navy base ruins that were in the area and we decided to go exploring. From the beach area, we crossed the road and walked north from the resort. We came across this building but didn’t continue to find other evidence of an old base. It turns out that the entrance to the base was a couple miles further down the road. You can still find information on it through the US Navy Integrated Undersea Surveillance System (IUSS) website. We later found a YouTube video shot on the base by some fellow cruisers, and another blog with a good description and some great pictures. There is even some home video footage on YouTube. We’ll have to be a bit more ambitious and actually find it next time we’re there. 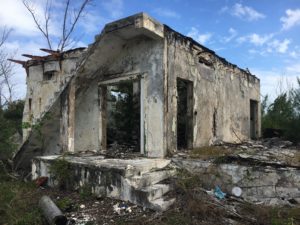 We crossed the road to walk back along the beach. It was evident there had once been other significant operations along the same beach. Abandoned kayaks, water toys, and remnants of old boats and other debris lined the beach near the treeline. Here’s what’s left of an outboard, which doesn’t appear to be very old. We have encountered a lot of places like this that seem to have note recovered from the last hurricane season. 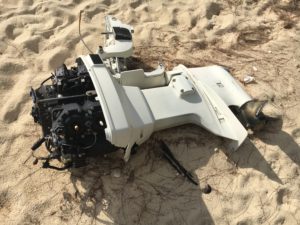 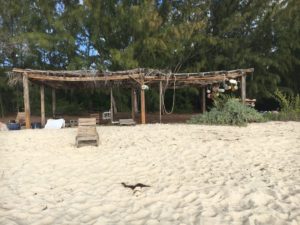 As we passed by the Cocodimama resort we wandered in to take a look since we heard they had a restaurant. The host greeted us and advised that the restaurant was only available to resort guests. The entire resort must be reserved for accommodations which provides guests with a very exclusive vacation.

We made our way to the beach and back out to the boat in time to watch a beautiful sunset, and get ready for our passage farther south to Rock Sound the next day. 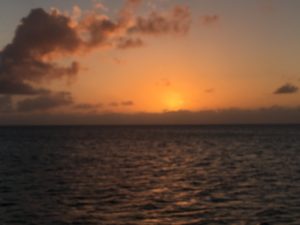