After the beautiful Exumas we continued north to Spanish Wells for a couple days to stock up on some provisions and wait for good weather to head to Eleuthera. During our first visit to Spanish Wells in early January, we stopped only long enough for lunch and to buy a few groceries, so this time we really wanted to do some exploring. Because it’s such a small area, the best way for travelling is by golf cart, and for $10/hr it’s a pretty convenient way to go. The town of Spanish Wells covers the tiny island of St. Georges Cay and spills over onto Russell Island by way of a small bridge.

Many people who settled Spanish Wells were Loyalists who remained loyal to the British Crown and fled the United States during the American Revolutionary War. This was interesting for us to learn since our home province in eastern Canada was also settled by many loyalists.

We tied up to the same convenient dinghy dock, right in front of Pinder’s Market, and as we headed to the golf cart rental shop, we were distracted by the mail boat/ferry arriving from Nassau. It was quite a big one compared to others we had seen farther down the Bahamas chain. 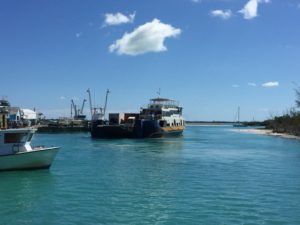 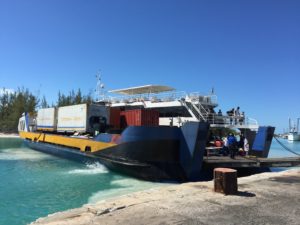 It was interesting to watch the crew expertly manoeuvre up the narrow channel to the dock, only briefly “nudging” a fishing boat out of the way as it passed. Just a small scrape! That’ll buff out I’m sure… 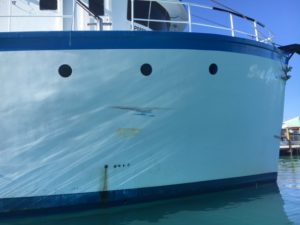 We had read about a nice restaurant along the waterfront called The Shipyard, on the east end of the island and headed there for lunch. This bird was also looking for some lunch but I think he had better luck than us. 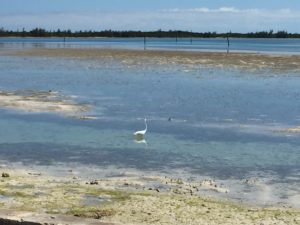 We discovered the restaurant wasn’t open that day, so we had to circle back to the main street for lunch at the Anchor Snack Bar where we had eaten on our last visit. The friendly waitress said they were just about to close but we still had time to order…and it was delicious:  grouper fish fingers and fried plantain.

With full bellies, we hopped back in our golf cart to really do some exploring. We continued in a counter-clockwise route around the north side of the island and passed by the oldest house in Spanish Wells, currently owned by the Pinder family, a common name throughout the Bahamas. 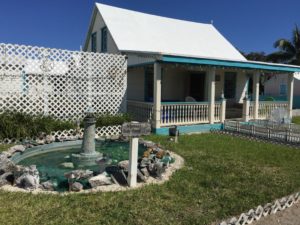 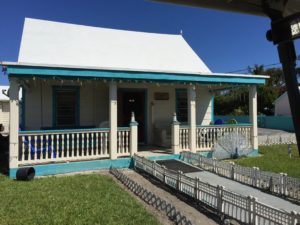 Our next interesting stop was at this nice beach area that dries out during low tides. Some people were enjoying a stroll quite far offshore. With the number of picnic tables and bbq pits, it was evident this area was well-used. 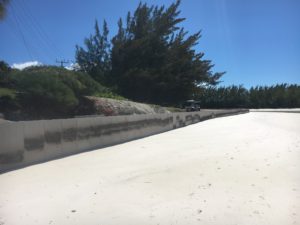 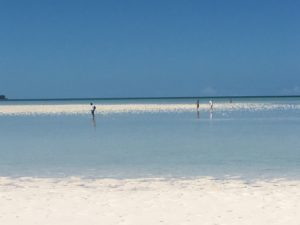 Nearby we saw the bridge to take us over to Russell Island. Along the route we saw several signs advertising The Sandbar, a beachfront bar & restaurant and decided to check it out. The views were spectacular! They even provided a couple cabanas near the water, complete with hammocks! 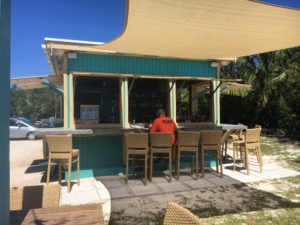 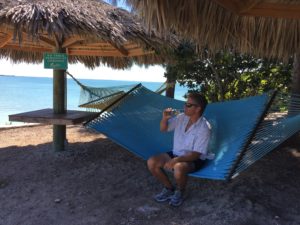 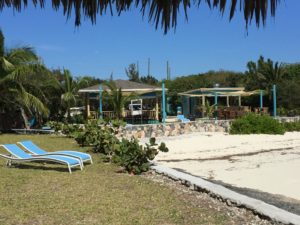 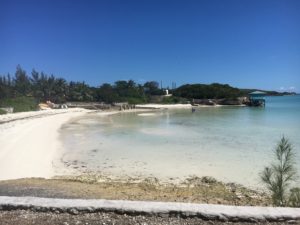 Russell Island is less populated than Spanish Wells, with properties spaced further apart and even a few farms and orchards along the way. These goats looked like they were used to people stopping when we passed by, as they climbed the fence to peek over for treats. We had seen wild goats in the morning from our boat, wandering along the shore line. It was a bit surprising to see these ones so securely fenced. A mom was even feeding some kid goats under the tree. 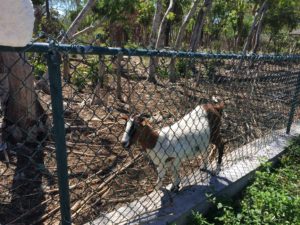 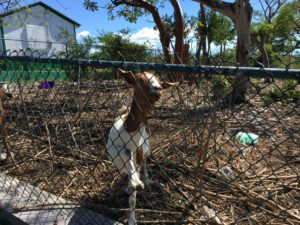 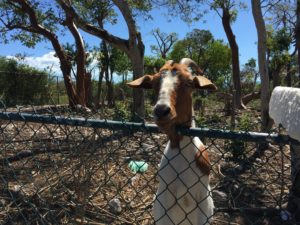 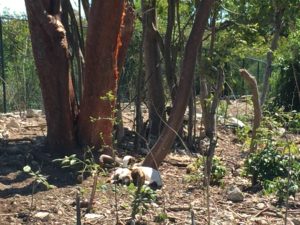 The south side of  Russell Island overlooked the anchorage so we stopped to take a couple pictures of Low Flite. It was a beautiful calm day with hardly any ripples on the water. 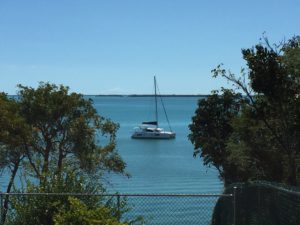 As we arrived back in Spanish Wells, we passed by this unusual display of license plates with one all the way from Alberta. It was guarded by this creepy-eyed ceramic cat. We never really figured out what this represented. 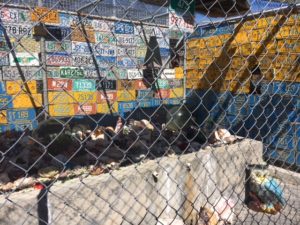 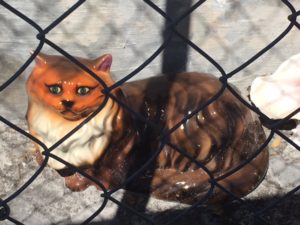 I think we had ventured down all the little side roads we came across and were getting hungry again, so this time we stopped at Wreckers, a popular dockside bar to the west of the downtown area. They had flatbread on the menu and we couldn’t resist as it had been a long time since we had eaten any pizza. Yummy! 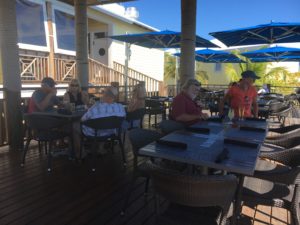 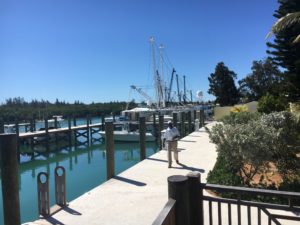 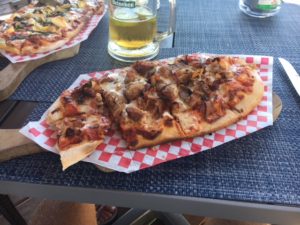 We took advantage of the golf cart to get groceries, to save us carrying them the whole way back to the dinghy. The grocery store at Spanish Wells is very well stocked and prices are reasonable for Bahamas. We were amazed at the size of avocadoes, and surprised to see flour from Canada. 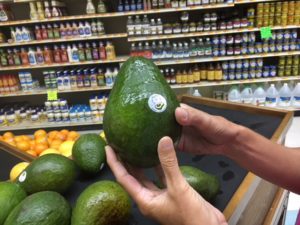 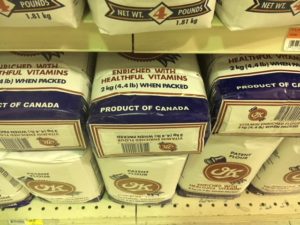 After groceries, we stopped at the local liquor store. While John was inside, I chatted with a gentleman named Chris Forsyth who ran the local radio station, and told me he had just finished building this ultralight plane that was parked right out front. 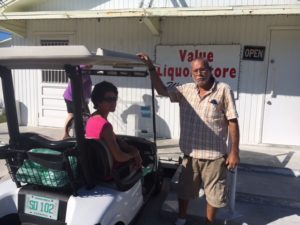 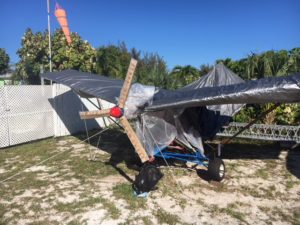 Chris was an interesting fellow, in his late 60’s, who’s father had been a pilot so he too, always wanted to fly. He was an electronics technician which helped him get into radio. Because he grew up around small planes, he explained he wasn’t afraid to fly an ultralight. His plane had a little Rotax engine that anyone from Canada would be familiar with due to their association with Bombardier. He was fitting it with special tires that would let him land and take off form the beach. He said it only needed about 150 feet!

We could have chatted with Chris for a lot longer but unfortunately our groceries would have got ruined in the hot sun. We returned the golf cart and got our provisions back to the boat in time to enjoy a beautiful sunset looking towards Egg Island. 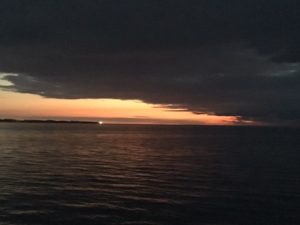 WiFi and Lizards in the Exumas
On To Alabaster Bay - Eleuthera