As we headed north from Exuma Cays Land and Sea Park, our next stop was Normans Cay where notorious drug smuggler, Carlos Lehder, built an ambitious operation in the early 1980’s. Today the small island is home to a nice restaurant with rental cottages, an airstrip which supports tourists for nearby Wax Cay Resort, and a pretty substantial marina under development. We heard they will be able to accommodate boats with up to a 16′ draft once complete. 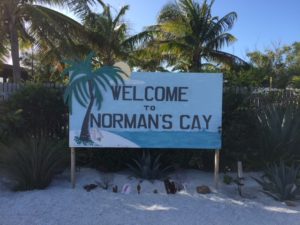 We were really impressed with the beautiful gardens at McDuff’s Bar & Grill. OK…if I’m honest John’s excitement probably had a lot more to do with the crazy-fast free WiFi as his apps needed updating and were starting to get buggy. It was faster than out internet in Ottawa, Ontario. Over the last few days throughout the whole Exuma Cays Land & Sea Park, there was no consistent cell data, nor WiFi available. We have heard some people had resorted to climbing their mats with their cell phones, but we weren’t that ambitious.

We stopped in just after lunch so only sampled a beer, but they had a great vibe with lots of comfy seating both inside and out. We’d love to try their dinner menu on our next visit. “Trevor” was the friendly host and told us there were no guests staying in the cottages at that time so we could feel free to wander the property. 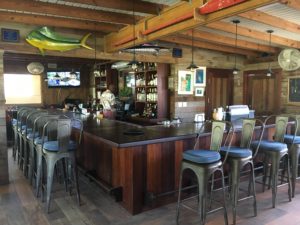 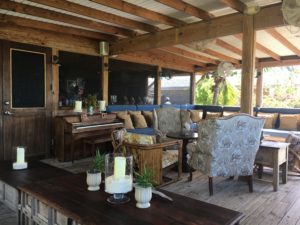 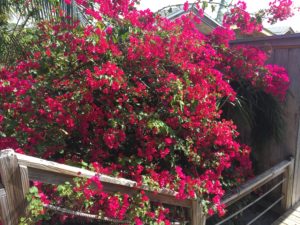 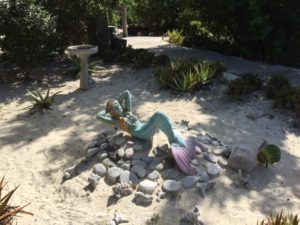 A cold beer and free hi-speed WiFi – John was in his happy place! 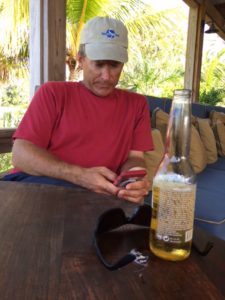 The host, Trevor, explained that the previous owners had a Scottish terrier, called McDuff and that’s where the business name originated. They even had a terrier carved on their sign. 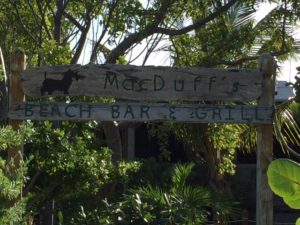 We headed back to our boat and enjoyed a quiet afternoon until we heard the rumble of a diesel engine. Since the anchorage area was pretty empty, we were surprised to look out our window and see this Pershing 72 approaching, and getting closer, and closer, and closer still. He then proceeded to stop between us and another sailboat about 300′ away. He may have been 150′ to our starboard (right) side. Oh my! Safe anchoring distance should have been at least three times that amount to account for swinging room with shifting winds. Anchoring is a spectator sport at the best of times, so we watched this boat with what John would call “morbid curiosity.”

We watched them drop…maybe 40′ of chain, as the windlass was only going for a few seconds, so they may have had a 4:1 scope at most with a single point roller. We always use at least 7:1, plus a bridle to control the yaw. The winds were quite strong and gusty, so they immediately started yawing almost 90 degrees in both directions. Note the orientation of the little sailboat to them in the same winds. Did I mention they are 72′ long and only about 150′ from either boat?

Luckily our new neighbour got on his jetski and came by to ask if they were too close. John had a very polite conversation with him, pointing out that it was a large bay and there was lots of room so having more distance between the boats would be a really good idea. Thankfully they soon moved to re-anchor behind us, a much safer distance of a few boat lengths away. In the end, that gave them a good glamour shot 😛 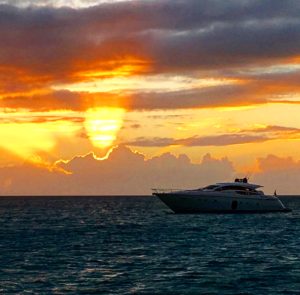 We again had windy conditions so it was difficult for snorkeling with large swells, however John couldn’t resist checking out this plane wreck off the southeast corner of Normans Cay. It was a C-46 Commando whose outline is visible in the shallow depths and the fuselage sticks out of the water at low tide.  This plane was wrecked during the time of Carlos Ledher’s smuggling operations, apparently during a routine approach when the pilot was landing to pick up a load of drugs for distribution. Legend has it that Ledher was watching the approach and immediately after the crash, calmly turned to his staff and said, “Buy another one”. There is another explanation, with a bit more backstory on a great Out Islands website here. 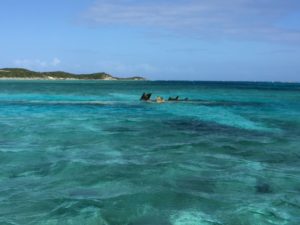 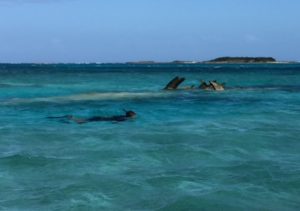 The conditions that day weren’t great for a snorkel, let alone trying to get any worthwhile video. It was 20-25kts against an outgoing tide, which created a strong current that caught John off guard as he realized he was drifting away from the boat. He was also surprised at the aggressive Sergeant Major fish that “greeted” him. They were obviously used to getting food from snorkelers. I stayed in the dinghy to ensure that it didn’t get away from us in the rough conditions.

Next on our itinerary was a visit to see the iguanas at Allens Cay. There are three little Cays that make up this area:  Leaf, South Allens and Allens, but all three are commonly referred to as Allens. As we entered the anchorage, a float plane was at the beach with tourists spilling out to see the iguanas. As we got closer I noticed that many of them appeared to be young ladies…and just then they were taking off their bikini tops! What are the odds? We show up just as they’re doing a topless photo shoot. Too funny! John’s Facebook friends were really dismayed that his iPhone doesn’t have a proper telephoto lens, and I was happy to note that his photos focused on the plane rather than the ladies. 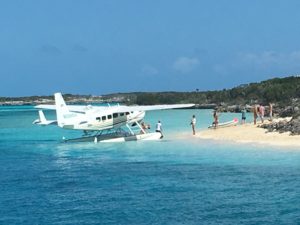 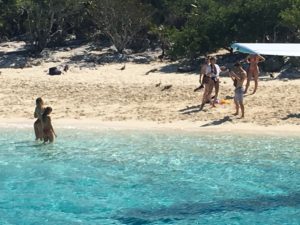 The channel between Leaf Cay and Allens Cay was fairly narrow so it was a challenge to position ourselves far enough from the other boats yet not too close to the lee shore or the shallow areas of the channel. After our third (!) attempt at anchoring, we felt secure and comfortable with our distance from the neighbours and got the dinghy ready to go ashore and visit iguanas. We were close enough to this catamaran that John yelled over the ensure we weren’t on top of their anchor, in case they were getting ready to leave. The guy sitting on the hardtop couldn’t be bothered, as he was too busy looking through his binoculars at the topless photo shoot on the beach. 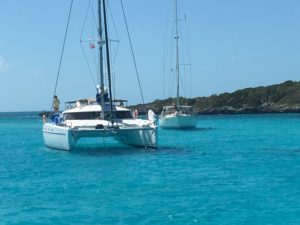 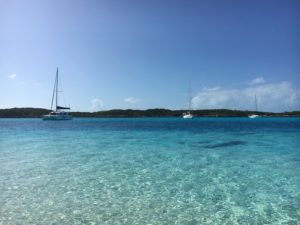 We were about 1 boat length from being on top of this boats anchor. John went over to talk to them about it, and they were happy with the conditions. Since they had 2 anchors out in a Bahamian Mooring, they weren’t going to move too far. 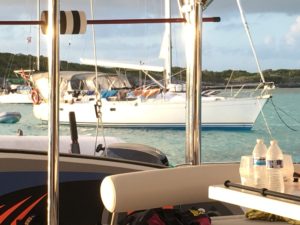 These Northern Bahamian rock iguanas are numerous on the Cays and have been an attraction for many years. Cruisers regularly stop to visit and feed them, so they are quite used to humans and come running towards the water when they hear a dinghy approach, looking for food. 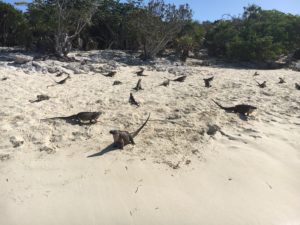 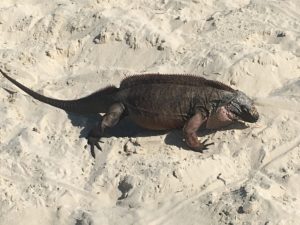 I got close enough so John could take a picture for some scale. They range in size from a few inches to about as big as a small dog…and they’re not cute! About a dozen were waiting on the beach and once we stepped foot on shore another 20 came running towards us, looking for treats. 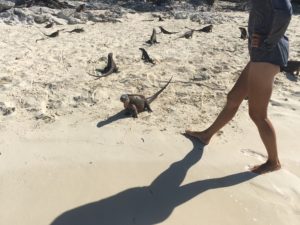 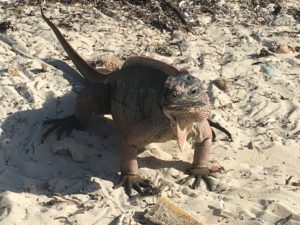 After hanging with the iguanas, they quickly got bored with us since we didn’t have anything yummy to feed them. Another couple told us about some nearby ruins that were worth checking out. 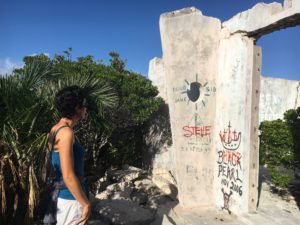 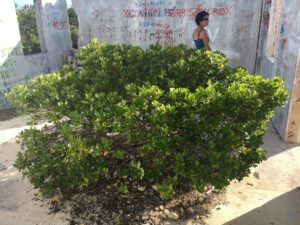 A can of white paint had been left behind, along with a very stiff paintbrush, so John left our signature on the walls. On our next trip to the Cays in future years, it will be interesting to see if it’s still visible. 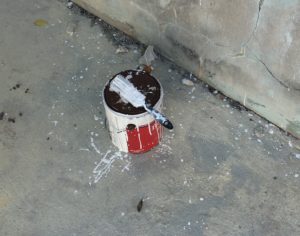 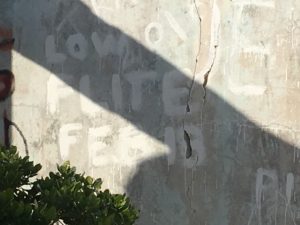