Last watch slowed our speed so that we didn’t arrive at a strange harbour in the dark. We actually got an extra hour of sleep as Tunisia is on London time. Christa was at the helm at 0730 when we docked at the Yasmine Hammamet Port Authority taking us from Italy to…Africa! Not something that everyone can say they’ve done. 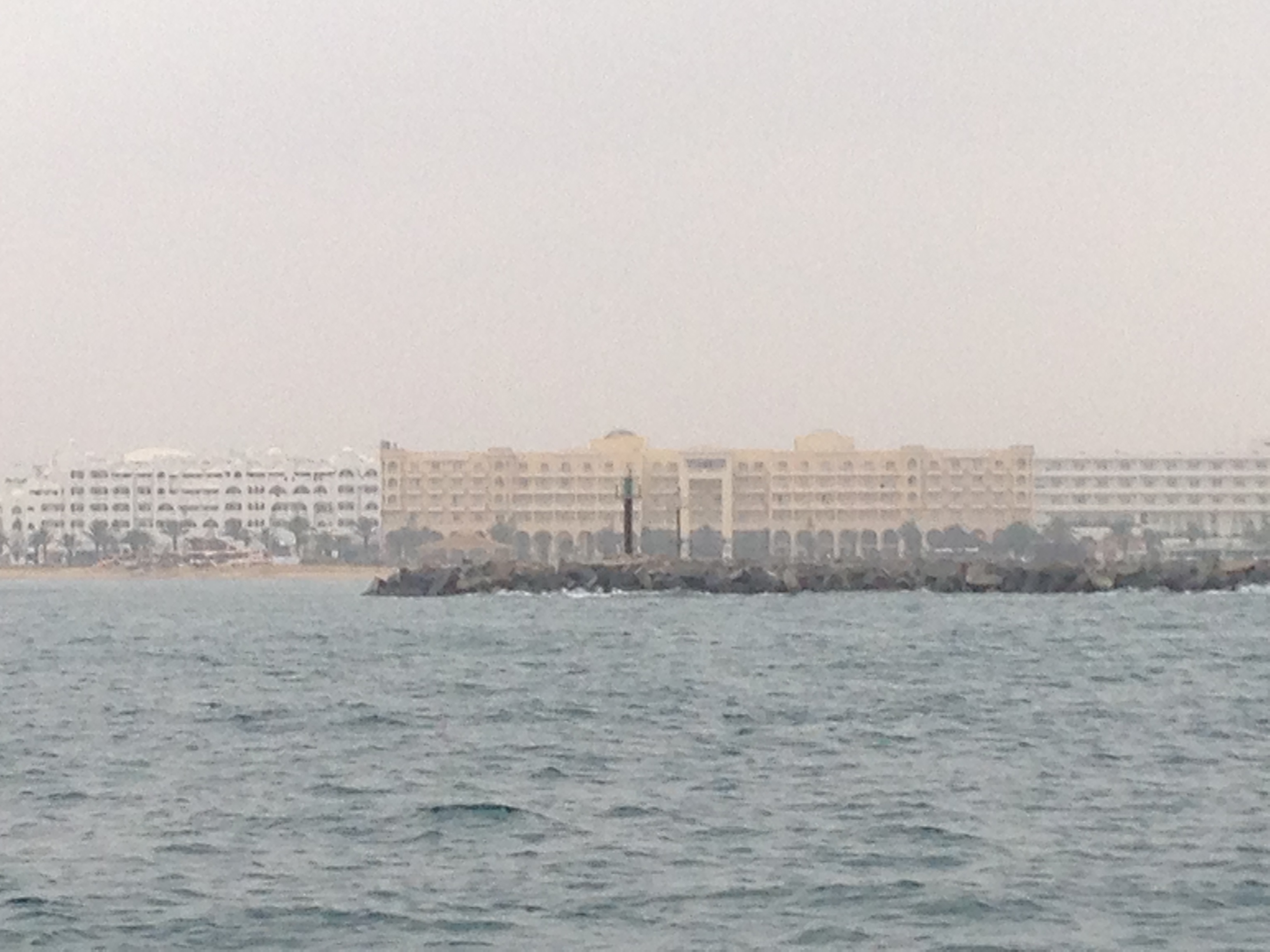 This is what our approach to the coast of Africa looked like. 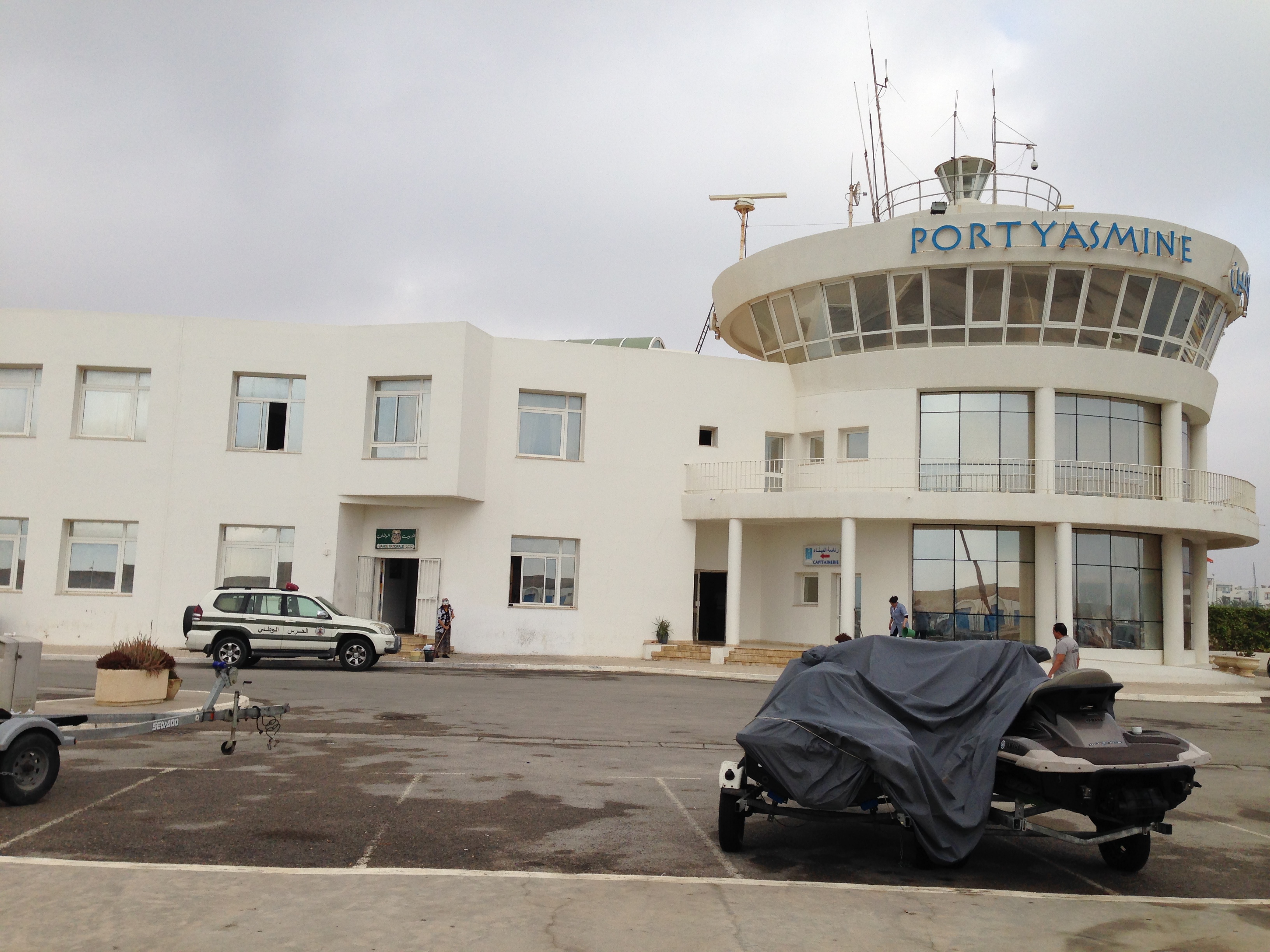 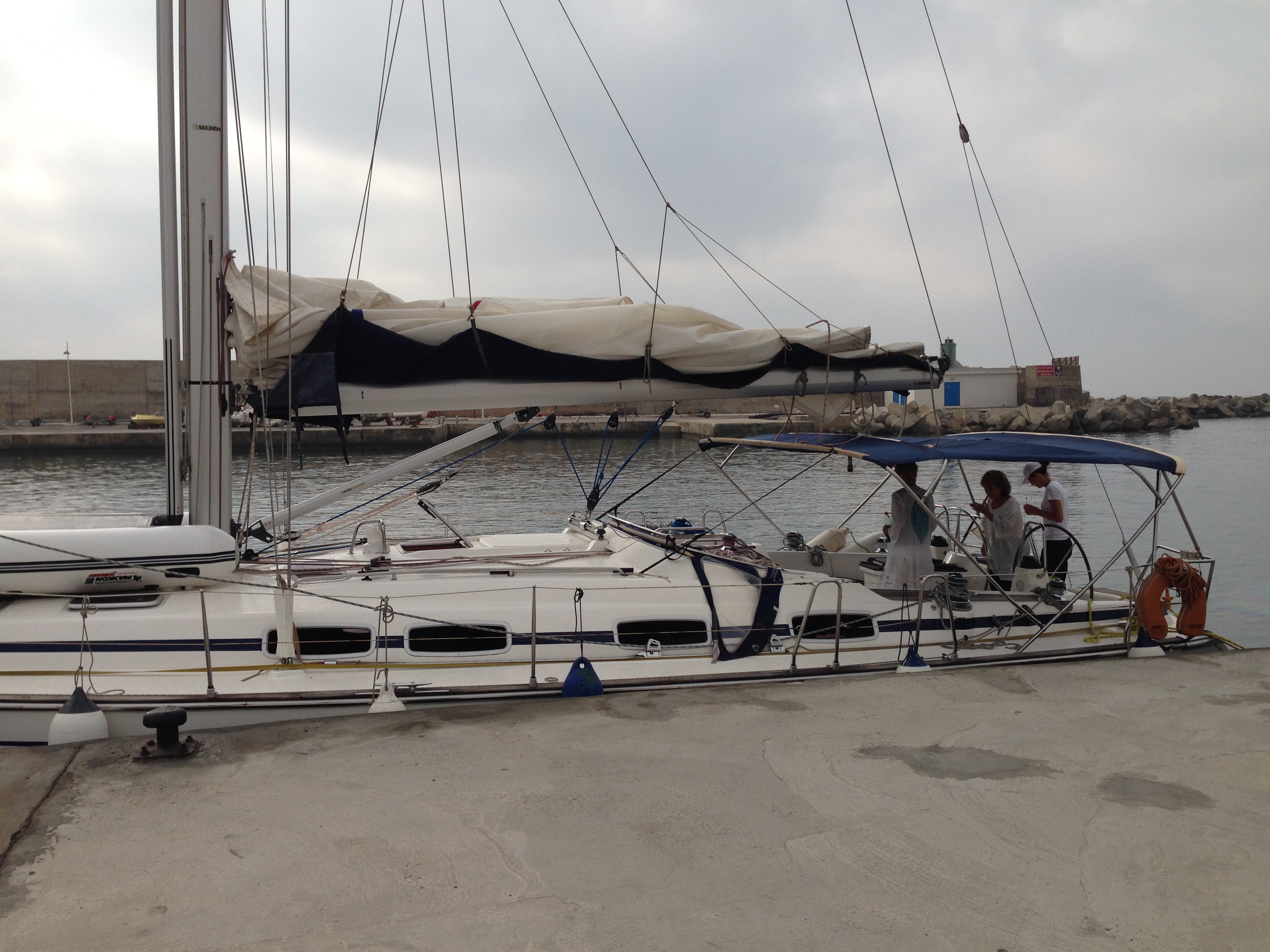 Here we are docked by the fuel pumps in front of the Port Authority about to start our ridiculously complicated clearing-in process.

Checking into the country and doing all the paperwork was an interesting experience for Christa and I who grew up in Canada on the US border. An employee of the marina met us coming in, helped us tie-up, and explained what we would need to do and where we needed to go. The first step was the Police Officer on the left side of the building with our passports. This was the bit that I would expect to be done at customs/immigration anywhere else. They stamped our passports and gave us a little entry card to keep inside them that we would turn back in when we left. The also asked for the boat registration and insurance and weren’t too pleased when we only had photocopies of them, but eventually continued. More uniformed officers continued to arrive into the office as they woke, after sleeping outside and were roused by our arrival. The Captain, Stephen, had to fill out some more paperwork, and the whole process took about 45 minutes.

One of them then led us around the other side of the building to the Custom Officer where we carried the paperwork that we had just filled-out. Before leaving us, in a very awkward manner, he asked us for a gift. I was prepared for this little event, sometimes known as baksheesh. I had bought a few packs of Camel cigarettes to use on such an occasion. I gave him one, he looked disappointed, but then walked off. Not sure how much he was looking for, but then realized that cigarettes are very cheap compared to NA or the Euro-zone, so I wasn’t actually giving him very much.

Inside the customs office there was one lady working. She looked at the passports, asked us what we had to declare and followed us back to the boat. An interesting protocol is that we must invite her on the boat so she can do her job. She looked around for a minute or two and then left. No demand for a gift.

We then return to the marina office which was in fairly good shape and reminded me of any number of fixed-base or charter operators at an airport. We said that we would be staying the night and to put us as close as possible to “Duncan and Kim”, a couple that Stephen knew and that I had been referred to via the Cruisers Forum. They lived there on their yacht Tiamat, and I think ran a business taking care of other people’s yachts for them when away. Generally they were the patron/matron of the expat set from what I can gather. Name dropping seemed to work as another employee jumped into a dinghy and led us to our berth, 2 down from Duncan and Kim. He then took Stephen back to the customs office to sign our declaration paperwork, something that I thought we already had done. We suspect it was another opportunity to ask for a gift. We didn’t give out any.

We talked a bit to D&K about the area, the marina and what has been going on recently. I gave them the rest of my “gifts” so that they could spread them around to the appropriate people. We then headed into town for a late breakfast. 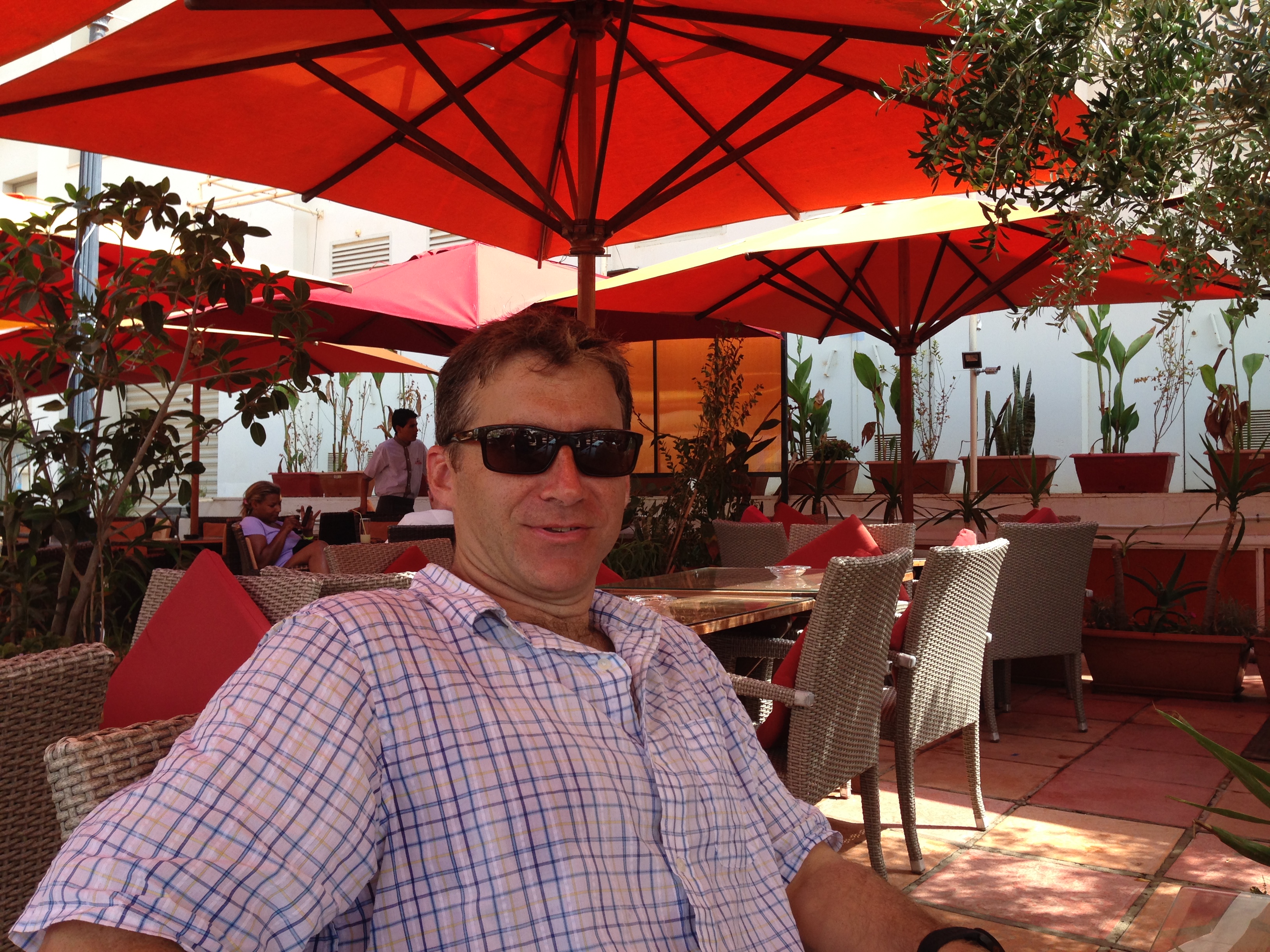 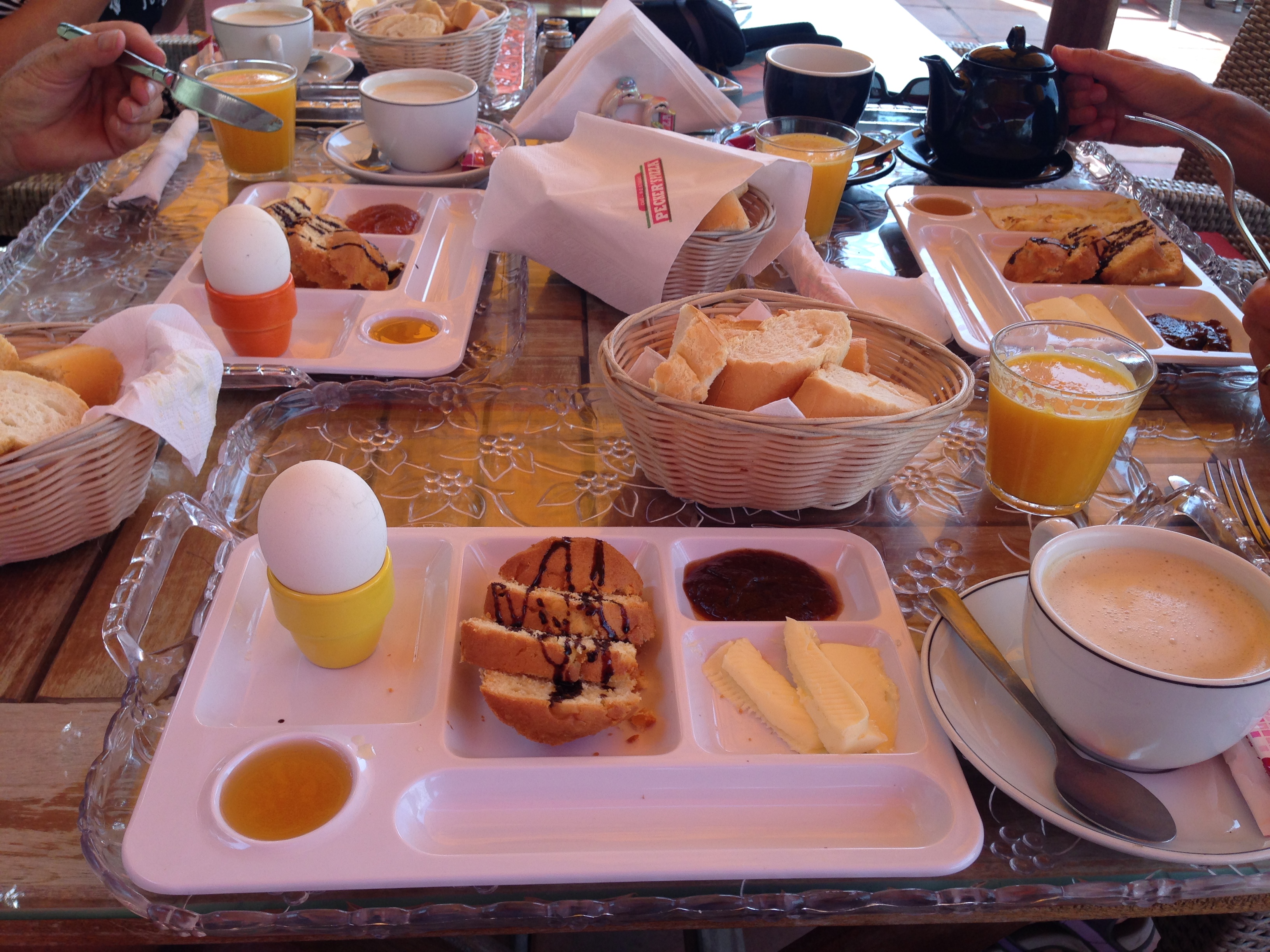 The main street was maybe 10 minutes from where we tied up. There were many shops and restaurants and a fair bit of pedestrian and vehicle traffic. We stopped at a place that Stephen had been at before, and order what was a fairly typical breakfast for us. The service was very good, the food was cheap, and one of the waiters even ran next door into the bank for us to exchange money when the ATM didn’t want to work with our cards. The service easily put anything we had experienced in Italy to shame. The only negative was the constant presence of flies on everything. I had experienced that before so wasn’t too concerned, but it was bothering Christa after a few minutes. 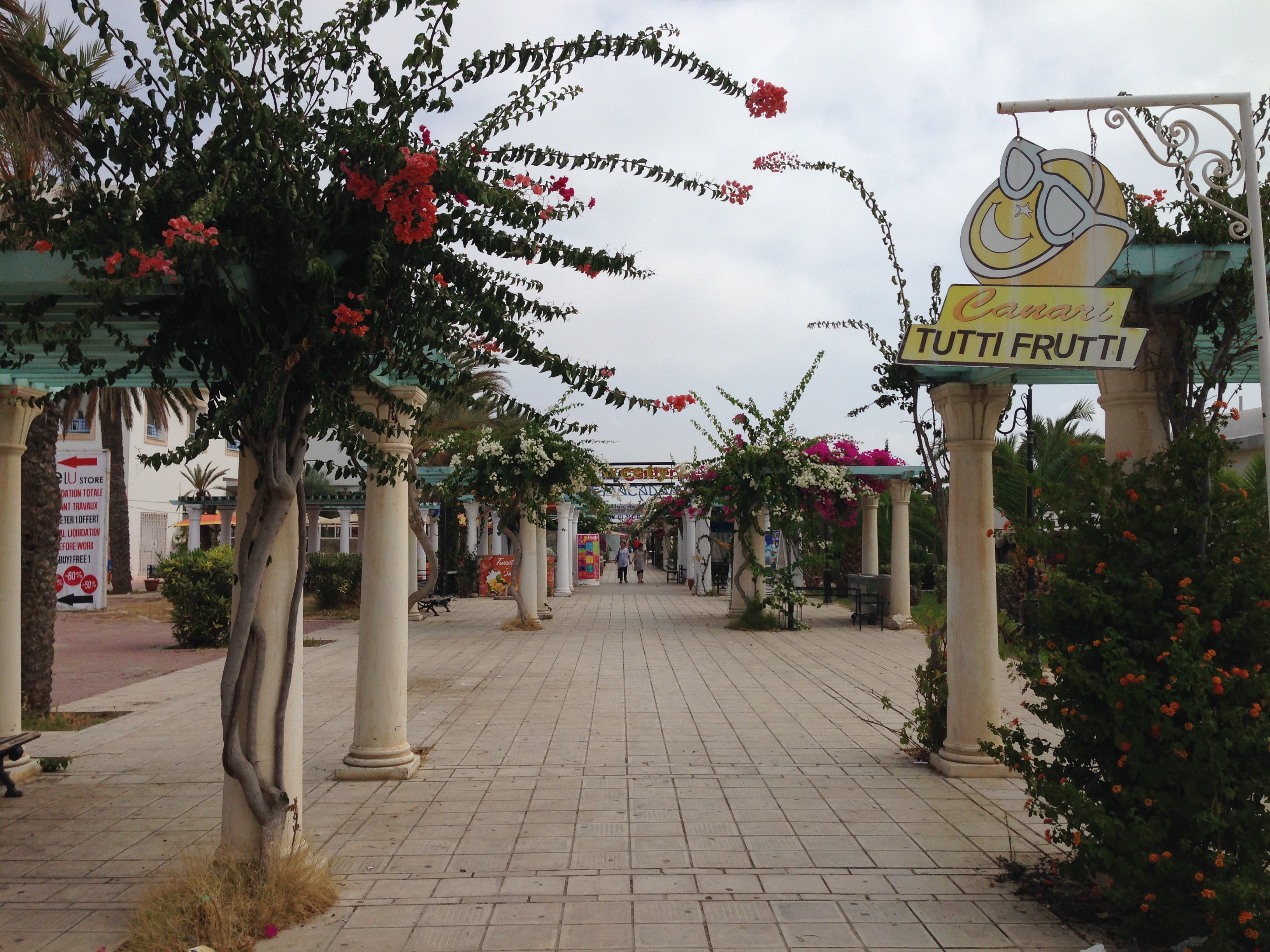 We walked around the area a bit, but I tried to keep to open shaded areas, or in the shops with air conditioning as it was oppressively hot and humid. The temperature was 38 degrees and it must have been 90+% humidity. The problem with going into the shops was that you were faced with very clever, but overly aggressive merchants. At one place the rug salesman had a Berber girl working with him so he could explain her plight, need for money, and she actually held up the rug samples directly in front of the door so we had to physically move her out of the way to…escape. We headed back to the boat to wallow in the heat and try to relax. 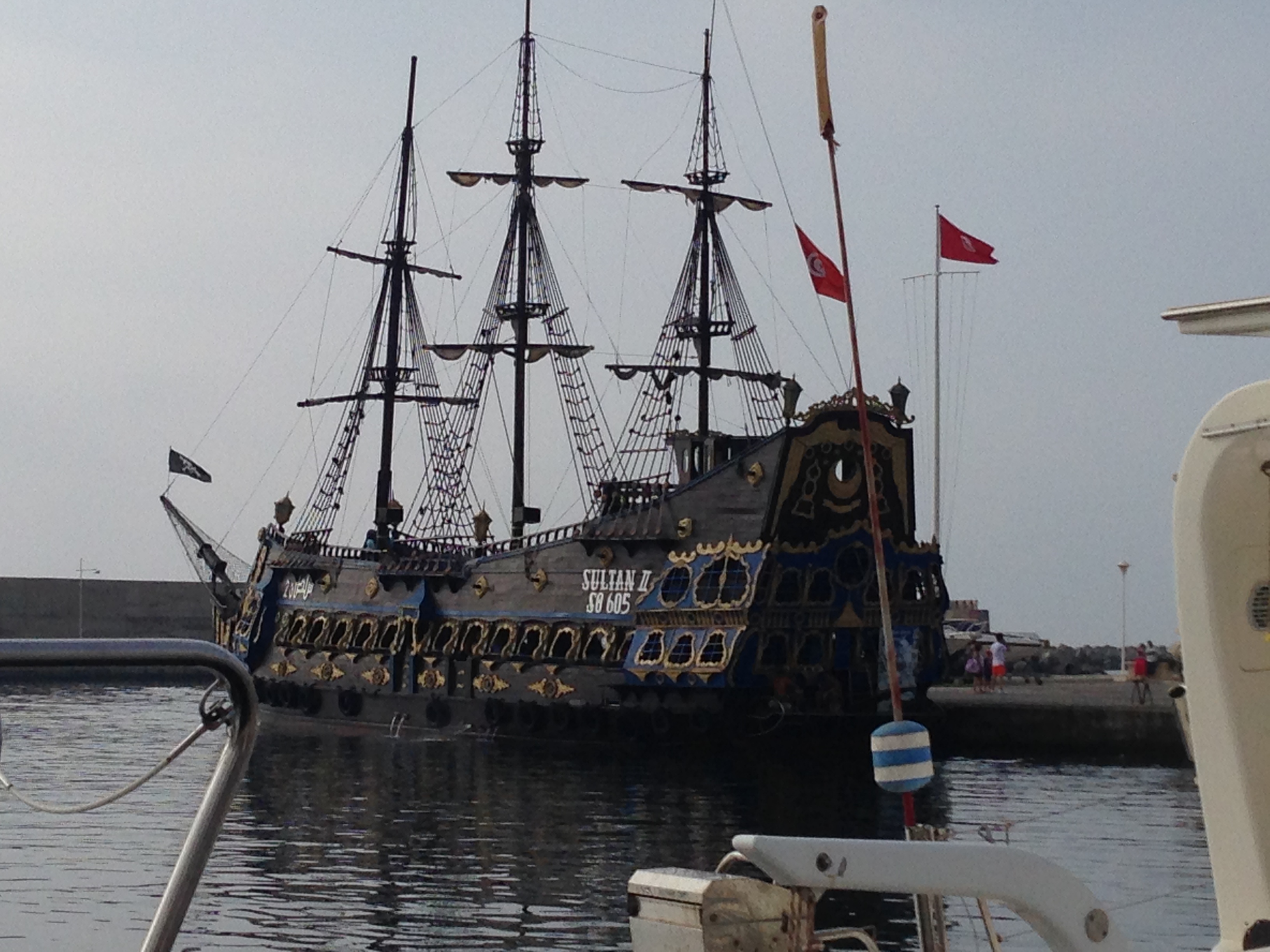 The harbour did have 3 of these interesting pirate ships that were constantly headed out to sea with a load of tourist and then returning for another batch. The MC was always quite loud, and the crowd very enthusiastic, almost chanting like a soccer/football match each time they returned.

Jeremy and Christa headed off to one of the beaches in the area that we saw, and in spite of warnings she went swimming in the “less than clean water” on a beach that had a bit too much garbage for my liking. It seems the area was spared from the violence of the Arab Spring, but general maintenance had slipped a bit while the country was still recovering from such an upheaval. She did spot a camel ride, so she came to fetch the rest of us to watch her go for a ride with Stephen’s friend Anna, and solidify her African experience. 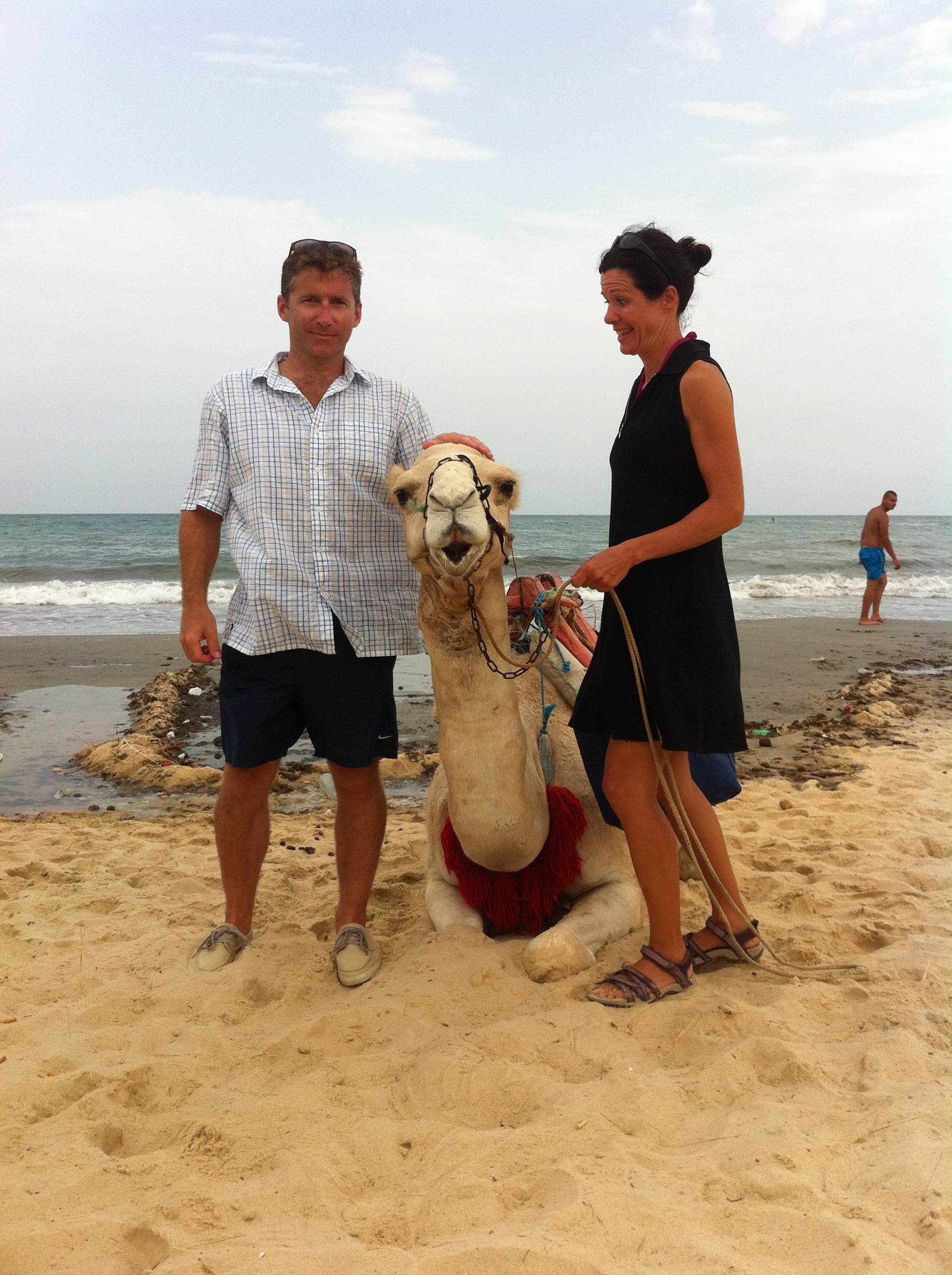 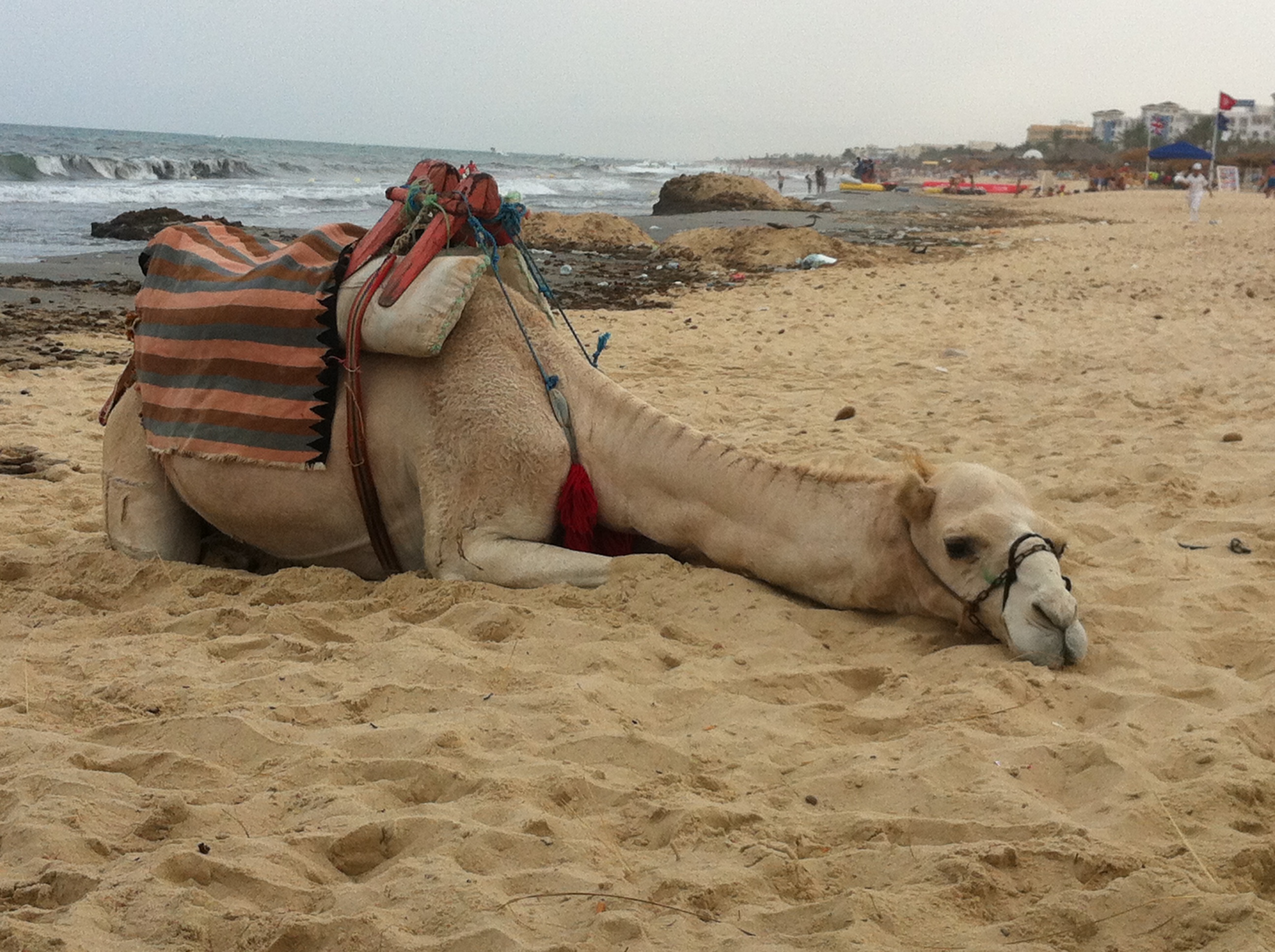 When we got back to the dock, D&K offered to take us out for a real Tunisian dinner(!) Unfortunately we had already decided to leave that night in order to ensure we made it back to Malta Friday night, for our Saturday morning flight back to Naples. We headed to the fuel dock to clear out at 2030. 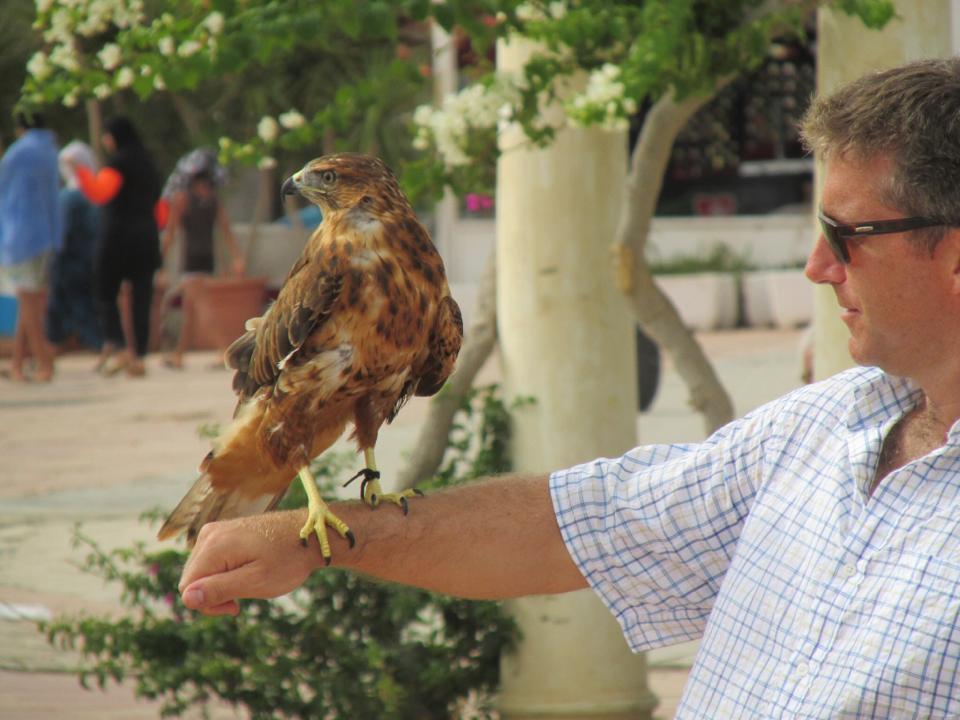