We awoke to the sound of a jet engine taking off at the nearby airport and it was already light outside. After breakfast on the boat, Stephen advised that I would skipper us out of Lampedusa marina and into Yasmine Hammamet, Tunisia, our next destination. Yikes – time to put my knowledge to the test! The first thing John did was sit me down and help me get organized. Prior to our trip, he had prepared several handy checklists which proved very valuable, leading me through all the points I needed to consider to prepare the boat and crew for our passage. After I briefed the crew on the plan to leave the harbour, we prepped the boat and were underway by 9:20am.

While I was preparing myself and then the crew, I couldn’t help but notice the increasing number of fishing boats which were pulling up on the pontoon next to us to sell their catch to locals. This was making our exit a bit more challenging than I initially thought…much to the delight of our instructor. We motored out of the harbour without incident and once into the mouth of the harbour, headed 297° for Tunisia under genoa. 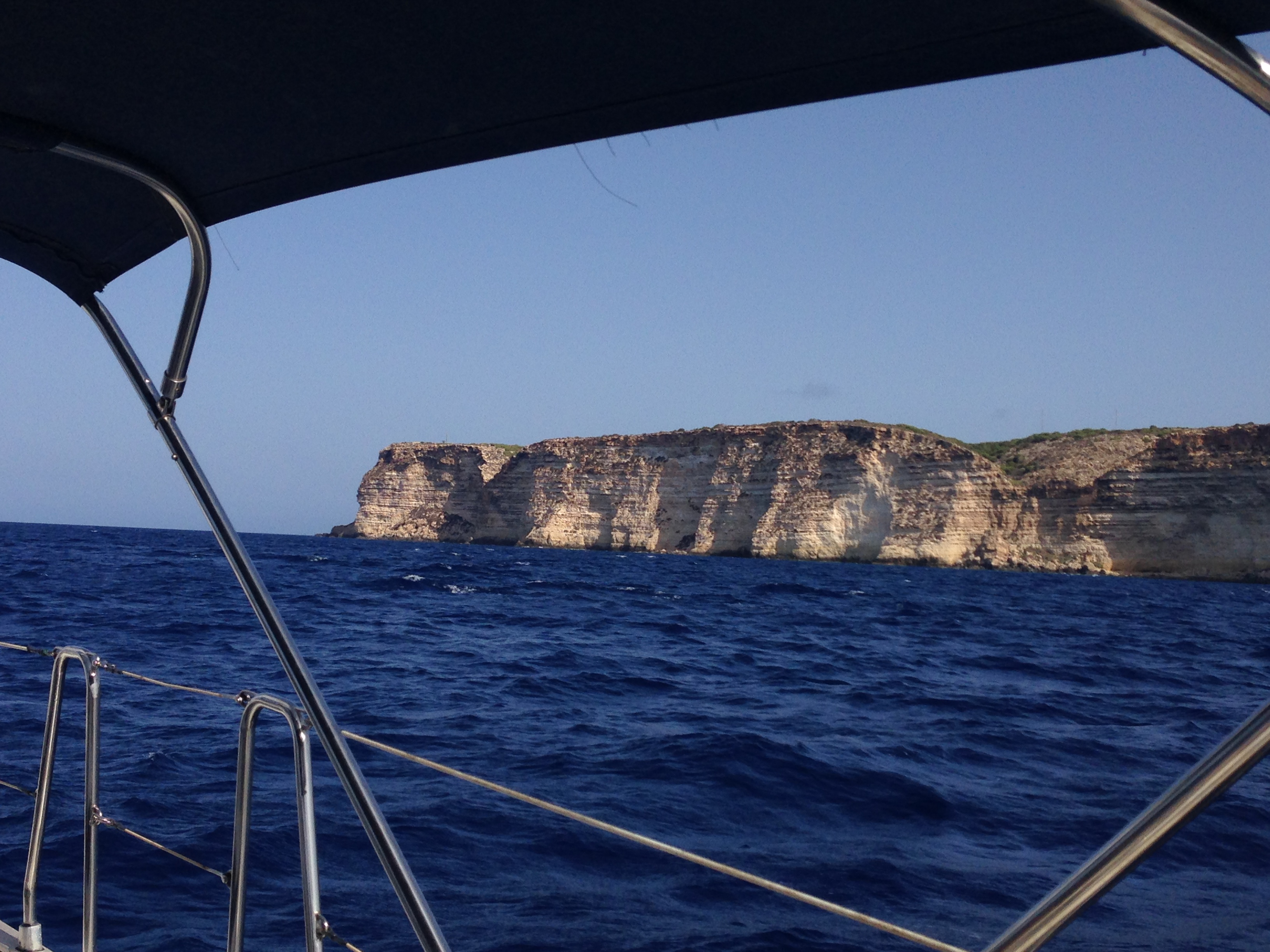 Winds were good and steady this morning, about force 4 on the Beaufort scale. Finally we would get to sail!

As we were coming around the southwest coast of Lampedusa, Stephen pointed out Rabbit Beach was voted “best beach in the world” on Trip Advisor in 2013. Even through the binoculars however, it didn’t seem all that spectacular but apparently it offers pristine sand and calm waters, great for families. Since there’s really not much else on Lampedusa, this wouldn’t be my choice for a vacation destination.

With the winds steady at 8 knts, we raised the mainsail and enjoyed the gorgeous sunny day. While underway, Stephen gave us some useful tips on items normally noted on a boat log, how to record cloud cover using the Okta scale (1-8), and how to use a compass & the sun to tell time with your arms. 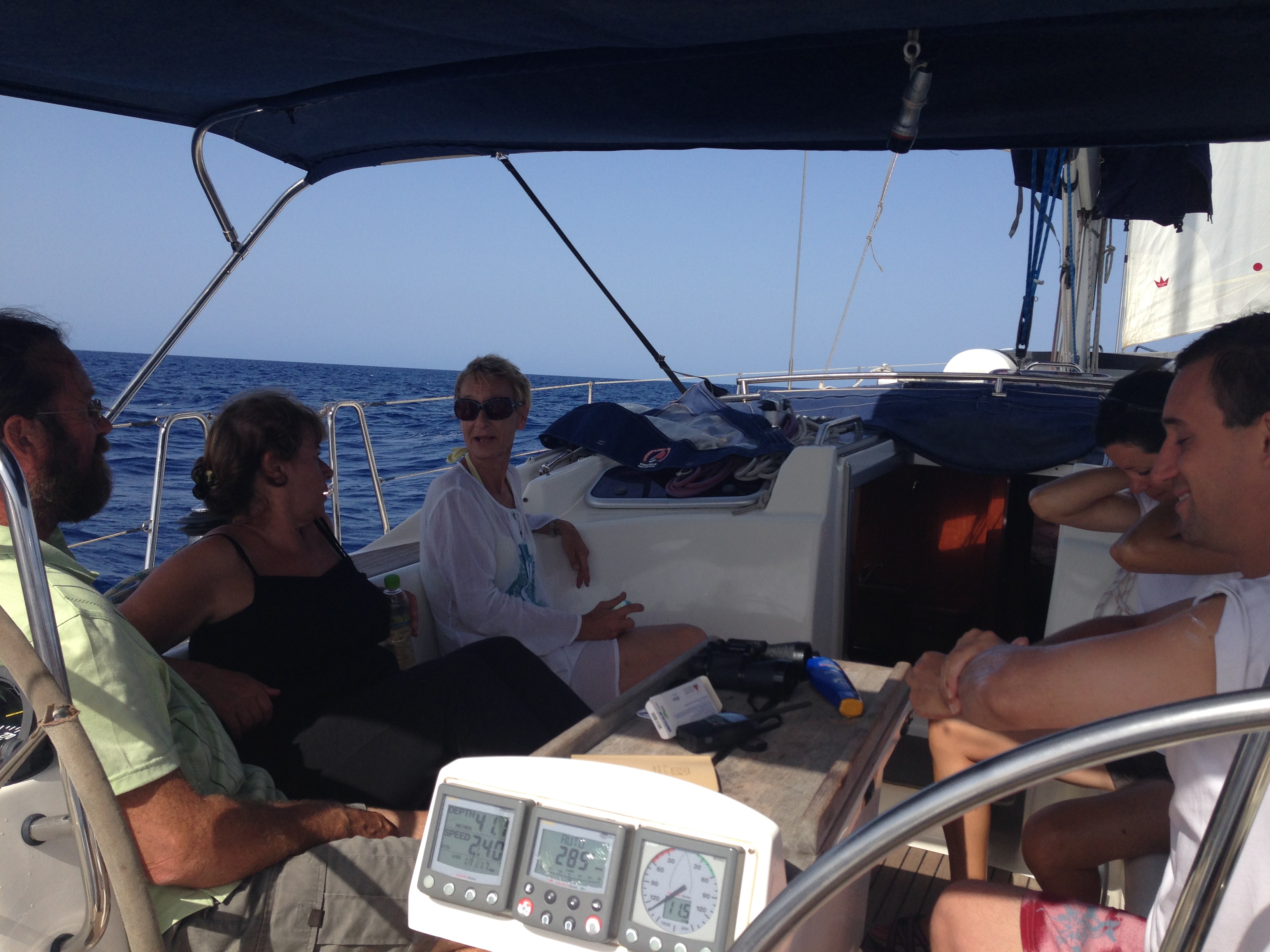 We also discovered what the nasty smell was coming from the aft head. It seemed that the toilet had been leaking into bilge – yuck! We were happy that the forward head seemed to be working fine, and we still had 2 showers…or so we thought. Shortly after, we realized that the forward shower wasn’t draining properly either. Oh my… good thing we were headed to a full-service marina!

At 12 nm away from Lampedusa, we removed the Italian courtesy flag and as Sylvie attempted to raise the Tunisian flag, it got blown overboard. The bright red flag was floating and easily visible in the water so we decided to practice a “man overboard” drill to try and retrieve it. Good thing it wasn’t really a person overboard because as we circled back we could no longer see it. Hopefully the Tunisian officials won’t mind that we’ll show up without flying their flag.

Our passage would be about 28 hours so we decided crew watch would be 3 hour shifts starting at 8pm. I was thrilled to be feeling much better but still very conscious about how much time I spent below deck, wary that too much motion could bring an onset of nausea. I had taken a Drammemine every few hours and it really seemed to be helping.

After lunch, I started planning our approach into Yasmine Hammamet with the help of Sylvie’s iPad using the iSailor app. It gave us a detailed map of the harbour entrance with landmarks and markers, which I was then able to sketch in my log book for our grand entrance into North Africa. Unfortunately Sylvie had just started using the app prior to our voyage and wasn’t familiar with how it worked so it quickly became a frustration rather than a help. I was happy when soon after we were distracted by a pod of dolphins swimming off our bow!

John & I headed to the bow to get a better look and Anna grabbed her iPad to take some pictures. Several dolphins swam alongside for about 10 minutes, breaching the water and giving us a great show. Stephen said they love to see human faces, and one swam alongside with its body turned so its right eye was looking directly up at us – an incredible moment!

Shortly after, it was time for John & I to go on first watch from 8-11pm. Winds were variable and we had an interesting lightning display off on the horizon. On the open water we came across many shearwater birds. It was amazing to watch them skim so close the water’s surface without ever touching, sometimes being obscurred from view as they passed behind a wave crest. At night as the boat approached a floating shearwater, it would get startled and fly off, only visible against the dark blue water in the path of our boat lights.

We were relieved by Stephen & Anna at 11pm and headed off to our berth. Happy that we were both feeling better and looking forward to a few hours sleep before our next shift at 6am. Through the day we had made good time so we were now planning to arrive in Hammamet around sunrise.