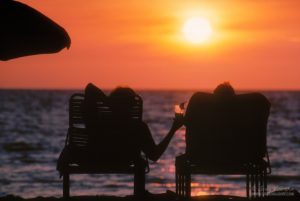 Ah…the glamour and style of living aboard your very own boat in the tropics. Full of sunsets, fruity drinks and lazy days with nothing to do.

To try and reinforce that ideal existence while Christa is away, today I played with…our toilets. Or “heads” if you want to keep up with the cool kids. 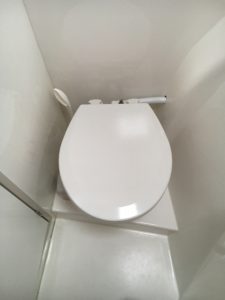 Yes, the humble marine head. We have three of them on our boat. That gives plenty of privacy for many guest, triple redundancy for all the parts associated, but also three times the amount of maintenance and/or work when something goes wrong.

The boat is only approx 2 years old, but even so, there are little issues that need attention. One of them was the fact our toilet seats were replete with rusty screws in the lids and seats. 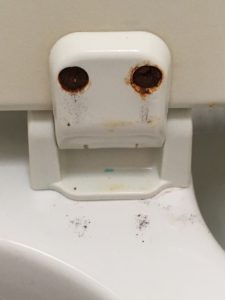 Most of the screws on the toilets looked like this. They weren’t really causing an issue at the moment, but obviously had to be addressed at some point so I tried to remove them. Then they started causing issues. I managed to get about 1/3 of them out, with the rest not wanting to budge. They did however produce a lot of little bits of rust residue that were now slowly falling out and staining the bowls and everything around them. I even tried those nifty little Craftsman Screw Extractors, but the screws were so far gone all they did was grind up into more fine dust powder.

In the midst of cursing the person who chose to use rustable screws in a marine head, I notice they were Bemis Toilet Seats that you could likely get anywhere. A quick check of Home Depot online showed they had a number of Bemis seats that would fit.

After I got there I noticed there were both white wooden seats, and white plastic seats that looked almost the same. And the ones on the boat were wooden!

How could anyone at Robertson & Caine think it would be a good idea to put wooden toilets seats with screws that can rust on a boat, instead of a plastic seat of the same shape and size, with no screws in it? 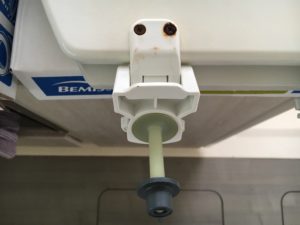 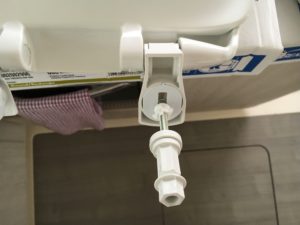 Wood that will swell and deform needing 8 rusty screws, or plastic that holds its shape with no screws and weighs less?

I even popped for the slow-closing lids to try and get some of that glamour back.

What a PITA this boat living is…

We Now Live On Our New Boat!
Tropical Storm Philippe