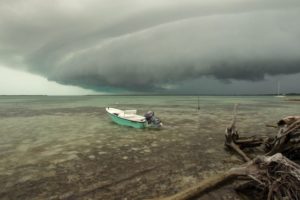 Recently we had a great sailing adventure to The Bahamas with friends that own a Leopard 45 catamaran. We will be forever grateful to them for getting us out of our little AirBnb cottage and stop feeling sorry for ourselves since we no longer have a boat. Along with us, another nearly identical Leopard 45 came along for the trip.

Leopard catamaran owners seem to have an affinity for each other, both ashore and when cruising. It is not unusual to see 2 or more of these distinct looking sailboats sailing by, or all anchored together. As an aside, a group of leopards in nature is known as a “leap,” so whenever we saw 2 or more we referred to them as a leap of Leopards, and gave ourselves credit for being so clever.

The other couple was fairly new to the cruising world and so Christa and I spent some time with them on various legs of the trip discussing what we had done and why, covering all manner of topics. One of these was weather, prompted by a front that blew through when we were moored next to Chub Cay.

Before we flew back to Fort Lauderdale, I promised to show them some of the weather resources that we had used while we spent the previous winter in The Bahamas ourselves. We had posted about it before, but instead of just sending them the link, we put together an email that was a bit broader in scope based on what we had talked about while travelling with them. I organized the categories of resources as Online, Apps, Education and Books.

When we had access to the internet last season, which was most of the time through BTC, I used several online sites and apps on a daily basis. Sometimes it would be a 5 minute confirmation of what we expected from the previous day, or I could spend up to an hour if there was a weather change approaching or we were moving a fair distance. We also planned for the internet to be sporadic much like it was at Norman’s Cay a couple days ago. Even though we were on the BTC system, the data was sometimes terrible, so we would try and remember to get 72 hours’ worth if possible, in case we couldn’t get online the next day. Each person will find their own way with respect to weather, but we recommend everyone become pedantic about it each day and make it part of an automatic routine while aboard.

Mike’s Weather Page – Probably the best aggregate of information online. Combines endless sources so it will take a while to figure out what to use to suit your needs. It focuses on the Continental US, so some of the info will start to get thin once you go offshore if you’re looking for detailed forecasts, but it provides good access to worldwide tropical storm info. You can access US, Euro, Canadian, UK models to get more than just a single source of data. We contributed to Mike’s Patreon account while on the boat.

Tropical Tidbits – A site from Levi Cowan, who is a Florida State University (FSU) grad student of meteorology. This site is especially helpful during hurricane season. We contributed to Levi’s Patreon account while on the boat.

Instituto de Meteorología de Cuba (INSMET) – Cuban (yes Cuban) weather site whose radar extends into the Bahamian southern islands. Useful when we were at Long Island. You don’t really need to read much, but you can use Google’s page translate feature to travel farther in the site.

Aviation Graphical Forecast for Aviation (GFA) – Good as an alternate source of info for those who are familiar with these forecasts from aviation.

Chris Parker – A very popular forecaster who does radio, email, fax, and phone in-services. We subscribed to his email service for 90 days when we first started cruising The Bahamas. Not sure if we will use him again as it tended to reinforce what we had already encountered with other resources.

NOAA Ocean Prediction Center – A lot of info is provided here. Likely too broad for what is needed for back and forth between Florida and The Bahamas, but may be useful once you start travelling further with long range travel.

Some of these apps cost a fee, and some are free but will charge you for more information that you will likely want after trying the free app. Since apps filter out a lot of extra information available through a website, consider that you may not be getting different information from different apps. For example, they may all be using the same data sources and only presenting it with their own graphics. You’ll have to verify the source with the vendor if you want to be confident about what they are using is actually different than someone else’s. It’s kind of like three different newspapers all covering a story by the same author.

You also have multiple models that are in play, and with some online sources and apps you can select which model you want displayed, or multiples at the same time. Why does this matter? Specific to hurricanes, over the past few years the Euro model has been more accurate with Atlantic hurricanes than the typical US-favored Global Forecast System (GFS) model. You can read about the different models and their limitations here: http://www.theweatherprediction.com/habyhints/122/

Predict Wind – One of the best known apps, and is also available as a Windows App on your laptop. Predicts wind, waves, etc and based on your planned route will suggest the most effective way to get there.  Very useful both when you’re starting out and even once you’re more experienced.

Windy – WINDY – Wind Alert – Windfinder Pro – These are the four apps that we used each day to look at winds & weather. The one that usually predicts that strongest winds (most pessimistic) is Wind Alert. WINDY and Windfinder also give you tides, provided there is tide data for your location.

AeroWeather – Fairly useful as a free app to give you aviation Meteorological Aerodrome Reports (METAR) and Terminal Aerodrome Forecasts (TAF) to compare to maritime forecasts.

MyRadar – Very good app that displays a radar shot of your current location (where the iPhone is) that we used to good effect even without our own radar on the boat. Runs out of coverage right around West End and Bimini.

Imray Tides Planner – Although basic-looking, this is a good app that is not dependent on a data connection. It’s the entire almanac on your phone. You do need to pay for an annual license to use it.

World Weather Project – Presents both the theory and some current conditions. A lot to dig through and learn from here.

ASA 119: Maritime Weather Endorsement – Might be tailored for an in-person course, however you can still get the information to use as a reference, and courses like this may even help with insurance rates. An alternative to buying the ASA manual, or from any other organization, is to use just their curriculum and find the information yourself. The advantage is that what you need to learn is written out for you right there on the main page, so if you have access to the internet or any other weather resources, you can do the same work plan without spending more money. The disadvantage is that you won’t get “credit” for the course which may provide a financial benefit when talking to your insurance company.

Hurricane Prep For Boaters – same as above

Introduction to Weather for Recreational Boaters –  From Canada Power and Sail Squadrons.

Fundamentals of Weather – same as above

Global Weather – same as above

Below are some free downloads and Amazon links. The Amazon page for these books will give you some more suggestions that you may like near the bottom.

Mariner’s Weather Handbook. (14.8MB) Thanks to Steve and Linda Dashew for making this available from their website SetSail.com. Note that it’s a beast of a book and 14.8MB to download.

Surviving The Storm. (19.9MB) Another beast of a book from the Dashews.

Handling Storms At Sea  This is a great book that will either give you knowledge and confidence in stormy conditions while sailing off to far-away places, or scare you into never leaving the sight of land and quickly escape from the sailing life.

Sailing a Serious Ocean. John Kretschmer is a well-known author and instructor. There was a PDF copy of this floating around online a few years ago.

Storm Tactics. The Pardy’s are royalty in the cruising community, and they have written many more popular books beyond this one on weather.

Storm Proofing Your Boat, Gear and Crew. Captain Fatty is a world cruiser and a bit of irreverent author. He’s plain spoken and matter of fact based on his experience which will likely offend people when he points out what they’re doing is silly/wrong. For me that tends to be the best information and recommendation to consider. 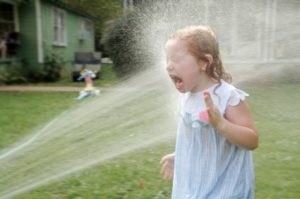 There is a lot there to consider looking into, let alone trying to cover it all. Like most everything else associated with sailing (or flying), the learning never ends. Putting the list together was good for us as well, as it will motivate us to get back in the books too.

Our friend has basic weather knowledge from flying which will provide a good foundation to start with. It is essentially the same, provided you consider the water surface conditions (waves and currents) you would not have worried about while flying. 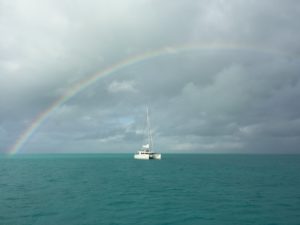 We encouraged both of them to get involved with weather so they will each understand at least the basics in order to discuss items like what happens when a front moves through. We’ve found that a lot of couples leave it to one person, but we recommend everyone have fundamental weather knowledge when living aboard.

*featured image photo credit to Southern Boating from an article on…Bad Weather in The Bahamas.

Proceeds from Selling our Boat
Sailingmovies.net