Assuming you all enjoyed my semi-rant about all important toilet seats, here another issue that should be a negligible item to address, but turned out to be the opposite…for me at least, after sweating all morning in the Florida humidity. 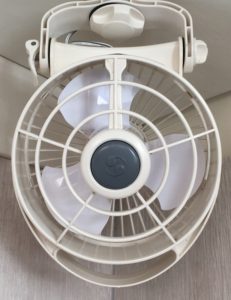 Our boat has five of these Caframo Model 748 12-volt fans. I was surprised to learn that Caframo is a Canadian company based in Georgian Bluffs ON.

There is one in each berth, and two in the galley. You’ve likely seen them on a boat before as they are quite popular in the industry. Until today though, ours didn’t look like the above picture, they looked more like these pictures below. That’s what two years of use and no cleaning looks like. 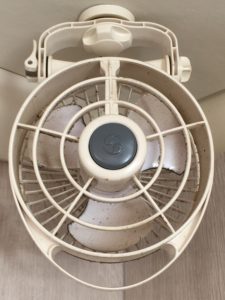 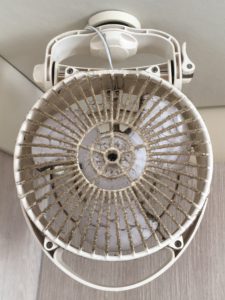 Granted this one was over the galley so it was the worst, but you get the idea. Hopefully the ones you have seen aren’t this dirty, but they probably were as noisy as ours tend to be. Only two could be described as “quiet” with only noise from moving air, occasionally, while the other ones had some contact noise from either the cage or something else which made them annoying to use.

We had to get them clean and fix the noise so I tackled them today at about 1100.

Taking them apart was easy enough. Four Phillips screws on the back of the cage gives you access to the fan itself which is held on with an 8mm retaining nut. I didn’t want to disconnect any wiring so I left it mount while I cleaned it with a microfibre cloth soaked in hot water and Mr. Clean. I also set the fan and rear cage in the same water and the dirt/grime came right off.

As I was putting it back together, I thought of Christa being so happy/thankful I took them all apart, cleaned them well, and didn’t just do a half-assed job just to say I got it done.

That all took about 10 minutes.

Putting the first tone back together took more than an hour.

The problem is (I think) that the fan is held onto the motor with a little Micky Mouse friction sleeve that the retaining nut compresses as you tighten.

I first just tightened until I felt resistance, put it all back together and turned it on. It spun and made a horrible, “I’m about to grind myself to pieces” noise. I took the back off and loosened the retaining nut and it still made a grinding noise. I loosened it some more and then watched the fan back itself off the shaft on the motor it is supposed to spin on.

I continued with this process while learning along the way that a microscopic turn either way will result in either the fan coming off during use, or being too tight and making a grinding noise. Calling it a turn is exaggerating. Just thinking about turning it seem to accomplish either of these outcomes.

This was the port-forward berth. I left this one and went on to the port-aft berth hoping for better luck.

I then tried the one in the master suite, with a bit better result, but it is still a choice or noise or the fan backing off the shaft.

For the two in the main salon, I left the fans on the motor shaft and cleaned them, poorly, with just the cage off the back. My theory that if they are semi-workable the way they are just leave them the way they are and all should be fine.

Nope. Just by me cleaning the fan blades I somehow unbalanced it or moved it so that it produces more noise than before I cleaned them.

I went back to tackle the first fan that I seem to have screwed up. Even though it’s a smooth shaft with no threads, I was going to put some Blue Permatex on the shaft to see if it would keep the fan from backing off, but it seemed to be spinning without any noticeable movement to indicate it was coming off the shaft. It was still making more noise that it should be and I don’t trust it, but I left it alone.

We’re moving the boat to Just Catamarans on Sunday, so I figured I’d leave well enough alone before I did more bad than good. I’ll ask one of the techs who likely has a 5 minute fix for the fan. My frazzled nerves will take a lot longer…

I’ve also sent a note to the manufacture directly to ask them what the secret is.

These fans list for $69-89 depending on the source, so they’re not cheap, but they sure seem to be cheaply made.

The only fan test I could find was from Practical Sailor, and was back in 2008 so my fans were still new to the market and, showed promise.” There are of course lots of forums and blogs out there with various opinions, but regardless of the apparent quality of mine at the moment, these do seem to be the preferred fan out there. 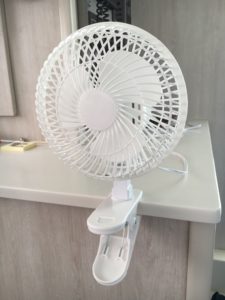 Even before my episode of cleaning them I had purchased a couple of these Pelonis 6″ clip-on fans at the local Ace Harware. I used one in the master berth instead of the built-in fan as I could get it closer to me, and the other I set next to where I tend to sit in the salon.

They cost $16, move more air at a low setting so their quieter. You just need an outlet to plug them in and you’re good to go.

Unless the techs have an easy fix, there may be 2 more of these in our near future.