The time has finally come to move the boat from my gracious hosts at Calypso Sailing to Just Catamarans in Dania Beach FL. Christa was still in Ottawa, so Lance, one of the owners of Calypso, came with me to ensure I didn’t “get lost.”

Here we are in the forward lounge using the remote as we start heading north. It’s a neat little toy, but I’m not sure if we’ll use it that much. I’d rather be at the actual helm to avoid disaster. 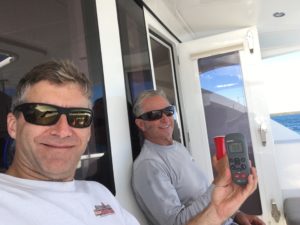 The wind was light and on the nose the whole way, so we never even considered raising the sails. 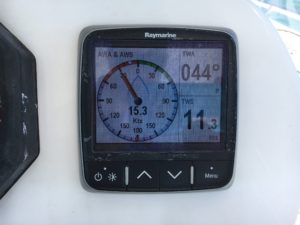 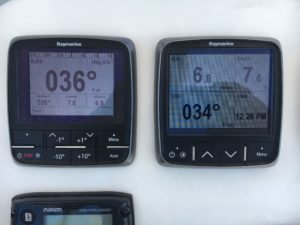 That was pretty much it for most of the first 6 hours, until we started getting closer to the Miami area. Traffic started to pick up with all types of fishing boats and meg yachts, with only a few sailboats around. 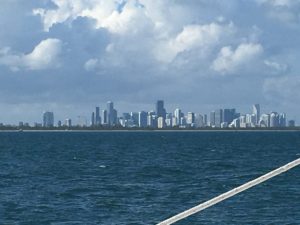 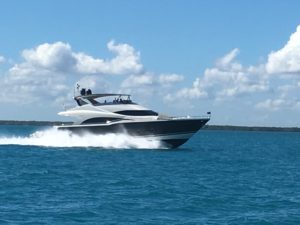 We had forgotten about the fishing line we had put out so long ago, when all of a sudden, “Fish on!” Lance grabbed the line and started reeling it in, while I tried to video it while watching for the other boat traffic.

We just threw him back after the picture, as we didn’t know how we were getting back to Key Largo yet, and my freezer had been off for a while so likely not cold enough to throw him in. We think it was a Crevalle Jack. 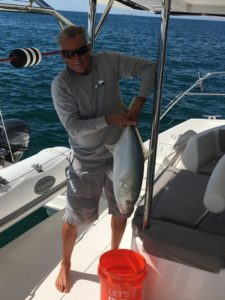 As we approached Miami Beach itself, this started to get real busy. It was a Sunday so the beach was pretty full and so was the water. Jetskis were buzzing around like flies, and we were waiting for one of them to do something stupid with us. We had watched a number of them see who could get to a point the quickest as a type of game with 50ish foot boats doing over 30kts. Kind of like racing the train to the crossing. I think we both started to review our first aid procedure in our heads. 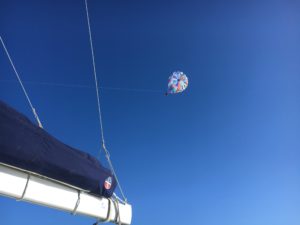 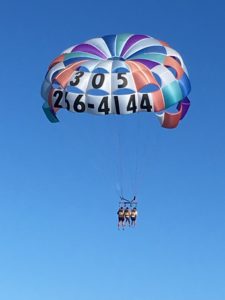 Planes towing banners at maybe 250 feet, and two parasailing boats that were dragging their customers occasionally at 100 feet high…next to out 63 foot mast.

Now this guy, on the other hand, was a pleasant distraction from all the jetskiers buzzing around like flies trying their hardest to run into something…like us.

Our destination was Harbour Towne Marina where Just Catamarans is one of the prominent tenants. To get there you have to enter the Stranahan River inlet and pass Port Evergaldes, a major industrial port and as it turns out, has it’s fair share of cruise ship traffic. I think we watched and/or manoeuvred around 6 ships leaving via the same inlet we were trying to enter. 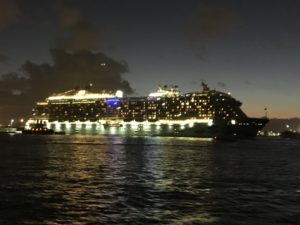 I think this was the third one to come out the inlet as we were approaching. The pilot boat was running back and forth from each of them so there was a bit of time before each one started moving. We managed to time it perfectly, by accident, to get in and turn the corner by the terminal before the last 2 started moving. 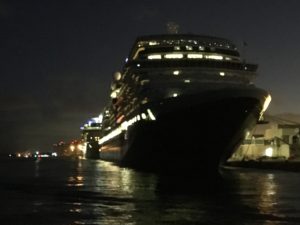 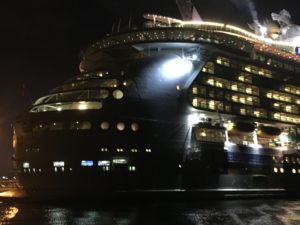 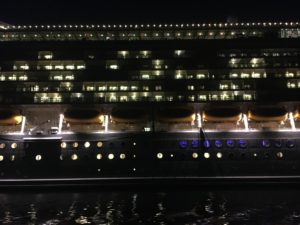 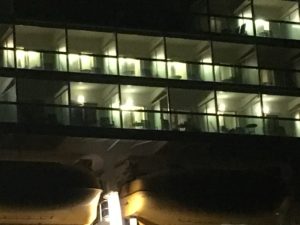 This freaky landing-craft looking thing started moving just as we approached it. It didn’t matter that we were there cause he was coming out! 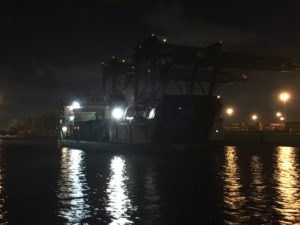 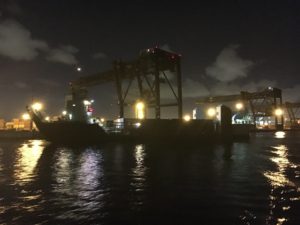 What I didn’t manage to get a picture or video of was a rather large and menacing RHIB that was hanging around the stern of the first cruise ship still tied up to the dock. Just as we approach about 1/3 of the way down that ship and started taking pictures, it squawked it’s siren for a second and then started flying towards us at great speed. I thought to myself that this will make an interesting story for my second trip ever on the new boat…boarded by some agency from homeland security. Then I realized I couldn’t remember where I put all the boat’s paperwork. Awesome. An even better story.

It looked like it was going full speed right towards us, so I assumed we had gotten within some imaginary “too close” line to the cruise ship. Lance and I both gave each other a “what the hell is this all about look” but then it sped right past out into the main harbour, with numerous lights and strobes flashing, loaded with guys all kitted out. It was kind of like the feeling you get when a cop turns the lights and siren on behind you in a car, then passes right by chasing someone else.

So we made it to our destination, avoided running into a cruise ship and/or getting arrested by Homeland Security.

I guess that means it was a successful trip.