Once you start living aboard, your perceptive on various things is supposed to change drastically from your previous landlubber life.

I think I just had such an experience, and my response was quite disproportionate to how I would have reacted a few months ago. This little nugget concerned our main salon door for which we only had one key. 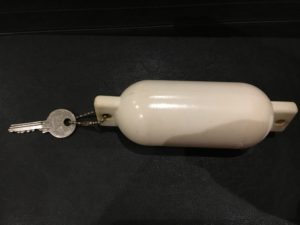 The key in question. Only one, and it comes with a float that is too big to be able to carry in your pocket…that is unless you want that look.

Obviously only one key wasn’t enough, any more than it would be for a land-based house, so I set out to get more copies when I was “baching it” back in Key Largo. 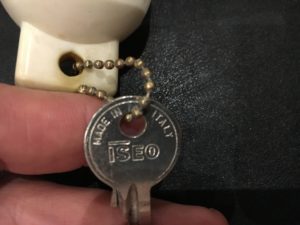 When I showed that “Made in Italy” key to 5 different locksmiths over 3 days, they all laughed, then tried their hardest to find something that would work, but couldn’t.

We’re now at Just Cats getting some work done, and Laurent, our project manager, suggested trying the “old guy” at Southport Hardware on SE 16th Street, as he may be able to figure it out. Potentially one more thing scratched off my list of 284 things to do!

After talking to a couple other employees, the “old guy” soon appeared and vanished behind the counter for a couple minutes, and emerged with 3 fresh copies of the key! There may or may not have been giggling like a little girl, but no one will confirm it. 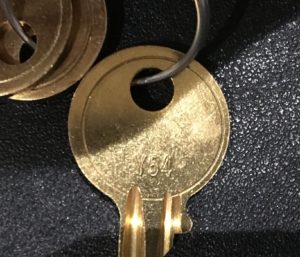 For anyone in the same…boat (see what I did there), the key to use for Leopards of this vintage is Y54 which you can just make out in the picture. 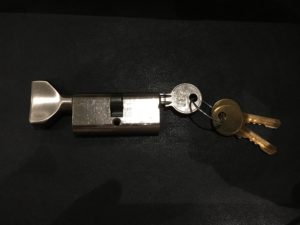 Prior to learning about this place, I had scrounged another lock mechanism, but again with only one key. I had copies made for this one as well assuming someone else will need it.

We’re currently sitting at E Dock in Harbour Towne, likely until December 4th. If you show up with an appropriate bribe, I may be able to locate it.